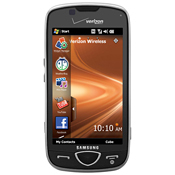 Verizon Wireless is making a bigger push for smartphone users and will soon offer the Samsung Omnia II to rival devices such as the Apple iPhone and the Palm Pre.

The Omnia II sports a massive 3.7-inch AMOLED screen that is larger than most competing devices. The smartphone uses touch interfaces for the majority of interactions, so it comes with an on-screen keyboard for messaging. This is one of the first major releases to use Swype technology for the virtual keyboard, and this enables users to type using continual motions instead of tapping each individual letter.

The handset is powered by Microsoft's Windows Mobile 6.5, and it packs multiple enterprise-grade features including deep integration with Exchange servers, mobile messaging capabilities, and mobile versions of Office.

The OS also gives users access to Microsoft's virtual app store for downloading new programs over the air, as well as a My Phone wireless backup service. The premium version of My Phone also boosts storage space, and adds the ability for users to locate lost devices on a map and remotely lock them or wipe their data.

Samsung's smartphone packs all the features one would expect from a high-end device including Wi-Fi, 3G on Verizon's EV-DO network, access to social networking sites such as Facebook and Twitter, Bluetooth, and a 5-megapixel camera. Verizon will also be loading the device with its proprietary apps for mobile music, video, navigation, ringtones, and other services.

The Omnia II will be available for about $200 after rebates and a new two-year contract. The handset may have some difficulty gaining traction, though, as most of Verizon's marketing push this holiday season appears to be behind the Motorola Droid, which is powered by the Google-backed Android operating system.