A bill in North Dakota will allow non-lethal weapons on police drones. Nothing to fear here, move along. 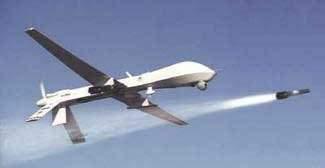 David has been writing on business and technology for over 10 years and was most recently Managing Editor at Enterpriseefficiency.com. Before that he was an Assistant Editor at MIT Sloan Management Review, where he covered a wide range of business topics including IT, ... View Full Bio
We welcome your comments on this topic on our social media channels, or [contact us directly] with questions about the site.
Comment  |
Email This  |
Print  |
RSS
More Insights
Webcasts
Nip Ransomware in the FUD: Detecting Attacks Pre-Encryption
Don't Miss This Cybersecurity Virtual Event
More Webcasts
White Papers
Insider Risk Management: A Better Way to Prevent Data Leaks
Dissonance in Data Security
More White Papers
Reports
Tech Insights: Detecting and Preventing Insider Data Leaks
Key Strategies for Managing New Risks in Cybersecurity
More Reports

Yes, drones could be used for intelligences gathering, surveillance.  Drones could support police agencies in other areas not just shooting.  I would really like to see how police agencies are using new technologies to help them improve their current process and activities.  Sure, body cameras are good, but i'm sure there are other things that could make police work more efficient.
Reply  |  Post Message  |  Messages List  |  Start a Board

@SunitaT0: Legalizing drugs would be better way to destroy drug cartels. Bankrupt them.

How many liquor smugglers were around after the Volstead Act was repealed? None.

I ahrew with you david. Id rather have the guy controlling the drone pepper spray or taze me than an officer accidentally shoot me with his service pistol because he meant to grab his tazer...
Reply  |  Post Message  |  Messages List  |  Start a Board

I just mentioned in the comments of your 3D-printed-fish article how 3D printing could be the 'next' regulatory nightmare after drones, but let's not forget... this regulatory nightmare is still ongoing. People's privacy being violated is nothing compared to the issues on the table here. Some recent laws say that drone operators have to remain in visual range of the drone, which cuts out a lot of the gray area... but how do you enforce that? Can police really track down operators who aren't following this? Do they have the manpower to chase every drone down (considering most of them are harmless)? No shortage of tough questions here.
Reply  |  Post Message  |  Messages List  |  Start a Board

@yalanand: yes drones can be hacked, but the worst case scenario would be when somebody is pointing a gun at you in a hostage situation and there is no drone to put him down.
Reply  |  Post Message  |  Messages List  |  Start a Board

@David: like infiltrating a high value target's lair, which would be overly guarded. Drones would be useful in destroying drug cartels.
Reply  |  Post Message  |  Messages List  |  Start a Board

While I was in Detroit, I had a really bad experience with an officer of law. There was some unrest, people were protesting something, I was at a diner and suddenly I saw the policeman beside me cocked his gun and went outside to see what the commotion was about. He came in when he saw it was a peaceful protest, did not holster the gun, put it down beside me and kept munching his sandwich. I had never seen a gun before and I was shivering at the thought of how this cocked gun would go off and kill me. I had to ask the lawman to holster it because it was freaking me out.
Reply  |  Post Message  |  Messages List  |  Start a Board

I think there should be gun control laws imposed on the public. Some businesses would be damaged, true, but mugging and murders would be lessened.
Reply  |  Post Message  |  Messages List  |  Start a Board

I wouldn't like for drones to be in the hands of people who are stressed out and bored.  I bet police departments will be held liable if their drones harm innocent people's life. I agree with you David, if there is a situation where an officer's life will put his life in danger, then our drone police force will go into action.
Reply  |  Post Message  |  Messages List  |  Start a Board

@impactnow- Right. if used properly, they should only be used in situations where an officer is not the best option. But we've seen technology misused before.
Reply  |  Post Message  |  Messages List  |  Start a Board
Page 1 / 2   >   >>
Editors' Choice
Hot Topics