Where Cars Fit In The Future - InformationWeek

Cities are crowded, and in the years ahead, the transportation industry will have to adapt as more markets have less room for private cars.

People around the world are moving from rural to urban areas. And if they prosper, as economic trends suggest they may, many in this emerging middle class will want cars.

But there's not enough room. Separate reports from consultancies Deloitte and McKinsey suggest mobility in urban areas will have to change to accommodate a population growth that makes traditional automotive ownership increasingly expensive and impractical.

In San Francisco, where traffic congestion is said to be the second worst in the US, city policies and projects aim to get people out of personal cars. Selected street lanes have been painted red and restricted to buses and taxis. Bike lanes have been added. Streets are being torn up to accommodate the Central Subway, an underground transit extension. Construction continues on the new Transbay Terminal, which will accommodate high-speed rail.

In larger cities, driving, maintaining, and parking cars can be even less appealing, which is why car ownership in New York and Tokyo is so low.

The auto industry has been aware of the issue for years, though its attention has been piqued by the rise of ride-sharing companies and technological challenges from the likes of Google and Tesla. 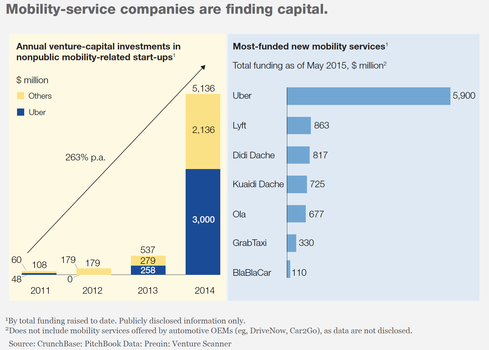 In 2012, Ford Motor executive chairman Bill Ford, Jr., talked about the need for technology to prevent global gridlock. That same year, BMW's venture group invested in Embark, a mobile app to simplify travel by mass transit, as part of its "vision for mobility in big cities." At CES 2015, Ford CEO Mark Fields described how Ford aims to be both a product and a mobility company, an acknowledgement that transportation may have to become a service rather than a purchased product in crowded urban areas.

Stefan Knupfer, a director at McKinsey's sustainability practice and co-author of "Urban mobility at a tipping point," in a phone interview with InformationWeek said big cities have two major problems: traffic congestion and air pollution.

United Nations figures suggest that 7 million people die prematurely each year because of air pollution, partially as a consequence of transportation policy. The organization also projects that migration from the country to the city will add another 2.5 billion people to urban populations by 2050. Though close to 90% of this growth is expected to be concentrated in Africa and Asia, every urban area has to grapple with how mobility must change to accommodate population growth.

"The situation right now is that cities have to react," said Knupfer.

Is Innovation the Solution?

In-vehicle connectivity will allow drivers to take advantage of real-time analysis of traffic data. That's already happening to some extent through mobile apps like Waze, which relies on crowdsourced traffic information. Waze is working with cities like Boston to share data with civic traffic control systems. But real-time traffic awareness will become more significant with the deployment vehicle-to-vehicle communications systems and related infrastructure. These systems will allow cars to drive closer together and to avoid collisions, among other benefits.

Electrification will bring electric vehicles into the mainstream. Market research firm IHS anticipates sales of electric vehicles and hybrids will rise from 2.3 million vehicles in 2014 to 11.5 million by 2022, reaching 11% of the global market. Developments like Tesla's Gigafactory should accelerate the trend by making batteries more affordable.

[The great electric car race is on: Apple Project Titan: Electric Car May Arrive by 2019.]

Car sharing will help cars spend less time idle while reducing the need for personal vehicle ownership. According to McKinsey, cars are unutilized 90% of the time or more. The firm projects that fully autonomous vehicles, such as those being tested by Google and other