SEARCH
A minimum of 3 characters are required to be typed in the search bar in order to perform a search.
Announcements
Alert
Got some free time? Grow your knowledge from the comfort of your computer for FREE!
Alert
Are you looking to stay on top of IT trends? Check out our FREE webinars and virtual events!
Alert
Planning for 2023? Be sure to check out our upcoming in-person events!
Report
How does your salary stack up? 2022 IT Salary Survey Results Revealed
PreviousNext
Government
8 MIN READ
News

If there is one place where 3D could have an impact, it's on mobile phones.
Fritz Nelson
Vice President, Editorial Director InformationWeek Business Technology Network
August 06, 2011

The future success of 3D is uncertain. But if there is one place where 3D should have an impact, it's on mobile phones.

For several weeks, I've been using the HTC EVO 3D, available now from Sprint, and also an early version of the LG Thrill, expected to be available later this month from AT&T. I'm not ready to jump on the 3D bandwagon yet, but these phones are turning out to be an instructive experimental platform for both consuming 3D content -- from 3D games to 3D movies -- and for creating it.

The phones are only a part of the equation. I'll provide a bit more depth on them in Part 2 of this 3D series. First, some of the market challenges for 3D, and then some details on what Google/YouTube is doing with 3D.

A report from NPD's DisplaySearch estimates that about 3.2 million 3D TVs would be sold in 2010 , but the prospect for 2014 was 90 million. That represents more than 40 percent of flat panel TVs shipped. These numbers appear to be based on taking manufacturer exuberance with a little consumer temperance.

Now that putting 3D capability into TVs is only a fractional added expense (the cost of glasses aside), 3D TVs now run roughly $150 more than your everyday HD TV. Whether or not people actually care enough to consume 3D content is another matter.

These dynamics plagued HD, yet the economics of HD content and technology make sense today. Natural adoption drove those dynamics, and that adoption happened because it was pretty easy for viewers to see the stunning quality difference between standard definition and high definition content. The impact was immediate.

Contrast that with 3D, which seems like a gimmick. Done too much, it can be distracting, or worse.

3D faces the same economic challenges that HD did, but it faces some additional hurdles. First, creating 3D content is different. For HD, it was just a change in equipment. 3D also requires different equipment, but shooting 3D content requires thinking creatively about how to exploit that third dimension. That is to say, the artists must adapt, learn new skills, and experiment. 3D images often contain more data than HD content, which impacts data storage and content rendering time for content creators.

Second, not every consumer enjoys 3D content. For many, it induces dizziness, sometimes leading to nausea. For others, it's unwatchable. For some people who wear glasses, it creates even more complications. This downside has yet to be solved, and it affects a larger percentage of the population than anybody cares to admit.

There are different techniques for presenting images to each eye. Anaglyph and polarized glasses provide filters, alternately blocking what each eye can see. Active shutter glasses work differently, using darkness and light to present image perspectives. With all of these approaches, your brain puts these images together in a way that makes the content appear three-dimensional. 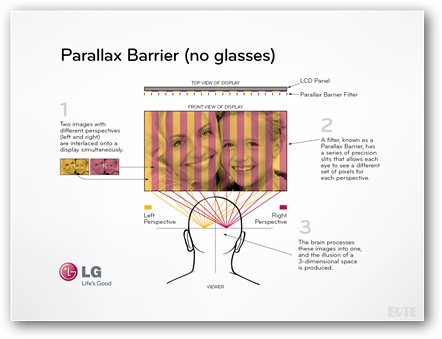 Parallax barrier technology doesn't require any glasses at all. Instead, while the same concepts apply, a filter built into the display contains uniform slits that sit behind the LCD and control what each eye sees. This is the technology that companies like HTC and LG are using in their smart phones.

As the technology gets better, we should start seeing more 3D content, but not just in the theatres or on special 3D TV channels.

In my attempts to find more chickens -- or is it eggs? -- I went to YouTube, thinking there had to be some 3D content there, and indeed there was. Turns out Google software engineer, Peter Bradshaw, has been spending part of his "20 percent time" thinking about DC. Google asks employees to think about innovative ideas about 20 percent of the time.

Bradshaw told me he got the idea for 3D on YouTube after the Monsters vs Aliens Super Bowl 3D glasses giveaway in 2009. Turning to YouTube, he found there was already a lot of 3D content, but he could only see some of it because his glasses were of the yellow and blue variety (there are several types). He wondered if YouTube could create a way for anyone to view 3D content regardless of the glasses, or even display type. So he set out to create a solution.

Now, on YouTube, you can select 3D as an option for your video search. Just type your topic into the YouTube search bar and then select the Filter & Explore option and select 3D. 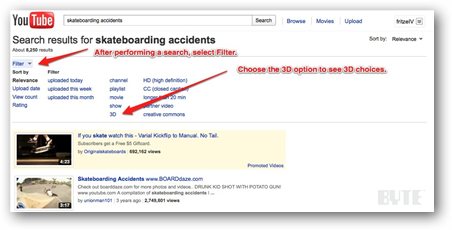 YouTube's 3D channel is a curated channel of 3D content. Although Bradshaw says a great deal of the 3D on YouTube is user experimentation, the introduction of 3D-capable phones like the HTC EVO 3D and the LG Thrill are starting to enhance what people are uploading.

Originally Bradshaw rigged two Flip cameras together to create a video blog about the new 3D services on YouTube and, in fact, many budding video jockeys will do this in the absence of a 3D video camera, essentially mimicking the process and synchronizing the output from the two cameras in the final production.

Also, GoPro makes a 3D helmet camera for $99 (note to self: buy one!), and skateboarders and other outdoor types are starting to employ them; no word when skateboard riding English Bulldogs will get into the act. One company in Santa Barbara has even used a 3D camera to show surgeries, including one on a brain aneurism, Bradshaw said. 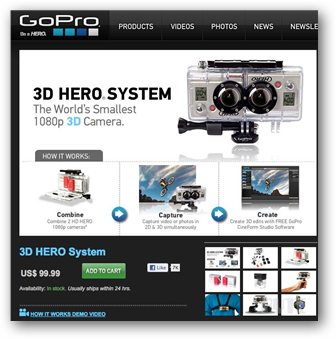 A YouTube spokesperson said that in the past three months, the number of 3D videos uploaded to the site has doubled.

YouTube has also created a way for you to select your 3D mode, choosing from the type of glasses (red/cyan, green/magenta, blue/yellow) and the type of 3D TV or monitor.

It also supports NVIDIA's 3D Vision, which is a combination of the company's software, glasses, graphics processor and certified displays. 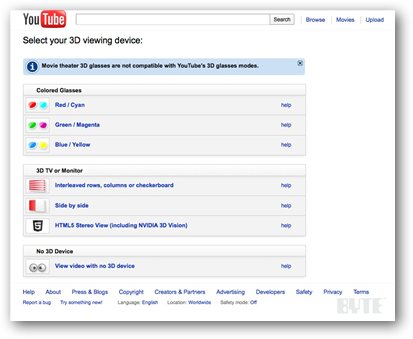 YouTube built these features over time based on end user feedback (and critique), Bradshaw said. Admittedly, though, none of this is that easy to find yet. You have to know it's there.

On my LG Thrill device, many 3D items were rendered unusable. For example, the YouTube app doesn't provide the same options, and visiting YouTube through the browser simply provided a less-endowed, mobile version of the YouTube site. Of course you can select the desktop version of YouTube in the browser. Some of 3D videos I found on the 3D channel appeared as two separate images on the Thrill, although I did find many 3D videos that played correctly and worked fantastically. In other words, it's a work in progress. Let's hope someday these phones will see a YouTube 3D app.

In March 2011 YouTube even built Edit 3D, which is designed on the YouTube video editor code, but not directly connected to it. The main purpose of Edit 3D is to sync two video streams (it uses the audio tracks) to produce a 3D video. Obviously this doesn't apply to those who have 3D video cameras.

But really, YouTube just wants 3D to be simply another type of video. In fact, Bradshaw said, the company is committed to making 3D just another video tag type in the browser. Naturally, it is pushing WebM, which it calls an open video format. WebM is the outgrowth of Google's acquisition of On2, and part of the company's attempt to get the industry behind its video encoding platform (VP8).

Existing technical challenges will be overcome. Costs will go down. We've seen that trend in consumer electronics for dozens of years. Many enthusiasts believe that 3D technology will get better, and that the "ah-ha" moment will happen, just as it did for HD.

If 3D is to take off, one thing must happen: It must become accessible for more people. Part of that is cost (the cost of creating and consuming HD content is now incredibly low), but another part involves giving 3D content a cheap outlet. Regular smart phones will help (but not solve) the cost part. And companies like YouTube will become a great experimental outlet.

Stay tuned for Part 2 of this series, where I'll take a closer look at the HTC and LG 3D phones.

Fritz Nelson is the editorial director for InformationWeek, the Executive Producer of TechWebTV, and a contributing editor for BYTE.