Windows Phone 7 Gets Early Thumbs Up 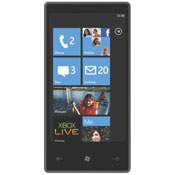 It won't be available for purchase for months, but Microsoft's Windows Phone 7 is already drawing heaps of praise from pundits and bloggers who think devices based on the mobile operating system will be potential Apple killers.

"Sod the iPad," said JMacDonald, on a forum maintained by the blog MicrosoftFeed.com. "I am considering a Windows Phone," wrote MacDonald.

Another Windows Phone 7 customer-in-waiting, writing on an official Microsoft forum, said he was impressed by the device's user-friendly interface. "When I checked the videos and other stuff on the Web site I found it amazing," wrote Tarun Juneja. "I was waiting for real touch to arrive," said Juneja.

Over at the popular tech blog EndGadget, first impressions were also largely positive. "This is gonna be a winner; I think Microsoft is on track with its recent products," said forum member UnWynd.

The question, of course, is whether the early, glowing feedback will translate to long-term satisfaction and market-share gains for Microsoft in the mobile device market when Windows Phone 7-based devices ship this holiday season.

Microsoft CEO Steve Ballmer, for one, is convinced that the software is a game changer.

"In a crowded market filled with phones that look the same and do the same things, I challenged the team to deliver a different kind of mobile experience," said Microsoft CEO Steve Ballmer, during a presentation Monday at the Mobile World Congress 2010, in Barcelona.

"Windows Phone 7 Series marks a turning point toward phones that truly reflect the speed of people's lives and their need to connect to other people and all kinds of seamless experiences," said Ballmer.

Most notably, Windows Phone 7 Series features a start screen that rejects static icons in favor of real-time feeds from the Internet's most popular social networking sites, including Facebook and Twitter, as well as other applications. It also offers always-on access to e-mail, Xbox games, Bing search, and other tools.

Windows Phone 7 is also, effectively, a "Zune phone." Microsoft chose not to slap its MP3 brand on the software, perhaps because Zune has been somewhat of a flop in the consumer market. But users can import their Zune files and other multimedia content into Windows Phone 7's Music and Video hub.

Hubs are what Microsoft is calling partitions in the software that allow users to group similar content. In addition to Music and Video, Windows Phone 7 also has hubs for People, Pictures, and Games.