Microsoft put a six-story Windows phone in one of the world's busiest intersections and filled it with rock bands, dancers, and zombies to make a statement. But time grows short to convince phone users.
Paul McDougall
Editor At Large, InformationWeek
November 08, 2011
The deals are done, a key update has shipped, thousands of apps are available, and this week a 60-foot high Windows Phone occupied New York City. With all this, if Microsoft fails to boost the insignificant--and dwindling--market share of its mobile OS in the next several months, it may have to concede that its daring but risky effort to introduce a truly unique smartphone platform has flopped.

On Monday, the software giant threw a bash in Manhattan, ostensibly to mark the release of three new Windows Phones from Samsung and HTC. But you don't erect a six-story replica of your product in one of the world's busiest intersections and fill it with rock bands, dancers, and zombies just to fete somewhat routine additions to your lineup. No, Microsoft's NYC phone fest was about making a larger statement, which a giant phone parked outside Macy's in Herald Square certainly does. It was to say, "Windows Phone is here, and this time we really mean it." 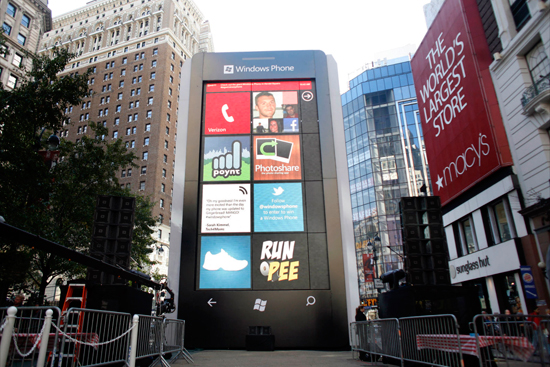 Windows Phone group president Andy Lees practically insisted upon as much during a press gaggle during Monday's events, when he said Windows Phone's inaugural year was never about grabbing big market share. "Our most important goal in the first year was not the sales numbers, the most important goal was about customer satisfaction, it was about starting with a different point of view, it was about building the ecosystem," said Lees. "All of that's gone really very well."

That doesn't quite square with Microsoft CEO Steve Ballmer's admission earlier this year that he was disappointed with Windows Phone sales. But we'll allow Lees that bit of revisionist history because, the fact is, Microsoft has done a creditable job of building an environment in which Windows Phone can thrive.

Thirteen months after launch, there's a marketplace with 35,000 apps, a newly arrived update, namely Mango, which adds 500 new features, and a raft of alliances and partnerships that, according to Lees, has yielded 144 different device-carrier combinations worldwide. And what's surely Microsoft's most key alliance, its hookup with Nokia, is now in effect--even if Redmond is going to have to fork over billions of dollars to the Finnish (but hopefully not finished) phone maker during the next several years to keep it going. To boot, built-in Skype is on its way.

With all this in place, Microsoft can no longer say that Windows Phone is still a work in progress in order to excuse sales numbers that are dismal and getting worse. Microsoft mobile's 5.6% U.S. share as of September, down from 5.8% the previous month, needs to go north in a hurry, because consumers and business users will only invest in platforms they're confident have a future. After all, Microsoft has a history of pulling the plug on products, like the KIN phone, that languish out of the gate.

To boost sales, Microsoft is modifying its marketing tactics around Windows Phone. Lees said it will work more closely with carriers and handset manufacturers to promote individual devices as much as the Windows Phone OS itself. "The way we're doing this is very different from the way we did launches last year," said Lees. "This time around you'll see phones coming out over the next several months from different manufacturers in different parts of the world. And the marketing will happen around each of those devices."

Hence, on Monday, Microsoft said little about Mango, or Windows 7.5 as it's also known--but talked up a trio of new devices: the $49 Samsung Flash Focus and $199 Focus S on AT&T, and the $99 HTC Radar on T-Mobile. The strategy could pay off. Apple fanatics notwithstanding, it may be that most smartphone users just want to have whatever is the hot new device. If Microsoft and its partners succeed in bestowing such "hotness" on their offerings, then they've got a chance.

But if Windows Phone's share remains stuck in the 5% range a year from now, despite all of the above, it will be clear that the market has spoken--and simply rejected Microsoft's attempt to introduce a mobile platform that looks and feels quite different from the standard, icon-centric entries from Apple, Google, and even RIM.

All Windows Phones, regardless of manufacturer, are built around the Metro interface's Live Tiles--big, interactive blocks that deliver real-time data from social networks, email, IM, and other services directly to the home screen. Users can also assign blocks to specific apps. It's a radical departure from what users got used to with rival products. I don't quite buy Microsoft's argument that Live Tiles makes it a lot faster to "get in and get out and get on with your life," as its original marketing pitch promised. But I do think it's an attractive, simple, and easy to use interface.

Not everyone agrees. In its review of the Windows Phone OS, Engadget called it "an acquired taste" and correctly noted that it forces users to vertically scroll through long lists apps and settings menus in order to find anything that won't fit on the Live Tiles screen, which is limited to about seven or eight blocks.

So if Windows Phone is still a distant fourth place in the smartphone race by this time next year, Microsoft and its partners, despite all their efforts, may have to accept the fact that most people just didn't like it. But no one who saw that obelisk of a phone rising up from the streets of New York this week will be able to say that Microsoft didn't try to promote Windows Phone in a big way.