Yammer is officially on its way to becoming part of the Microsoft Office product family that includes SharePoint. How will it fit in?
David F Carr
Editor, InformationWeek Government/Healthcare
June 26, 2012 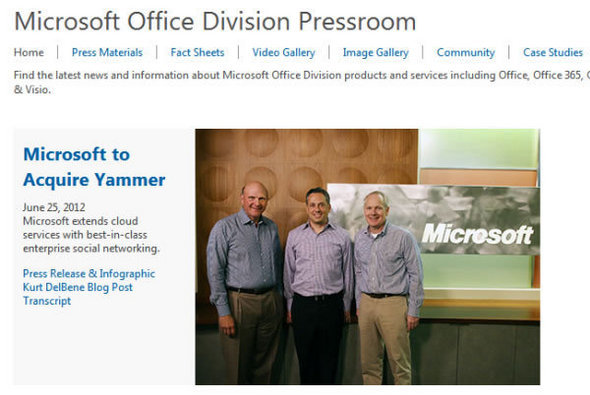 Yammer, the enterprise social network in the cloud that claims more than 5 million corporate users, is about to become part of the Microsoft Office Division.

Microsoft confirmed the $1.2 billion purchase of Yammer Monday, more than a week after credible rumors surfaced of the acquisition surfaced in the business press.

This puts Yammer at the center of Microsoft's enterprise social software strategy, although it will coexist with the SharePoint portal and Microsoft's Lync unified communications platform, both of which offer some social features. Microsoft particularly expects Yammer to join the cloud-based versions of those products in its Office365 online office suite.

Exactly how Yammer will fit in remains to be seen. In the press conference announcing the acquisition, Microsoft Office Division President Kurt DelBene said it was too early to give specifics about how Microsoft will deepen Yammer's integration with SharePoint, or what that will mean for the future of the social features Microsoft has embedded in SharePoint. SharePoint gets limited respect as a social platform, but it does offer base features like profiles and activity streams that consultants and third-party vendors (notably NewsGator) have built on.

Ballmer also expressed great admiration for Yammer's viral adoption model as a sales tool. At the same time, Microsoft will have to address the controversial aspects of Yammer's freemium strategy, which allows employees to join for free but requires companies to pay for administrative control over these social networks.