SEARCH
A minimum of 3 characters are required to be typed in the search bar in order to perform a search.
Announcements
Event
Enterprise Connect 9/27-9/29 - Time is running out, secure your FREE Virtual Pass today!
PreviousNext
Hardware/Architectures
News

IBM's Digital Loan Processing platform, released Thursday, combines analytics and mobile technology to make possible for consumers to track mortgage applications through every step of the process. IBM will sell the service to banks, and believes that it will hold particular appeal for young people buying their first homes.

"The Millennials, Gen Yers, don't really use email, don't know what a mortgage branch looks like and have never seen a fax machine. We're looking to digitize the process for them," said Eric R. Ray, general manager of IBM's financial services sector. He said these younger people were now entering the work force and would be looking to buy homes in the next few years. Their arrival will transform what banks need to do to reach them.

IBM, which spent several years developing this platform, is banking that the platform will do a better job of helping banks change their processes than the banks can do themselves.

IBM's platform aims at the beginning of the loan process, the application. It uses analytics to predict from the start of the process when a loan will actually close, which Ray said should help lenders close more loans, and limit the risks they face about locking in interest rates.

The system also applies analytics to optimize various stages of the application process, and to let borrowers know the status of the various stages of a loan application, much like what people can do when sending packages today. It will also alert them to things they need to do. Ray said that banks have told IBM the current process suffers from simple human error, like documents that aren't sent or are misfiled or otherwise lost. IBM says its new platform should reduce such errors.

At the core of the document problem is a central problem for data users: how to get unstructured data, like the various forms involved in getting a loan, into a structured format. The IBM platform does this work. 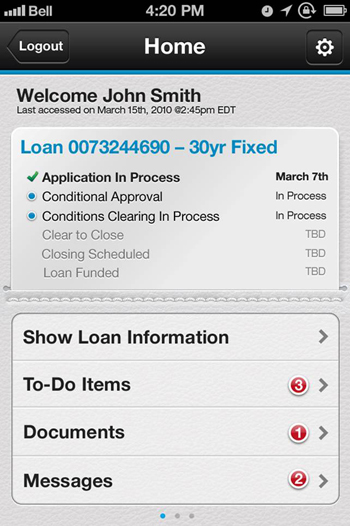 The platform also develops what Ray called a social profile of borrowers by using various attributes of social media. This will primarily let borrowers decide how they want to interact with the bank, for instance via mobile device, a Web portal or the telephone.

Ray said that the Digital Loan Platform should also make the mortgage process more open. That might reduce the potential for a repeat of the debacle of collateralized debt obligations (CDOs) built around bad mortgages bundled with good mortgages and sold as a type of security.

"A lot of investors thought they were buying A-rated bonds and they were something far less than that," said Ray. "As they restart securitization you'll need a level of transparency that didn't' exist."

The Digital Loan Platform is available for the North American market and for two other countries that Raymond declined to name. Although it is a cloud service, Ray said it will not be a flip-the-switch service, because it will require integration with existing systems in place at lenders, and needs to meet rules and regulations that can vary. Ray said there was not a pilot customer for the platform, though individual pieces are in use. No customers are using the platform yet.

He also said the Digital Loan Platform will be optimized for local languages and regulatory requirements across the globe.