7 comments
Comment Now
Researchers are poised to make huge advances in medicine, particularly in how we treat cancer and arthritis. See how big data and IT are contributing. 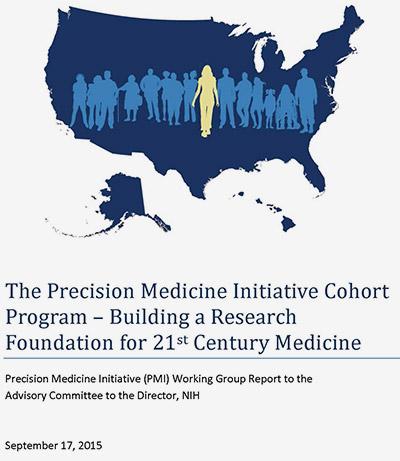 What if we could study the ongoing health records of more than 1 million people to learn which individuals respond to certain types of drugs, are at risk for a certain disease, maintain health and fitness, age, and die? That's the goal of the $130 million Precision Medicine Initiative Cohort Program (part of a precision health initiative, with an overall $215 million annual budget) being done by the National Institute of Health. The goal is to enroll over 1 million Americans in the cohort in the next three to four years. The data (anonymous, of course) from all 1 million individuals will be furnished to any interested researcher who wants to study one of the largest cohorts ever made available.

All members of the cohort will have their genomes sequenced, and their health history, lifestyle habits, and environmental exposures tracked. By doing so, the study will yield a treasure trove of big data. It will allow people to track the effectiveness of medicine based on genetic markers and identify certain biomarkers that signify that people might be at risk for a given disease.

The cohort could also serve as a platform for smaller trials. For instance, if you needed 100 people with a specific genetic trait who are also taking a certain drug, it could take years to develop a cohort for a study. The Precision Medicine Initiative may be able to identify the people you need in minutes. The NIH also aims to use mobile apps and information from the trial to help the people in the trial lead healthier lives. The agency hopes that by their example they will encourage healthier lifestyles in the general population. IT's advances in mobile devices, cheaper genome sequencing, databases, big data, and electronic health records make knowledge and health goals possible.

This is a great example that any type of business can use to empower better customer engagement. The data is there, organizations just need to understand how to ask the right questions to learn more about their customers and identify opportunities to personalize when appropriate. Peter Fretty, Idg blogger for SAS
Reply  |  Post Message  |  Messages List  |  Start a Board

How do you identify 100 candidates with specific characteristics for a trial if the data is anonymous?
Reply  |  Post Message  |  Messages List  |  Start a Board

David, that's an issue that got a lot of play a few years back. But you don't hear too much about it anymore. It's pretty darn nasty the level of chemical pollution in our water --- hormones, antiobiotics, painkillers, anti-depressants. You name it. What's worse, the pharma waste or the plastic waste? We're all being experimented on on a regular basis.
Reply  |  Post Message  |  Messages List  |  Start a Board

@whoopty- you are right about the dosage. Doage should also help with antibiotic resistance and with drugs polluting our water supply. There are an amazing number of drugs in our water supply.
Reply  |  Post Message  |  Messages List  |  Start a Board

@gary_el- It should be a lot cheaper and easier at least for a while. The first thing I think will happen is that pharmaceuticals will probably go back to a lot of dead end drugs that seemed to work on one set of patients and not another to see why that was so. Could recoup a lot of money and save a lot of lives. In the end, though, once we grab a lot of the low hanging fruit, I think we'll be back to the usual brilliant science as the starting point.
Reply  |  Post Message  |  Messages List  |  Start a Board

It's really good to see personalised medication becoming the big advancement in 21st century medicine, as it makes a lot of sense. We all have vastly different bodies, so of course treatment won't work for everyone. However I'm also interested to see improvements in dosage with this sort of data tracking.

When I had my eyes lasered to improve my vision, they took a map of my eye and tailored the treatment to me, but when I get a prescription for some medication, it's the same that I'd get if I was a woman, or twice the size. Tailoring dosages could also help reduce side effects and improve effectiveness of medication I feel and I'd like to see more of it in the future.
Reply  |  Post Message  |  Messages List  |  Start a Board

Well, maybe not quite that big, but with Big Data sweeping up results, statistics, genomes and everything else, it's a whole new chapter in the story of statistics. Data and biological scientists can look for inferences and correlations over a vast universe of situations. The data they may look at need not even have been gathered for the purpose at hand. But it's there anyway, and it may be useful now.

This is akin to what's starting to happen in the Industrial Internet, where what might seem intractable in one jet engine might show a pattern if it happens to six out of one-hundred. Let's look and see what's different in those six, and then it'll be so much easier to find out why.

What's so striking here is you rather than starting out trying to solve a problem with pure, brilliant science, now you can start just looking over happenstance harvested by Big Data and crunched in supercomputers. Science's job will then be a lot simpler, faster and cheaper.
Reply  |  Post Message  |  Messages List  |  Start a Board
Editors' Choice
Hot Topics