A Florida hospital says electronic tracking of nursing personnel is helping it refine their workflow and work habits and lay the groundwork to replace the obsolete "midnight census" method of determining staffing requirements.

Florida Hospital Celebration Health is using Real Time Locating System (RTLS) tags and sensors from Stanley Healthcare, a division of Stanley Black & Decker that provides inventory, security, and safety products for the healthcare industry. Like GPS, RTLS is location tracking technology, but with greater precision for tracking movements within a building rather than across the globe. Stanley's product is based on the 2012 acquisition of AeroScout. The hospital initially signed up with AeroScout for a 2011 pilot of the technology in a 32-bed surgical unit and has been "continually, slowly expanding it" to other units ever since, according to Ashley Simmons, director of performance improvement. This summer, the nurse tracking technology is slated to move into the emergency department.

The Celebration Health hospital in Kissimmee, near Orlando, is part of the Florida Hospital network, which in turn is part of Adventist Healthcare. Celebration Health is also "a flagship for innovation and IT" within the system, Simmons said. After a half-dozen years of using AeroScout technology for asset tracking, as in equipment, the hospital decided to explore how it could be applied to nursing and "the people assets" in within the hospital, she said in an interview. 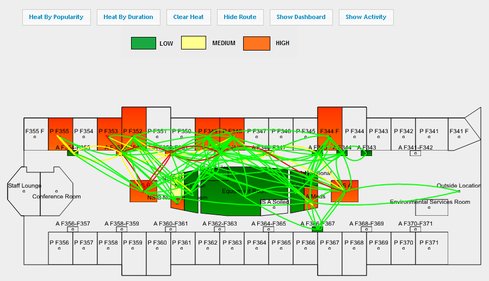 Nurses, support staff, and a few cooperative doctors wear location tags that attach to their name badges, broadcasting an ultrasound signal that is tracked through sensors in the ceiling. This allows tracking of the movements of the staff on duty, which can be analyzed in a "heat map" view that shows the areas of greatest activity. This makes it possible to pinpoint the location of the most demanding patients and identify tasks that may have been distributed inefficiently across the workforce.

"The goal is to figure out how we can streamline workflow and understand the way we are utilizing staff," Simmons said. While the Big Brother implications of this monitoring bothered some nurses, over time they grew to trust assurances that the system would not be used in a "punitive" way, Simmons said.

"They were told they did not have to wear it, but if they did it would help us," Chief Nursing Officer Patty Jo Toor said in an interview.

The staff movement analysis turns out to produce a very different picture of the workload on a nursing unit than the traditional method of counting how many patients are in hospital beds as of midnight.

"What we see in our units is we're underestimating it -- although that may not be true of every unit of every hospital," Toor said.

While the hospital has not yet progressed to the point of reallocating staff based on the movement sensor analysis, it has found opportunities to redesign inefficient workflows. For example, the patient care technicians responsible for taking used IV pumps to be sterilized had been performing that task at 6 a.m. -- except that they complained there was often too much going on at that time, during the bustle of getting patients ready for discharge, for them to take care of that chore. "We could see that they were not quite so busy between 1 and 3 a.m., so we told them to return the majority of the pumps between 1 and 3, so the job can get done when they're not so busy," Toor said. Maybe someone should have been able to figure that out without the help of a computer system, "but when you're in the middle of it, sometimes you can't see it," she said.

In other cases, a nurse might be assigned to care for two patients at the opposite side of the hallway, and the RTLS visualization dramatizes the time spent racing back and forth, which could be a reason to move one of those patients or juggle assignments. One way Celebration Health won acceptance for the system from nurses was by allowing to see their own data, which they can view through a web portal. "It helped them understand how they could have a better day by the way organized themselves better. You might go home and feel you had a really rough day, but with this you can see I really did have a busy day -- I had these types of patients, and that's why it was so rough," Toor said.

Getting this data on activity in the emergency department will be particularly useful for planning out workflow, Toor said, and making operations there more efficient is a high priority. "I want to see how we're processing patients through the ED because the longer they stay there, the more unhappy they are," she said.

To analyze the data gathered by the location tags, Celebration Health uses software provided by Stanley Healthcare and its partner Tableau Software, but internal IT and analysts also do some additional work with the data. Correlating the movement patterns with data from the hospital's electronic health records system -- which would show who was in the room at the time a nurse visited it -- is so far a manual process, although the longer term goal would be to have the two systems integrated, Simmons said.

"We want to break the patient stay down into touch points, so we can see how many touch points did that patient have with staff during the stay," Simmons said. In the context of the trend toward value-based purchasing of healthcare services, she said, "we want to show what did we do to provide the best value for each patient while they were here."

What's the best way to introduce this kind of personal motion detection tech so it seems useful rather than intrusive? Will be interesting to see if this hospital is able to make the jump from nurses using the tech to getting doctors to accept it.
Reply  |  Post Message  |  Messages List  |  Start a Board

I'd love to hear from a nurse here on the pros and cons of such an arrangement. This story reports the amount of running nurses were doing was underestimated. To me that is not surprising.
Reply  |  Post Message  |  Messages List  |  Start a Board

A representative of Florida Hospital asked me to clarify that the "heat map" visualization was created by the hospital IT staff -- it uses the data from the Stanley Healthcare AeroScout system, but it's not something you get out of the box with the product.
Reply  |  Post Message  |  Messages List  |  Start a Board

Custom coding isn't dead, as your example shows, David. It's very hard for companies to get the exact "solution" they want even from industry-specific vendors. As companies dig into Internet of things & people like this, they can't expect vendors will know their needs. Those needs are just too industry, company, process specific.
Reply  |  Post Message  |  Messages List  |  Start a Board

It sounds like the location tracking system is measuring general workflow patterns for the greater good of the staff and patients. I hope that'll always be the goal and tracking doesn't become a lazy way to judge an individual nurse's work performance. There are too many intangibles in the job -- like bedside manner and emotional support -- that count for a lot.
Reply  |  Post Message  |  Messages List  |  Start a Board

Good point. To some extent, correlating activity with EHR records might help, although that's not typically going to be a minute-by-minute record of what was going on in a given room. Probably the data will be most useful to supervisors who already have some knowledge of what's going on in the nursing unit and can interpret it correctly, make staffing adjustments as needed.
Reply  |  Post Message  |  Messages List  |  Start a Board

They did say that they had not yet used the data to adjust schedules, but they were thinking about it. Maybe you're right that the result won't be a net gain in number of nurses employed, but it could be a matter of shifting people from one shift or unit to another based on a better analysis of where the greatest need is.
Reply  |  Post Message  |  Messages List  |  Start a Board
InformationWeek Is Getting an Upgrade!