SEARCH
A minimum of 3 characters are required to be typed in the search bar in order to perform a search.
Announcements
Alert
Got some free time? Grow your knowledge from the comfort of your computer for FREE!
Alert
Are you looking to stay on top of IT trends? Check out our FREE webinars and virtual events!
Alert
Planning for 2023? Be sure to check out our upcoming in-person events!
Report
How does your salary stack up? 2022 IT Salary Survey Results Revealed
PreviousNext
Healthcare
5 MIN READ
News

Other academic medical centers have endeavored to use patient records to feed their clinical research machine, but the information feeding Clinical Query is more comprehensive. The data on patients' medication use, for example, is more complete than found elsewhere because of the way clinicians at BIDMC are required to track patients' drug intake. Similarly, because BIDMC has been using an EHR system since 1985--long before the industry got hip to EHRs--it has an impressive amount of longitudinal data per patient.

Clearly, the culture at BIDMC is to be a first IT mover. Halamka is proud of the fact that it was the first hospital "to go live with iPads in clinical care. We did it one hour after they were invented." BIDMC staffers went down to the Apple store, bought the tablets, and put them to use in the hospital's emergency department. That may not sound especially bold in today's healthcare environment, but in early 2010 it was fearless.

More cutting edge was the hospital's custom EHR system, called Online Medical Record. Halamka is quick to point out: "We built it ourselves. I wrote part of it. It's Web-based, cloud-hosted, runs on tablets. How many EHRs in the world have those characteristics?"

In practical terms, that means physicians can easily access a patient's text records and images from anywhere in the world. And all of the hospital's patients can likewise get access to all of their data. They can also have secure email conversations with their doctors and renew prescriptions online, even see their doctors' calendars to book appointments most convenient for them (rather than their clinicians).

De-identifying the records was the most obvious precaution, but the nature of the Clinical Query search engine required more. 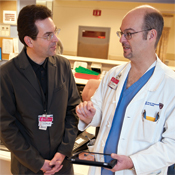 BIDMC was the first hospital to use iPads in clinical care, says Halamka (left, with Dr. Henry Feldman)

Suppose for argument's sake that a BIDMC employee wants to snoop on his neighbor. The neighbor happens to have one blue eye and one green eye (a unique identifier), and the employee wants to know if he's on anti-psychotic meds. The employee could create a query that lists all blue-eyed, green-eyed people taking mental health medication, in which case there's a good chance the neighbor's confidential data would show up. To prevent such unlawful snooping, Clinical Query always throws in a few additional arbitrary patients to the search results, creating just enough ambiguity to keep patients' secrets secret. Normally, a database search is supposed to give precise results, but in this scenario, the researcher's initial goal isn't supposed to be to identify individual patients, but to find correlations between diseases and risk factors.

Still, the hospital's institutional review board initially was concerned that giving all hospital employees--rather than just physicians--access to Clinical Query was unwise. The IRB feared that "people will share data of a competitive or embarrassing nature," Halamka says. BIDMC jumped that hurdle by requiring all employees to take a HIPAA training course so they understand their obligation under federal law to protect patient privacy and understand what information they could legally reveal.

A major technological obstacle to making Clinical Query fully functional centered on the variable nature of medical terminology. As a matter of contrast, there are only six data elements in the average ATM transaction, but the average patient record contains about 65,000 data elements. Complicating matters further is the fact that different clinicians may define each element differently.

"There's huge uncertainty about what each data element means," Halamka says. A simple term such as "fever" may mean different things to different docs. Likewise, some clinicians may define hypertension as a blood pressure above 120/80, while others use different numbers. To get meaningful search results to track disease trends or correlations between risk factors and disease, researchers need consistent terminology.

With that challenge in mind, BIDMC created a hierarchical ontology of language, in effect a tiered list of precise definitions of medical words. And then every patient record had to be mapped to this ontology.

A simple example illustrates the tangible benefits of putting such an ontology in place. In 2004, Merck announced the voluntary worldwide withdrawal of Vioxx (rofecoxib), an arthritis and acute pain medication, because a clinical study that took more than a year to perform revealed patients on the pain killer were at increased risk for heart attack and stroke. Had investigators input the terms "rofecoxib" and "cardiovascular disease" into Clinical Query, it would have taken about a second to find that connection.

It's hard to match the innovations that have come out of BIDMC and the rest of the Harvard healthcare family. "We were the first Web-based health record, the first computerized provider order entry system, the first to use iPads," Halamka says. Asked why the Boston hospital chooses to be on the cutting edge of information technology, he jokes: "It's so cold and miserable here six months of the year, there's nothing else to do but work." That work benefits not just the patients BIDMC serves, but the entire U.S. healthcare system.