Two experiments in reading and translating brainwaves have allowed researchers to help an injured man walk, and enabled others to read minds from over a mile away.

Maker Faire: 9 Projects That Will Inspire You
(Click image for larger view and slideshow.)

Quick! What am I thinking?

If researchers at the University of Washington have anything to say about it, you'll soon know because I'll be able to transfer my thoughts to you over the Internet. And if that's not enough cool for one week, researchers at University of California, Irvine, have helped a man walk after a spinal cord injury by translating his thoughts into movement for his legs.

We're getting closer than ever to decoding and using human thought in all sorts of new technologies.

Let's start with telepathy. To be 100% accurate, telepathy isn't the right word. When we think of telepathy, at least in a sci-fi sense, it is transmitting thoughts or images directly from one brain to another. In the University of Washington study, the Internet was the conduit between two brains.

[ There are more dangerous things to do with the brain. Read Predicting Your Future By Scanning Your Brain. ]

The researchers connected volunteers over a mile apart via a special cap and an Internet connection and asked them to play 20 Questions. One volunteer would be shown a picture of an object. Another volunteer over a mile away would send a question via a touchscreen to the first volunteer. The electroencephalography (EEG) cap on the first volunteer translated "yes" or "no" answers back to the guessing volunteer. A special device would translate the answer and, using a signal to stimulate a part of the brain, would "send" the answer to the second volunteer's brain. They could then ask more questions until they could make a guess.

The volunteers were able to guess the object 72% of the time, versus only 18% during control rounds.

Here it is in action:

As you can see, it is still a rather slow process. Of course, it works mostly by pushing a cursor in our mind, than really processing language. So there's a long way to go, but this is believed to be the first brain-to-brain connection made through language.

Previously, the same research team was able to connect two people using similar EEG caps to allow one person to move the body of another person.

University of Washington researchers used this experimental rig to allow a person to control the hand of another person from a distance.

The key for both the movement and the language is to refine the signal. These experiments are both proof of concept, but they have a long way to go to be truly useful.

How useful could it be? An experiment at UC Irvine made a man walk again after seven years of paralysis. The concept is fairly simple. We know that the brain sends signals to the muscles to move. When the spine is injured, it cuts off those signals, but it doesn't stop the brain from being able to make those signals. So, if you can send those signals via another route, they should work.

UC Irvine researchers needed to locate the part of the brain that controlled the man's walking so they had him "walk" using a virtual reality game until they could capture the signals. Then, using similar EEG technology, they captured and transmitted those brain signals through electrodes into the man's muscles.

Sure, it is a bit jerky and he needs a walker. But this is a man taking his first steps since a horrible accident. The researchers will probably be able to refine the signals over time. They are looking to expand the trial from a single person to 30 people. It represents an amazing opportunity to bring mobility back to people who have lost it.

What else can this technology do? For starters, I'd imagine it could replace our phones. A little brain implant (or funny hat) and a WiFi signal is all you'd need once we learned to parse the language more completely. 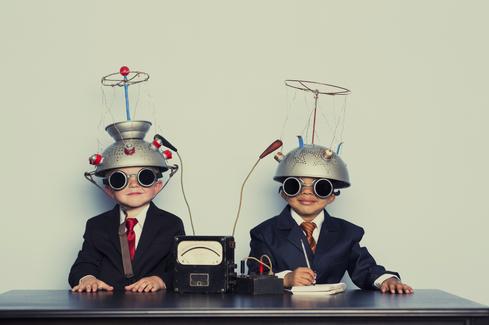 I could also see this being used to replace typing and even voice activation on computers. Do you think faster than you type? I do. Imagine that big report you spent all night writing simply appearing on the page because you had a computer hooked to a skull cap.

This is one way to make artificial limbs. We've seen it already happen. We actually think we can refine them to the point we can restore sense of touch. Sending signals from the brain to the computer was one step. Now, sending them back to the brain is the next step.

Of course, we've seen cars get hacked. Imagine if your thoughts were hacked, or your artificial limbs were hacked. I mean, someone is going to do it, if only to make someone dance to "Uptown Funk." It is a frightening future, but I suspect one which people would be willing to face to get their mobility back.

How far away are we on this? Probably depends on what you want to do with it. We have decades probably before we are able to refine the walking capabilities. First the trial has to expand, and then it needs approval. Then someone has to learn to mass produce it and incorporate it into basic therapy. We're also far away on telepathy as a communication device.

But we are starting to see more mind-controlled devices. Perhaps we'll see mind-to-computer technology advance in the next few years, so we can think about producing it for some specialty industries. No matter what, it has a promising future, so long as the security concerns can be worked out.

David has been writing on business and technology for over 10 years and was most recently Managing Editor at Enterpriseefficiency.com. Before that he was an Assistant Editor at MIT Sloan Management Review, where he covered a wide range of business topics including IT, ... View Full Bio
We welcome your comments on this topic on our social media channels, or [contact us directly] with questions about the site.
Comment  |
Email This  |
Print  |
RSS
More Insights
Webcasts
Unifying Your Endpoint Security Strategy
Using Cyber Underground & Blockchain Intel to Stop Cyber Attacks
More Webcasts
White Papers
Case Study: Leading Financial Institutions
The 2021 Security Outcomes Study
More White Papers
Reports
Privileged Access Management Checklist
Gartner's Top 9 Security Trends in 2020
More Reports

@zerox203- I think the light for yes and no light for no makes sense. We use technology to help us interpret stuff all the time. Cars don't have go lights and brake lights. They only have brake lights. That said, you are right that if they don't feel like they can successfully differentiate "yes" and "no" they have a long way to go to get to full sentences. Still, this is a proof of concept, not a full-blown product.
Reply  |  Post Message  |  Messages List  |  Start a Board

@Terryb- Ha! Right now, the answer is that lying is still possible because you have to concentrate for the signal to work. You move the cursor with your mind to a yes or a no. And then the signal is sent. But as we get better at this, it might not be anymore.

I think there are multiple sci-fi shows about just what happens when humans get telepathy at first. It almost always leads to fights because our thoughts aren't as polite.
Reply  |  Post Message  |  Messages List  |  Start a Board
InformationWeek Is Getting an Upgrade!