50%
Tweet
Emergency room patients whose doctors consult their records through a health information exchange were 30% less likely to be admitted, says a Cornell study.

Emergency department physicians are less likely to admit patients to the hospital unnecessarily when they make use of a consolidated medical record, researchers found in a study published Wednesday in Applied Clinical Informatics.

The study shows that the significant investments New York State has made in health information exchanges (HIEs) at the regional level does, in fact, benefit patients by providing doctors and other healthcare professionals with immediate access to patient records, said Dr. Joshua Vest, an assistant professor at Weill Cornell Medical College and the lead author on the study.

After statistical corrections for the conditions of different patients, the study found that the odds of admission were 30% lower when doctors consulted records from a regional HIE, and that the associated savings equated to $357,000. This was based on a review of claims data for 15,645 New York adults who had an emergency room visit within a six-month period and who had consented to participate in a regional HIE -- specifically, the Rochester Regional Health Information Organization.

Even though all the patients in the study had records available through the HIE, the system was consulted during just 2.4% of those visits. However, those were the visits that had a significantly lower rate of admissions. "Yes, the level of usage was not very high, but it was consistent with what other exchanges see," Vest said. The point is that, "when it was used, it had a beneficial effect on utilization."

Typically, doctors may consult an HIE at their own discretion. When they do not, it can be out of reluctance to use the technology, but not always, Vest said. "For some patients, there is clearly no need. If someone presents with a broken arm, it's a broken arm -- that wouldn't indicate a need to look up all the lab values, look up the history." 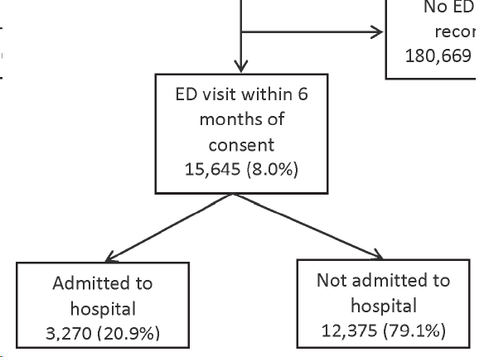 Chart excerpted from the study.

When doctors do use the system, they typically are looking for background on a more complicated case in which they have a theory about treatment that prior lab results and medical history might help support. In the absence of access to that information, they might be more likely to order a patient admitted for tests -- even though the same tests might have been performed in the past at another facility -- or otherwise settle on an admission as the more conservative course of action.

Emergency departments don't have access to all historical labs, so without an HIE, it would be too difficult and time consuming to get better information to support or refute a treatment hypothesis, Vest said. HIE data doesn't help doctors make decisions as much as it provides them with data to support their decisions.

The study supports the proposition that community-based HIEs are valuable at a time when many are struggling financially as federal support dries up. Many hospital technology leaders are putting more emphasis on developing their own private HIEs for data exchange. Vest said he has not specifically compared public with private HIEs, though that might be an avenue for future research.

Other academic studies have cast doubt on the value of community HIEs, but Vest said one explanation for the discrepency is that his research focuses on actual use of HIEs, rather than institutional adoption. The organization's endorsement of the technology, while important, "is frequently independent of the acceptance or usage of individuals within the organization."

In addition to influencing hospital administrators and government policy makers, perhaps the study will show doctors that the technology is worth utilizing, Vest said.

David F. Carr oversees InformationWeek's coverage of government and healthcare IT. He previously led coverage of social business and education technologies and continues to contribute in those areas. He is the editor of Social Collaboration for Dummies (Wiley, Oct. 2013) and ... View Full Bio
We welcome your comments on this topic on our social media channels, or [contact us directly] with questions about the site.
Comment  |
Email This  |
Print  |
RSS
More Insights
Webcasts
Enabling a Smooth DX Transformation in the Post-Pandemic New Tomorrow
IT Automation: Scaling to the Future
More Webcasts
White Papers
Securing IT & OT in Industrial Environments
Ransomware Response Report: Trends & Outlook
More White Papers
Reports
State of Endpoint Security: How Enterprises Are Managing Endpoint Security Threats
Global Cloud Proxy Enables VPN Split Tunneling
More Reports

That's so true, Charlie. In addition to holding down costs, it's also better for patients to have fewer tests. Some of them expose us to radioactivity or other potentially harmful things. Plus who on earth wants to pay for things they don't need or get blood taken unnecessarily?!
Reply  |  Post Message  |  Messages List  |  Start a Board

As you say in the story, in many ER cases it's obvious why a patient comes in: a broken bone, for example. I know, though, from speaking to healthcare professionals that every mouse click represents time -- and time is typically the enemy in healthcare, whether it's for the patient's health (as in an ER) or so doctors can see more patients (as in a family practice). Based on what you mention about Dr. Vent's comment re: integration, I'd imagine more integration would definitely increase use because ER staff would see all the necessary info within that one click. Whenever you add another click (and password sign-on), the number of users will decrease exponentially.

Most of us are huge privacy advocates, I'd guess, but when you're in the ER you're already concerned about your health or life and have passed along as much of your info as you know. Integrating HIEs with ERs seems a natural fit, one that doesn't threaten patient privacy.
Reply  |  Post Message  |  Messages List  |  Start a Board

The more conservative decision -- to admit for tests -- is all too often the one made, when doctors don't have enough information. Our litigious society where people go to court to assign blame if things go wrong ensures that this is so. If a doctor can access previous lab test and records of outcomes with a given patient, he or she has a stronger defense that he was making an informed decision, without an admission.
Reply  |  Post Message  |  Messages List  |  Start a Board

There are some scenarios where HIE data can feed directly into the hospital EHR, but often the primary user interface is a separate web portal -- which makes checking whether there is any important info in the HIE repository a separate step. (I didn't get into it in the story, but there are also some HIEs that act as routing agents and don't maintain a central repository).

Given the complexity of clinical data integration, Dr. Vest said there are other levels of integration that would also help such as single sign on.
Reply  |  Post Message  |  Messages List  |  Start a Board

The very small percent of ER doctors who use HIEs was really interesting and I'd like to learn more about why that is. I'd guess some regions have immature HIE implementations. Others haven't done much to market them to physicians. And in other cases some doctors may be unwilling to learn another electronic record. Is there a way to more easily and seamlessly integrate HIE records with multiple vendors' EHR records -- while simultaneously maintaining patient privacy so medical staff don't have unnecessary access to data when they don't need it?
Reply  |  Post Message  |  Messages List  |  Start a Board
Editors' Choice
Hot Topics