With a fresh delay for ICD-10 compliance, US healthcare providers and patients remain trapped in debate. Is higher quality clinical data worth the cost of more detailed data collection?

Progress toward more specific medical data gathering has been halted, once again.

President Obama recently signed the "doc fix" legislation (HR 4302) to delay scheduled cuts to Medicare physician reimbursement rates. The bill also pushes back the ICD-10 compliance date until at least October 2015, further delaying the switch from ICD-9 to ICD-10, which was endorsed by the Forty-third World Health Assembly in May 1990 and released to WHO member states 20 years ago in 1994.

The switch to ICD-10 means that health care providers and insurers will have to replace 14,000 codes with 69,000 codes. These two numbers are often cited by opponents as an undue burden on already busy hospitals and physicians. Terry Gunn, CEO of KershawHealth in South Carolina, said the delay would give hospitals more time to get ready for the "huge, overwhelming task" of ICD-10 implementation. A senior policy adviser to the Medical Group Management Association said that it is "recognition that the industry is simply not ready for the transition."

[Want more on the ramifications of delaying ICD-10? Read ICD-10: Painful To Implement, Painful To Delay.]

On the other side, CMS estimates that a one-year delay could cost between $1 billion and $6.6 billion, according to a blog post by the American Health Information Management Association (AHIMA), which opposes the delay. AHIMA also says that the delay affects some 25,000 of its students who have learned to code only in ICD-10, and that it affects "much more than just coded medical bills, but also quality, population health, and other programs that expected to start using ICD-10 codes in October." CHIME's president criticized Congress, saying, "Further delay of ICD-10 discredits the considerable investment made by stakeholders across the country to modernize health care delivery."

So, where is the truth and what does all of this mean?

With health informatics under pressure to help re-engineer our sick healthcare delivery system, ICD-9 has significant shortcomings. To give but one commonly cited example, ICD-9 does not code for laterality. To see an example of this problem, I suggest you go to the free, public ICD-9 code lookup on the CMS website. Type in "breast malignant neoplasm" and you'll find 15 results that do suggest where in the patient's affected breast the cancer is located but do not tell you which breast is affected. Try the same thing with an ICD-10 lookup, and you'll get 30 results that clearly separate the disease by the affected side.

This isn't the only difference, just an easy example. ICD-10 offers significantly more clinical specificity than its predecessors. Here's an illustration of that from my new text book Contemporary Health Informatics: 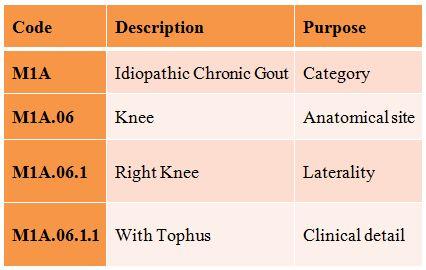 For another example, search on the CMS site for "chronic gout." This search returns two codes indicating whether a tophus -- a deposit of urate crystals that forms over time with poorly controlled chronic gout -- is present. But unlike the ICD-10 code, the ICD-9 code tells us nothing about where it is.

It is not hard to imagine how this added specificity could benefit those interested in the secondary use of health data for research, public health, and other analytic purposes, but where do increases in Medicare costs come from? Estimates of fraud in healthcare vary from 3% to up to 10% of all costs. The Institute of Medicine put that number at $75 billion annually over a decade ago. Among the most common forms of fraud is duplicate billing, charging twice for the same thing. More clinical detail is an obvious benefit for efficiently and systematically investigating this. A gout patient can have more than one tophus, and they can be removed surgically when indicated. Is the removal being done today the same tophus that was removed last year? It's hard to tell if there is no data on where the two tophi were located.

Mark Braunstein is a professor in the College of Computing at Georgia Institute of Technology, where he teaches a graduate seminar and the first MOOC devoted to health informatics. He is the author of Contemporary Health Informatics (AHIMA Press, 2014) as well as Health ... View Full Bio
We welcome your comments on this topic on our social media channels, or [contact us directly] with questions about the site.

I think the skeptics were under-confident that they would have a "well-designed HIT tool" at their disposal as of October 1.
Reply  |  Post Message  |  Messages List  |  Start a Board

Mark, How do you respond to the argument that the version of ICD-10 proposed for use in the U.S. is different (and much expanded) from what's been used in the rest of the world? Many of the ICD-10 skeptics I've talked with argue the U.S. added a lot of additional complexity to make the diagnosis codes work for insurance billing as well as statistical tracking.
Reply  |  Post Message  |  Messages List  |  Start a Board
InformationWeek Is Getting an Upgrade!