Having won a strong following among radiologists who would rather dictate than type diagnostic reports on the images they read, Nuance Communications is branching out with a cloud service aimed at the images themselves.

The Nuance PowerShare Network announced this week is specialized file sharing for radiology images, offered as an extension of the PowerScribe 360 service. Nuance is best known as a vendor of voice recognition technology, including a series of products aimed specifically at healthcare professionals, and PowerScribe 360 extends that capability with online workflow for routing reports to support staff members or back-end service providers who can correct transcripts and get the data from the reports recorded correctly in electronic health records and insurance claims. 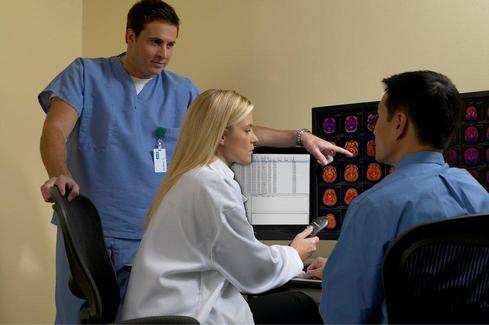 Offering a cloud service for image sharing is not as much of a departure as it might seem, according to Peter Durlach, senior vice president of marketing and strategy at Nuance. "The healthcare division of our company accounted for about $911 million in revenue this year," he says, "and $130 million of that had nothing to do with voice recognition."

The combination of the company's healthcare customer base and expertise in linguistic analysis and machine-learning technologies have allowed it to branch out into other applications related to medical documentation and coding. Nuance is developing a family of software products that understand clinical language and how to translate it into specific codes for medical documentation and insurance claims. A clinical-language-understanding product specific to radiology is coming in the next couple of months, says Durlach.

[Read how one company is using anatomical models to minimize typing: Modernizing Medicine Maps The Body.]

Already many radiologists use PowerScribe 360 in the production of their reports, and with the PowerShare Network the images accompanying those reports can be made available through the same cloud service. Nuance claims to own about 60% of the market -- its customers include 1,600 facilities that produce 60% of the radiology images in the US. Nuance gains an important advantage through PowerScribe, a hybrid cloud service that uses a local server at the healthcare facility to securely and reliably relay radiology reports to the cloud. With the addition of a software plugin, those same

You're right, those files are scary big, and I understand something like a CT scan can consist of many image slices, each one a multi-gig file.
Reply  |  Post Message  |  Messages List  |  Start a Board
InformationWeek Is Getting an Upgrade!