Electronic health record (EHR) developer Cerner, which on Wednesday broke ground on a $4.45 billion campus in Kansas City, expects to double its workforce within the decade.

The company announced in a statement that it is planning to develop a new complex comprising 16 buildings, including 10 office buildings, two data centers, a service center, a training center, a conference facility, onsite daycare, and a health clinic for employees. Cerner, which currently employs about 15,900 people, will add up to 16,000 new jobs, making this the largest economic development in Missouri's history, according to Cerner. It will recruit professionals across tech teams, software management, implementation, and adoption, plus clinical and healthcare.

"We find ourselves at the very important intersection where health and care meet, and the importance of technology and innovation at that intersection is unmatched," Julie Wilson, Cerner's "chief people officer," told InformationWeek.

The EHR market has exploded under federal mandates, and global sales of EHR software are expected to reach $22.3 billion by next year, according to Accenture. Within the United States alone, sales could represent $9.3 billion at 7.3% annual growth. As the market matures, mandate deadlines evolve, and healthcare customers' demands increase, some smaller players have exited the market, prompting talk of vendor consolidation at a time when some providers are considering second- or third-generation EHRs.

Major developers such as Cerner also are evolving beyond simply providing EHRs. In August, Cerner acquired Siemens's health IT business, and it continues to support Siemens's EHR as part of a broader population health strategy. Cerner also inked a 10-year solution provider partnership with Mission Health, creating a template for potential arrangements with other select clients in the future. 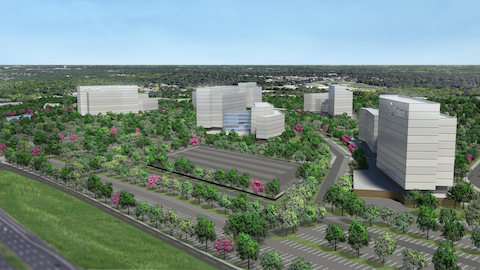 "We are in a very unique position and play a key role in catalyzing and facilitating change across the continuum," Wilson said. "Responding to the ever-changing dynamics within healthcare and technology is energizing for [Cerner]. A good place to look is in our approach to proactively engaging consumers and effectively managing the health of populations."

Since three 20-something entrepreneurs founded Cerner 35 years ago in Kansas City, the company has grown to include six campuses; the newly announced Trails Campus will be its seventh. The company did not consider moving elsewhere, Wilson noted, but recruits locally, nationally, and internationally for these new and existing positions.

"Hiring is an ongoing process, and we hire year-round," Wilson said. "I am very confident that people with science, technology, engineering, and math abilities will be in high demand." To help sate the need for these positions, she added, Cerner partners with local school districts, colleges, and universities, as well as STEM initiatives.

Re: " The company did not consider moving elsewhere, Wilson noted, but recruits locally, nationally, and internationally for these new and existing positions." I am impressed with the projection rate of jobs that they plan to fill, but I am curious to know what percentage will consist of hiring nationally, as opposed to internationally.
Reply  |  Post Message  |  Messages List  |  Start a Board

It's hard NOT to be bullish on health IT these days! It'll be interesting to see how other leading EHR developers' growth plans play out in the coming months and years, too.

From the outside looking in, I agree with Cerner's strategy of signing in-depth systems integrator/solution provider contracts with some key clients. Coming from a background of covering the channel, I've seen just how well these relationships can work for both parties, when done well, and in speaking to both parties a few months ago it appeared they have realistic goals and a strong foundation. Software alone cannot build big profitable growth. Services are crucial, IMHO.
Reply  |  Post Message  |  Messages List  |  Start a Board