With a 3D anatomical model on the iPad, Modernizing Medicine taps the power of touch to simplify electronic health records and medical coding.

Modernizing Medicine wants to put in doctors' hands a digital health record that really is better than paper -- not just for billing or collecting government incentives but also for providing care.

By maximizing the iPad's visual and adaptive user interface, Modernizing Medicine's Electronic Medical Assistant (EMA) software aims to simplify medical coding and speed note taking. Instead having to type in notes and fill in forms, EMA gives users 3D anatomical models to record the diagnosis of a rash, or a tumor, or a broken bone, or a cataract, using pinch-and-zoom gestures to zero in on the affected region of the body and then picking from context-sensitive lists of afflictions and treatments that are personalized to the physician. On the strength of that approach, Modernizing Medicine claims to have captured 20% of the electronic health records (EHR) market for dermatologists and is branching out into plastic surgery, cosmetic surgery, ophthalmology, orthopedics, and otolaryngology.

[Do you have what it takes to support tablets? Read As Doctors Embrace Tablets, Management Headaches Grow.]

Among other things, the anatomical modeling approach means that EMA users had little to fear from ICD-10, the new medical coding scheme that was supposed to become mandatory on Oct. 1, 2014, -- until Congress decided to delay it another year. (Previously, ICD-10 was supposed to go into effect in 2013.) 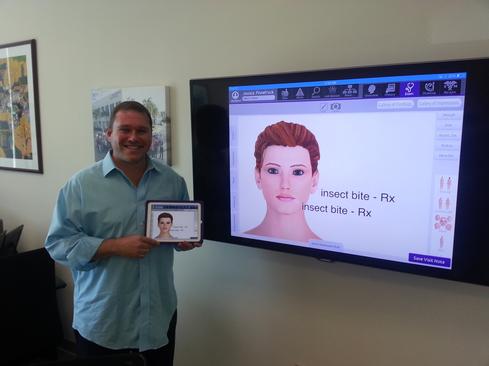 While proponents say ICD-10 is a more precise coding system that will pay off in better data analysis, leading to more efficient and higher quality care, physicians worry its complexity will make it difficult for them to record data correctly and that coding errors could prevent them from getting paid. One source of that complexity is the level of anatomical detail required in medical records -- not just "broken leg" but right leg or left leg, upper leg or lower leg. With EMA software, you touch the affected region of the body on the 3D model, and the software looks up the underlying code. Under ICD-10, a patient visit must also be coded differently for an initial visit or a "subsequent encounter" (follow-up visit), and the software is smart enough to default to subsequent encounter after the first time a given problem is recorded for a patient.

I visited Modernizing Medicine's offices in Boca Raton, Fla., on the day the U.S. Senate was scheduled to vote on the bill including the ICD-10 date change -- a politically unstoppable measure that also prevented Medicare from cutting reimbursement for doctors. So even though the Centers for Medicare and Medicaid services had pledged no further delay to the implementation of the new coding system, CMS wouldn't be getting the last word.

"We were ready, but the industry wasn't," CEO Daniel Cane said. EMA was specifically designed to support ICD-10, although it can continue to generate the less detailed ICD-9 codes that are the current standard for medical billing and data tracking in the US.

Doctors are certainly justified in not wanting to have to memorize even a fraction of the 68,000 codes in ICD-10, but the right way to deal with those codes is to treat them as codes only the computer should have to understand, Cane said. Just as an e-commerce website may need an elaborate system of SKU numbers to track its inventory, but presents a simplified catalog and search function to customers, healthcare software developers need to translate between data tracking codes and concepts that humans can understand.

Under ICD-10, "insect bite" translates into about 120 codes, he said. To demo EMA, he gave a patient bug bites all over her body, plus a chicken bite resulting in a break in the skin (there's an ICD-10 code for that, too) and showed how the software could spit out the corresponding code, all properly sequenced for claims processing.

Joseph J. Zaladonis, Jr., a dermatologist in Bethlehem, Pa., posted a review of the software specifically praising the training he and his staff received and how it helped them secure federal Meaningful Use incentive dollars. "The staff actually prefers charting in EMA compared to paper," he wrote. When I got him on the phone, he said the software wasn't quite good enough to make him love electronic medical records -- he is not crazy about computers in general -- but he appreciates that the software is specific to his specialty and that the company has been responsive to his requests for improvements. The software does accurately code claims based on the data input on the iPad, he confirmed.

He said his staff likes to use it, explaining that during an examination he typically has an assistant recording data on the iPad while he talks to the patient. "I will not pick up the iPad until the conclusion of the visit, to review what the staff put in and fine tune it. Or, if I did a procedure, I'll put in what I did."

Understanding the importance of the user interface was one of the things Cane learned at his previous company, Blackboard, which he co-founded in the late 1990s. Blackboard became one of the leading e-learning and education technology companies. Cane left in 2009 after moving back to Florida, where he had grown up. While he was between ventures, his wife told him he needed to take time to get a thorough physical, which in turn led to a referral for a skin check. That was how he met his co-founder, dermatologist Michael Sherling.

Even though Sherling was in the same practice as the referring internist, Cane noticed the physicians didn't share records electronically, and he decided to give the doctor a hard time about it. "I was like, how could it be this way? Here was this very sharp MD/MBA, and he was telling me there was no technology that wouldn't slow him down or get in the way," Cane said.

Cane took that as a challenge. He envisioned something a doctor could hold in his hands in much the same way as a paper chart, with software that would be driven by touch rather than a keyboard. The earliest prototypes ran on convertible Windows laptop/tablets, but after the April 2010 release of the iPad, a native iOS application became the primary way doctors access

Aside from the use of the iPad and the 3D anatomical model, one of the distinguishing characteristics of Modernizing Medicine's EMA is that it targets specialists, and specialists tend to prefer an EHR that is tailored to their needs over any enterprise system that is more generic.

I pulled a couple of clips from our archives to back this up.

CEO Cane points to a possible compromise, which is having EMA function as the specialist-friendly front end user interface grafted on to an enterprise system like Epic that organizes data at the hospiital / health system level. A somewhat similar hybrid approach for viewing rather than recording charts turned up in this story: UPMC Tablet App Speeds EHR Access.

Modernizing Medicine is probably wise to focus on specialists, rather than competing in a crowded market for general-purpose EHRs, but can you see this visual approach being applied more broadly?
Reply  |  Post Message  |  Messages List  |  Start a Board
Editors' Choice
Hot Topics