NY-Presbyterian CIO Aurelia Boyer says the need for mobile innovation has driven her back into the application development business, but she wants to keep it manageable.

At one time, NewYork-Presbyterian Hospital CIO Aurelia Boyer believed in minimizing in-house software development in favor of a "buy-versus-build" strategy as a matter of conventional wisdom.

But as industries began to standardize on systems such as ERP, CRM, and (in healthcare) EHR software, it became clear to many that customizing standard platforms was preferable to building anything from scratch. Thus, building your own software for anything beyond spackling in the gaps between standard products was clearly foolish -- or so went the argument.

"I think there was a point in time when I probably said such things myself," Boyer mused during an interview about her organization's current push to develop its own mobile software. "I think what we're facing now is different. The most obvious driver of that is that the way consumers use their phones is so different."

Boyer still doesn't believe it makes sense for IT shops to build their own transactional systems. But at least for now, the need for good mobile apps that satisfy the hospital's patients, clinicians, and employees is outrunning the ability of the market to deliver them.

For years, Boyer and her staff have been wrapped up in pushing for full implementation of electronic medical records/electronic health records systems. "Now that we have that, I'm going, 'Ooh -- that's not enough anymore!'" she said. "[Meanwhile] if you look at what healthcare vendors are delivering for the mobile environment, it's pretty primitive -- another version of what we have in the workstation environment." 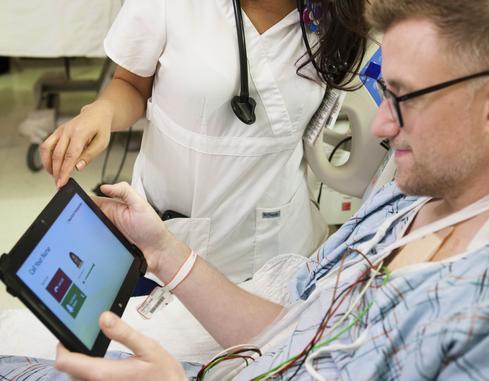 According to Boyer, what are really needed are innovations in workflow that will change the way the hospital does business. While EHR had to be imposed from the top as an enterprise initiative, doctors and other hospital employees are demanding mobile innovation because their experiences as consumers have sparked their imaginations about what might -- and should -- be possible. Similarly, patients want the hospital to be more convenient to do business with, and better at caring for them as individuals.

The healthcare computing environment needs to be "just like my iPhone, where there are lots of little apps I can open up and use for different things," Boyer said. "Our vendors are not going to get there fast enough for us." That's understandable, she acknowledged, given the pressure health IT vendors are under to keep pace with government mandates. "Meaningful use is killing them, and they are dragging along a big old infrastructure." Most important for those transactional vendors are open products with application programming interfaces that make it possible for NewYork-Presbyterian to add its own mobile extensions as necessary.

Having long ago created a patient portal based on Microsoft HealthVault, Boyer is not worried about meeting the minimal threshold for patient engagement required under Meaningful Use. However, she sees an opportunity for a much deeper level of patient engagement that is possible now -- but still challenging.

One of the hospital's first significant mobile software development projects involved the use of tablet computers to replace the traditional nurse call buttons in its surgical units. The tablets gave patients a better way of communicating with the nursing staff, while also providing them with ready access to their own medical records through a patient portal -- and a broader variety of in-room entertainment options to boot. In addition to these benefits, the project paid off financially, costing less than $500,000 for software development, compared to a nurse call system update that could have cost close to $40 million.

New York-Presbyterian's account of the tablet project was one reason we picked the hospital as a winner in last year's InformationWeek Elite 100 awards, and we featured the project in our roundup of 20 great ideas pulled from the awards applications.

Since then, New York-Presbyterian has gotten more ambitious about building a greater variety of apps. For example, a new pain app shows promise as a way for patients to more clearly communicate the level of pain they are experiencing and receive needed pain medication more quickly. The hospital is also working with New York tech incubator BluePrint Health to develop new products.

The health IT industry has done a good job of cooking up useful mobile apps for purposes like looking up reference data such as drug interaction information, but Boyer wants more. "We're thinking about workflow issues in the hospital, ways we can save time or move things along," she noted. "If patients get their pain med faster, that's significant."

When I met with Fleischut a few months ago at the Gartner Symposium conference, the meeting was set up by Kony, a mobile development tools vendor the hospital had just started working with. Kony's role will be to simplify the mechanics of creating and publishing mobile apps, since the tools make it possible to model application behavior and generate the code needed for the software to run on multiple platforms. Kony also promises to help its customers keep pace with the steady advance of mobile platforms, which would be difficult for an enterprise to master on its own.

"We need as much help as possible, as many people as possible to drive more innovation," Fleischut said. "We can't be keeping up with the Apple Watch while dealing with all the iOS versions. It's just going to come too fast."

Boyer hopes the Kony tools will help her organization make faster progress and avoid being boxed into one platform. "I definitely want to be device-agnostic. Apples are great -- I like my iPhone, too -- but I don't want everything to be dependent on one device. At some point, something better is going to come along, and I always want this institution to be able to move."

Originally trained as a nurse, Boyer found her way into IT after consulting and working in hospital administration. Her clinical background helps her keep the ultimate payoff in mind, and makes it easier to talk with doctors and nurses about technology. "I want the nurses and physicians to feel like I've made their life easier," she said. "The electronic medical record hasn't made their life easier."

The EMR has made compliance better and has made some information more organized and easier to find, Boyer noted, but mobile apps hint at the potential to do so much more. "When you think about the complexity they encounter in their day-to-day lives -- I really think we can have an impact on that. I also think we have an opportunity to change the patient experience and make it more modern, so that when patients come into the hospital they don't feel like they've all of a sudden left the modern world."

Mobile OS developers have also put an emphasis on keeping things simple, partly out of necessity (limited resources on the device) but also experience with desktop environments getting too complex too fast.
Reply  |  Post Message  |  Messages List  |  Start a Board

Interesting that a mobile app on a tablet is so much less expensive to update than an independent system. Shows how a few Web standards, a mobile application API and a standard device can drive down costs.
Reply  |  Post Message  |  Messages List  |  Start a Board
InformationWeek Is Getting an Upgrade!