More than half of all prescriptions in the U.S. were routed electronically, according to the 2013 National Progress Report and Safe-Rx Rankings.

Most prescriptions are now submitted electronically, a new study finds.

Last year, 58%, or 1.04 billion of all eligible prescriptions in the US, were routed electronically through Surescripts' health information network -- a 32% increase in volume from 788 million in 2012, according to the 2013 National Progress Report and Safe-Rx Rankings. They came from 73% of office-based physicians, Surescripts found. Last year, 69% of these doctors used this technology, the report said.

Widespread adoption of electronic health records is driving this use, David Yakimischak, executive vice president and general manager of Medication Network Services at Surescripts, said in an interview. In 2013, 78% of office-based physicians used an EHR, according to the Centers for Disease Control and Prevention.

E-prescribing "is relatively easy and adds value quickly. After a practice has moved to electronic health records, they start to look at where they can connect and exchange clinical information, and e-prescribing is the obvious first choice," Yakimischak said. "There is no doubt that Meaningful Use and, before that, the Medicare incentives helped drive both adoption and use of e-prescribing over the past several years. The other factor at play here is that physicians are getting more and more comfortable with it. "

Importantly, 95% of all pharmacies accepted e-prescriptions in 2013: Almost all (98%) of chain pharmacies and 88% of independent chemists adopted this technology last year, Surescripts found. 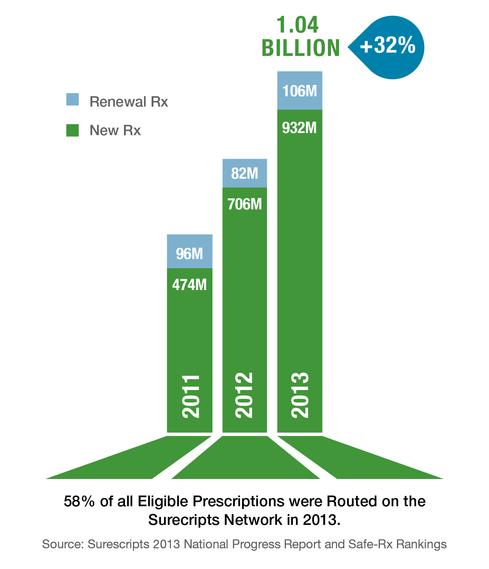 Small practitioners are most likely to e-prescribe. According to the report, 73% of offices with two to five physicians use this technology, up 12% from the 64% who used it in the prior year. Likewise, 73% those practices with six to 10 doctors on staff e-prescribed in 2013, versus 11% in 2012.

Larger facilities with more support staffs appear to lag. Only about one-third of providers with 100 or more physicians use e-prescribing, an uptick of 12% from the previous 12 months, and 42% of centers with 26 to 100 doctors e-prescribed in 2013 versus 37% in 2012. Those numbers are deceiving though, said Yakimischak.

"I would like to point out that large practices and hospitals are adopting as well, it’s just that out of say 1,000 [electronic medical records] users in a hospital, maybe only 40% actually e-prescribe, which makes their numbers look like they are adopting more slowly when in fact it has to do with their percentage of penetration within any one installation," he said. "The growth across all practice sizes has been double digit and fairly consistent over the past several years. "

EHRs are not the only factor fueling growth. Four years ago, the ban on e-prescribing of controlled substances (EPCS) was lifted. To do this, the EHR's prescribing mode must meet all the Drug Enforcement Agency's interim final rule (IFR) and meet individual state standards. New York, for example, requires e-prescriptions must be encrypted while transmitted, according to US Pharmacist. The ability to e-prescribe across all medications streamlines the process for physicians, proponents say.

In addition, prescribers gain insight into drug interactions, allergies, and other information on patients' ability to tolerate prescribed medications.

"At a time when there is question and debate of the value of health IT, e-prescribing is real-world evidence that it can be done, at scale, and achieve positive outcomes for all involved," Yakimischak said. "Cost has been reduced and quality has been improved."

Alison Diana is an experienced technology, business and broadband editor and reporter. She has covered topics from artificial intelligence and smart homes to satellites and fiber optic cable, diversity and bullying in the workplace to measuring ROI and customer experience. An ... View Full Bio
We welcome your comments on this topic on our social media channels, or [contact us directly] with questions about the site.
Comment  |
Email This  |
Print  |
RSS
More Insights
Webcasts
Bolstering Your Enterprise Cyber Risk Assessment
Disaster Recovery/Business Continuity in the New Normal
More Webcasts
White Papers
A Practical Guide to Enabling 5G Deployments
Best Practices Guide to Containers/ Kubernetes Security
More White Papers
Reports
Cortex XDR Rides the Forrester Wave as a Leader
The Infoblox Q4 2020 Cyberthreat Intelligence Report
More Reports

@Alison Good points about calling in. My doctors have yet to offer me the option of electronic uploads, though. As for the wait, the only time that might be mandated is if they want to first verify the insurance with the customer present. But no matter what -- even when they have that info on file -- CVS seems to keep everyone waiting 20 minutes for prescriptions.
Reply  |  Post Message  |  Messages List  |  Start a Board

When a doctor's office calls in prescriptions, there are a couple of problems: For one, it takes away time the nurse or office manager could spend doing something else. For another, the likelihood of error increases. Some of these medications sound very similar and it's really easy to mistake one drug or dosage for another. Similarly, faxing over a prescription can generate mistakes or time delays since faxes can fall to the floor or handwritten scripts, especially when faxed, are easily misread.

With e-prescriptions, the doctor, nurse, or manager, simply pushes a button on the computer screen from the EHR, usually, and sends the typewritten script to the pharmacy of the patient's choice. The fact that you're still waiting is more about your pharmacy's policy than the system! Some pharmacies don't fill a script until the patient shows up. I steer clear of that kind of pharmacy, personally!
Reply  |  Post Message  |  Messages List  |  Start a Board

Interesting, my doctors still write out prescriptions and offer to call them in to the drugstore. Calling it in is supposed to save time, but somehow the pharmacy still always manages to keep me waiting 20 minutes or more for the prescription to be ready.
Reply  |  Post Message  |  Messages List  |  Start a Board
InformationWeek Is Getting an Upgrade!