A hospital and an independent physician's organization use apps along with EHRs to improve ACO operations.

Electronic health record (EHR) systems are often promoted as the key to better coordination of patient care, but when achieving or failing to achieve better coordination has real financial consequences, healthcare organizations often find they need something more.

Consider two very different examples: Key Physicians, a network of primary care physicians in Wake County, N.C., and St. Vincent Medical Group, part of Ascension Health, one of the largest faith-based hospital systems in the nation. Both are seeking to perform well as part of accountable care organizations and other forms of value-based care that seek to reward prevention and efficiency, rather than the volume of patient visits or procedures performed. Both are also working within the Patient Centered Medical Home model for revitalizing primary care and improving care coordination. Both turned to relatively unknown software startups to fill the gaps in their online systems.

For Key Physicians, EHRs are not the answer to better care coordination, because the physicians in its network have chosen 13 different EHR systems. Although the same regulators that have promoted EHR are also encouraging the development of Health Information Exchange (HIE) networks and technologies, the physician group didn't have access to either a robust public HIE network or the funds to implement its own HIE middleware.

"Ideally, we would all be on HIE and everything would be connected with bidirectional interfaces," says Ray Coppedge, executive director at Key Physicians. "Someday, who knows, we may get there. But we need to do something different for now." Key Physicians became the first customer for Intelligent Care Coordinator, a web-based system for exchanging referrals developed by Infina Connect, a startup just starting to commercialize its cloud software for broader availability.

Ascension Health is in the process of deploying Athenahealth's EHR, although within the St. Vincent system about half of the doctors are still transitioning off EHR software from Allscripts. By this summer, all of them should be on the AthenaClinicals, a shiny new EHR in the cloud. Yet Dr. Bruce Bethancourt, chief medical officer of St. Vincent Medical Group, is not convinced any EHR today provides the information and the workflow for the new model of care. EHR software "collects a lot more data on our patients" and pushes physicians to document more but "doesn't necessarily provide the information we need to do the right thing for the patient at the point of care." In particular, he is looking for better ways to identify gaps in care, such as the need to follow up with a patient who is due for a mammography but it hasn't been ordered, or to recommend changes to the treatment of a diabetic being given a less than optimal treatment for his or her condition. 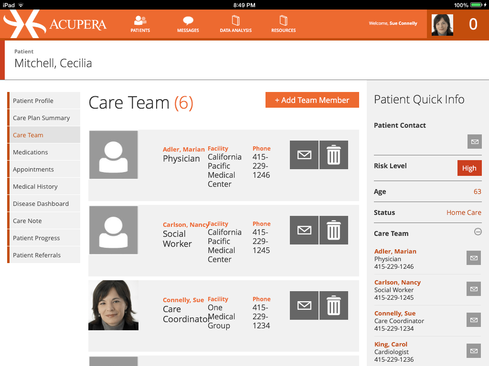 St. Vincent is piloting a suite of cloud software services from Acupera specifically designed for population health management -- proactively managing the health of patients, particularly populations or classifications of patients with specific health risks, such as diabetics.

So far, St. Vincent considers the use of Acupera just a test of something it might try to operationalize in 2015, if the right results materialize. "If we can show success with the proof of concept, it's going to be much easier for us to make a business for case return on investment," Bethancourt tells us. With its foothold at Ascension Health for EHR software, Athenahealth could also make a bid for its AthenaCoordinator software to play a similar role.

In addition to experimenting with Acupera, St. Vincent taps actuarial software from Milliman for predictive modeling of factors relevant to a value-based care business model, such as the risk of readmission to the hospital for specific patients, says Bethancourt.

Although the Key Physicians and St. Vincent's examples are different, they both show the tradeoffs organizations are making to achieve practical results.

The web-based referrals Key Physicians doctors exchange do not feature any sophisticated integration with the EHRs at each practice. They could legitimately be criticized as another online system that's really little more sophisticated than the exchange of data via fax. Yet Coppedge says the system imposes some structure on the process, with forms that include required fields and data presented to the recipient in a common format. One of the most common complaints physicians have is that they don't receive enough information from a colleague sending them a referral, he tells us. According to one study, he says, physicians reported the information they got to accompany a referral was only adequate about a third of the time, and referring physicians said they only got back data on the results about two thirds of the time -- often it didn't come back until after the patient's follow-up visit with a primary care physician.

With this system, specialists are able to specify the most relevant data they need to receive about a new patient, says Coppedge. "It can be as simple as, 'Tell me very specifically what the issue is here and what you are expecting me to do on your behalf with this patient.' "

Yes, some physicians in the network saw the lack of an automated interface with their EHR as a negative, he concedes, but more sophisticated integration "takes a lot of money, takes a lot of time, and we didn't have a lot of either."

Infina CEO Mark Hefner says adding the ability to exchange data in a semi-standardized HIE format, the Continuity of Care Document XML format, would be a next logical step, but "there hasn't been, as of today, a business need." Meanwhile, the value of the system lies in keeping things from falling through the cracks. "If I sent a referral, I can see if you've accepted it, and I can see if you've scheduled it. Doctors are finding that very, very powerful."

St. Vincent's Bethancourt says it may be that the care coordination functions he is looking for from Acupera ultimately should be part of the EHR or an associated software suite. "I think we all thought that when the electronic medical record was mature, it would have all these functions." Then again, new requirements keep emerging as the healthcare industry changes, and features like predictive modeling wouldn't necessarily have been on his wish list a few years ago.

Using separate software for care coordination, rather than something integrated with the EHR, does mean that doctors and nurses who spend most of their time online logging data into the EHR are less likely to switch to a separate screen or browser tab to consult the information in Acupera. For the moment, Bethancourt thinks the right way to address that is with a division of labor, since there simply aren't enough hours in the day for doctors to address all the demands being placed on them: Instead, medical assistants and care coordinators are responsible for identifying gaps in care and handling the follow-up with patients, and "nurse navigators" monitor high-risk patients and try to intervene before a crisis can occur.

"The doctors don't have to focus on that, because we're going to take care of that for them," says Bethancourt.

Acupera CEO Ron Razmi, who was a cardiologist before becoming a software entrepreneur, tells us analytics are often emphasized as the most important technology for population health management, but he believes modeling the workflow for addressing the identified patient needs is at least equally important.

"Population health is a black box right now," and even the top academic medical centers "don't know where to start with population health," Razmi says. "The biggest mistake a lot of them make is to think they have to do everything right off the bat, and that leads to paralysis. The best thing we can do is break it down for them in terms of what steps they can take immediately without turning everything upside down in their organizations."

David F. Carr oversees InformationWeek's coverage of government and healthcare IT. He previously led coverage of social business and education technologies and continues to contribute in those areas. He is the editor of Social Collaboration for Dummies (Wiley, Oct. 2013) and ... View Full Bio
We welcome your comments on this topic on our social media channels, or [contact us directly] with questions about the site.
Comment  |
Email This  |
Print  |
RSS
More Insights
Webcasts
Bolstering Your Enterprise Cyber Risk Assessment
Disaster Recovery/Business Continuity in the New Normal
More Webcasts
White Papers
The State of Zero Trust Security Strategies
Zero Trust Guiding Principles
More White Papers
Reports
The State of Malware Threats
Why You're Wrong About Operationalizing AI
More Reports