50%
Tweet
Long-percolating trends will come to a head with implementation of the Affordable Care Act and the rise of private exchanges, says PwC report.

Trends that have been threatening to reshape the healthcare industry for a long time will crest in 2014, driven by economic forces and the demands of both regulators and employers, according to a forecast from PwC, the US business of PricewaterhouseCoopers.

In its annual report on the Top Health Industry Issues for 2014, released Wednesday, PwC particularly focuses on the impact of the Affordable Care Act. That's not just because Obamacare is in the news, but because "it's the backdrop for so many other trends," said Ceci Connolly, managing director of the Health Research Institute at PwC. Despite continuing political drama in Washington, healthcare industry participants and employers seeking healthcare coverage for their employees have accepted that it's here to stay and are adjusting their plans accordingly.

At the same time that the ACA is driving the uninsured to seek coverage through exchanges operated by the state and federal governments, many employers are looking more seriously at having their employees choose from a menu of plans offered through a marketplace -- giving individuals more control over what level of coverage they want to obtain and what they are willing to spend to get it. This can also be a first step toward employers shifting from "defined benefits" to a "defined contribution" model of sponsoring health insurance -- attractive because "it gives employers budget certainty," Connolly said.

Many employers have been trying out private exchanges on their retirees, but they are increasingly looking at bringing them to their active employees as well, Connolly said. Walgreens is one early public example. Although Obamacare doesn't specifically promote the use of insurance exchanges by employers, its implementation seems to have prompted them to look at insurance marketplaces more seriously. "There has been a lot of attention to the exchanges created by the ACA, and as a result there has been similar attention given to the private exchanges," she said.

[Read our complete coverage of the HealthCare.gov launch here.]

Many of the changes driven by government programs like Medicare and Obamacare, as well as by employers and by insurers, are conspiring to make consumers more cost conscious of what they are spending on both healthcare and health insurance. The trend toward consumer-driven healthcare has been building for years and helps explain the rise of high-deductible plans, health savings accounts, and other industry innovations. However, one flaw in this approach is consumers tend to have too little knowledge of the real cost of care -- particularly hospital care -- to make good decisions. PwC sees this as one of the things that is starting to change. 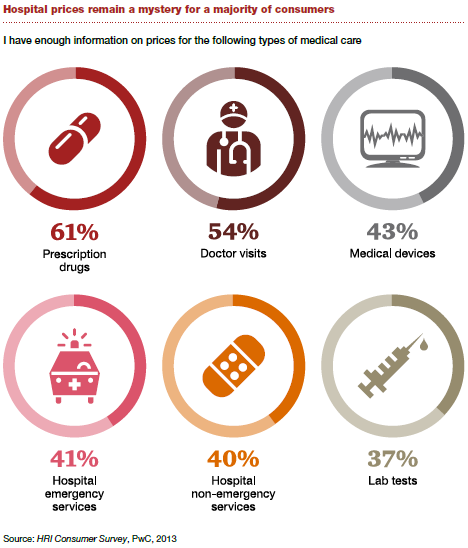 "What has historically been a piecemeal effort is coming together," the report said. Regulators and employers are insisting hospitals disclose their pricing more openly, and new services are cropping up to help patients understand their hospital bills. Venture capital is also flowing toward products and services that enable "price transparency," and business processes are changing to allow it.

Meanwhile, healthcare organizations are shifting from merely gathering data in electronic health records to using the data to improve the health of their patients, with mobile and social tools offering a path to patient engagement. For example, Welldoc has demonstrated that for patients who use its BlueStar diabetes management app, it is able "to lower blood sugar and lower the cost of treating those particular diabetics," she said.

Although PwC identified these trends independently, Connolly said that once the report was written she began to see how they all dovetail. "The rise of the exchanges leads to consumers spending more of their own money, and that takes you into these other topics," she said. "It means they'd like better pricing information -- and oh, by the way, they'd like to have it on their mobile app."

The PwC researchers identified several other trends influencing the development of drugs and other parts of the industry, but the overarching trend is one of disruption, Connolly said. The roles of many players in the industry are changing, while new entrants are also stirring things up, she said. Insurance companies are getting more involved in delivering care, and some care providers are getting into the insurance business -- in both cases, trying to get more control over the economics of the whole value chain. Examples include EmblemHealth, one of New York's largest insurers, forming its own network of practices, while Sacramento, Calif.-based Sutter Health became an HMO in 2013 to better compete with Kaiser Permanente.

Meanwhile, retailers like CVS are becoming healthcare providers, operating their own clinics for access to low-cost care.

David F. Carr is the editor of InformationWeek Healthcare and a contributor on social business, as well as the author of Social Collaboration For Dummies. Follow him on Twitter @davidfcarr or Google+.

We welcome your comments on this topic on our social media channels, or [contact us directly] with questions about the site.
Comment  |
Email This  |
Print  |
RSS
More Insights
Webcasts
Protecting Mobile Apps and APIs from the Inside Out
Enabling a Smooth DX Transformation in the Post-Pandemic New Tomorrow
More Webcasts
White Papers
Getting The Right Cloud Management
Attack Surface Visibility: The Foundation of Effective Cybersecurity
More White Papers
Reports
The New Face of IT Automation
Annual Threat Intelligence Report: Perspectives and Predictions
More Reports

The exchanges will mean that freelancers like me will be able to buy insurance for the same price that an employer with multiple employees can. Yes, freelancers will still forgo that "defined contribution," but we won't have to pay more than twice as much as does a medium sized organization per head. And, think of how much time a business owner with a dozen employees currently has to waste on this. Now, all that wasted effort can be concentrated on providing better products and services.

The comparison I've heard to the airline industry is that healthcare providers need to get patients to do a lot of the work they now do -- copying how we airline passengers now look up and book our own flights online without a person involved, and check in ourselves. Some things (like carrying our own bags) are a hassle, but others like online booking are a feature. Most of us would welcome the chance to go online and book our own doctor appointment time, rather than calling.
Reply  |  Post Message  |  Messages List  |  Start a Board

The point about pricing transparency in the PwC report is debatable.  As you note: "The trend toward consumer-driven healthcare has been building for years... However, one flaw in this approach is consumers tend to have too little knowledge of the real cost of care -- particularly hospital care -- to make good decisions. PwC sees this as one of the things that is starting to change."

But one wonders how soon.  Even as data becomes more available to compare the price of treatments by various providers and hospitals, history has shown that when transparency exposes the price of goods and services, providers find other ways to extract additional fees and payments.

Just look at what happened in the airline industry as data harvesting services made it easy to compare the price of airline tickets.  Guess how much airlines netted last year on things like baggage fees; head-of-the-line boarding rights; and other ancillary revenue programs? $27.1 billion according to a Review of Ancillary Revenue Results for 2012.

Consumers need better information, no question.  But one imagines consumers will still be face a mountain of confusion as more of that information becomes available.

Do the changes happening now really feel like they're happening at a faster rate? Every 2014 tech tech and market forecast proclaims big changes, often exaggerated, but is healthcare different?