Apple is expanding its partnerships with leading healthcare providers, electronic health record developers, and app developers to forge a strong foundation for its upcoming HealthKit software, expected as part of Apple's iPhone 6 and iOS 8 release next month.

Apple, one of several large technology companies targeting healthcare, is teaming up with health systems such as Mount Sinai, Johns Hopkins, and the Cleveland Clinic, as well as the EHR developer Allscripts, Reuters reported. These potential relationships expand on Apple's partnerships with Epic, Nike, and the Mayo Clinic, disclosed in June during Apple's Worldwide Developers Conference. In July, Apple and IBM unveiled details of an agreement to develop healthcare apps for mobile users, according to Dan Pelino, general manager of IBM's public sector business, which includes healthcare. That partnership also could help both companies' separate pacts with Epic; IBM, an Epic integrator, will help Apple link the Epic MyChart patient portal with Apple HealthKit, Pelino told InformationWeek last month.

"Apple has been very secretive about what HealthKit might include and how it will integrate with different systems that are currently in place. All of the major players in this yet unnamed arena are still attempting to figure out the direction to take," Spencer Gibson, IT administrator, coordinator, and salesforce administrator at Innovative Consulting Group, told InformationWeek. "Allscripts will greatly benefit from having the Apple name tied to their software. EHR providers will be excited to work with Apple and have reportedly been knocking at their door to be partners. They recognize that the Apple name is highly trusted among their customers, and being seen as the high-end healthcare system is a great marketing position. Apple has historically been known to court major corporations very well, and we can expect them to continue this focus."

Apple expects HealthKit to address the integration issues plaguing some healthcare organizations. Soon, for example, "dozens of major health systems" will be able to integrate HealthKit data with Epic EHRs, Reuters said. Kaiser Permanente is testing several apps that leverage HealthKit, and it plans to approach Apple about a formalized relationship, sources told Reuters. Cleveland Clinic is testing a service that helps patients schedule doctor visits if an app detects a health concern, the article said. 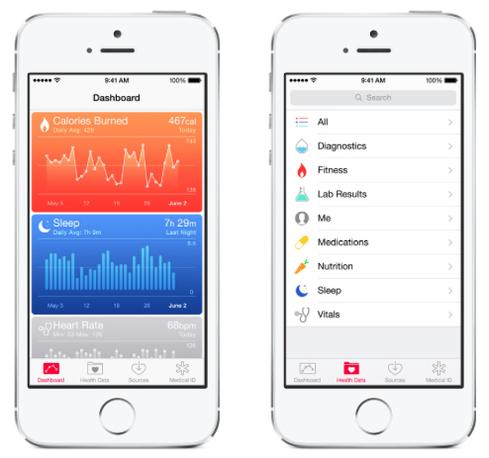 "The core issue here for Apple, Google, Microsoft, and others lies in the ability to share information automatically," said Michael Starnes, president of Starnes Consulting in Orlando, Fla. "This is a huge topic; it's not a new problem, just new players."

There are more than 100,000 healthcare apps on the market today, said Ralf-Gordon Jahns, founder of Research2Guidance. The mobile healthcare app market will reach $26 billion by 2017, but solutions like HealthKit could help providers improve service, reduce costs, and enhance efficiency.

"A main focus of these apps is providing information about a person's health and wellness for review. We've already seen customers become very excited about the availability of this data, but without putting that data in front of trained professionals, it can be very hard to make sense of it all," said Gibson. "A doctor has a much greater ability to educate consumers on what trends might mean and what to be on the lookout for in future trends. In addition, the ability to communicate with medical professionals from mobile devices without a trip to a doctor's office has the ability to make patient care much more proactive, saving patient lives while lowering the cost of providing care. Many doctors feel that their bandwidth is maxed already and will jump at the opportunity to cut down on in-house visits while making patients more connected."

By putting HealthKit at the center of patient records, Apple might find itself wading in HIPAA waters. If HealthKit stores patients' information, for example, iPads, iPhones, and the much-anticipated iWatch must become HIPAA compliant, experts said. Apple is in discussions with the Food and Drug Administration (FDA) regarding any HealthKit regulatory requirements, TechCrunch reported.

Apple, of course, is not alone in its desire to become the linchpin between consumers and providers. Google, Samsung, and Philips, among others, have invested in this space, and more players likely will enter the market.