A 451 Research survey finds early Apple watch adopters are exceedingly satisfied with the smartwatch. Many are also using it for health and fitness.

Apple is known for the high level of customer satisfaction that accompanies its products, and the highly publicized Apple Watch is no exception.

A Sept. 15 report from 451 Research of 145 Watch owners finds an impressive 87% satisfaction rate. The firm conducted its research between July 27 and Aug. 4.

More than half (54%) of owners said they're "very satisfied" and a third said they are "somewhat satisfied" with the smartwatch, which began shipping in April after years of speculation and rumors.

The vast majority of Watch owners (85%) said they wear the device every single day, and 79% say they use it daily to monitor health and fitness routines.

The ability to send and receive notifications is the number one feature Apple Watch owners report that they liked best about their device. This is followed by health and fitness monitoring, with aesthetics and design rounding out the top three.

Unsurprisingly, battery life led the list of dislikes -- cited by 37% of survey respondents. This was followed by the Watch's reliance on the iPhone. 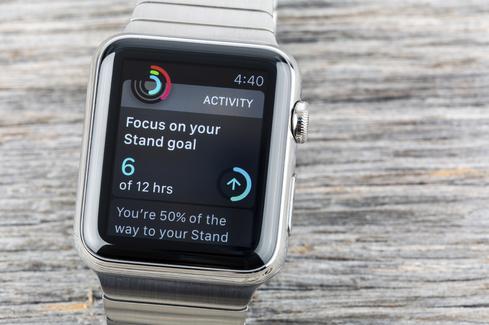 The lack of waterproofing was also a significant gripe, mentioned by a quarter of Watch owners, with the lack of applications and the learning curve required to operate the device rounding out the top five consumer complaints.

The survey results also indicated that the high level of satisfaction would lead to positive world-of-mouth advertising for the Watch. Of those surveyed, 55% said they would very much recommend their new device to a friend or colleague, and 28% say they were somewhat likely to make the recommendation.

"Apple Watch is off to a great start, with high marks in satisfaction and a strong likelihood of recommending it to others," Andy Golub, survey research director for 451 Research, said in a statement. "The wide range of features on the device and its frequent usage among owners pose a clear threat to health and fitness monitors and traditional watches."

In addition to replacing their regular watch, the Apple Watch has also filled another technological gap in consumers' lives: Nearly half of all Watch owners said they had previously planned on buying a health and fitness monitor but have put that purchase on hold or canceled it altogether now that they have Apple's device.

[Read more about how the Apple Watch is selling.]

The Watch has quickly become the bestselling wearable device with the shipment of 4.2 million smartwatches in the second quarter of 2015, according to a July report from analyst firm Canalys.

Wearable device shipments are expected to reach 76.1 million units in 2015, with worldwide shipments projected to hit nearly 175 million units by 2019, according to a Sept. 14 report by IDC.

The company expects watchOS, which Apple recently announced an update for, to quickly establish itself as the overall leader in the smart wristwear market and maintain its position throughout the forecast, climbing to 40.3 million units shipped by 2019 and capturing just under half of marketshare.

Nathan Eddy is a freelance writer for InformationWeek. He has written for Popular Mechanics, Sales & Marketing Management Magazine, FierceMarkets, and CRN, among others. In 2012 he made his first documentary film, The Absent Column. He currently lives in Berlin. View Full Bio
We welcome your comments on this topic on our social media channels, or [contact us directly] with questions about the site.
Comment  |
Email This  |
Print  |
RSS
More Insights
Webcasts
Bolstering Your Enterprise Cyber Risk Assessment
4 Practical Tips for Building a Data Lake
More Webcasts
White Papers
Three Secrets to Stopping Ransomware Cold
VPN Risk Report
More White Papers
Reports
Why You're Wrong About Operationalizing AI
Protection Strategies for a Cyber-Resilient Organization
More Reports