Sensor-equipped mouthpiece can detect worrisome hits to the head.

Just a few weeks ago, the NFL released a report estimating that one in three of its players will suffer long-term brain damage from the effects of multiple concussions incurred during their careers. Parents across the US are questioning whether they should let their sons play the game, both because of the long-term risks and because of the potential for serious, even fatal, head injuries.

Fans have become so aware of the issue that University of Michigan head coach Brady Hoke received a hail of criticism for allowing starting quarterback Shane Morris to return to the field after a violent hit clearly left him dazed and stumbling.

Now a company in Kirkland, Wash., is pioneering a new technology that aims to accurately track the force of collisions, hits to the head, and knockdowns, all in near-real-time. i1 Biometrics has introduced a mouthguard equipped with sensors and wireless technology that measures the force, direction, and location of head impacts and transmits the data to handsets on the sidelines.

[Not ready for the Apple Watch? Read The Ultimate Wearable? It's 'Invisible'.]

"We're not the first sensor company to enter the space," said Jesse Harper, CEO of i1. "One of our main differences is accuracy." Because the mouthguard is in contact with the skull, "everywhere your upper jaw goes, the mouthpiece goes."

By comparison, he said, sensors attached to helmets measure the impact to the helmet, not the head.

Another distinction is the use of wireless communications to send data to coaches on the sidelines. Many helmet sensors work with a series of blinking lights, which are hard to interpret and potentially distracting during play. 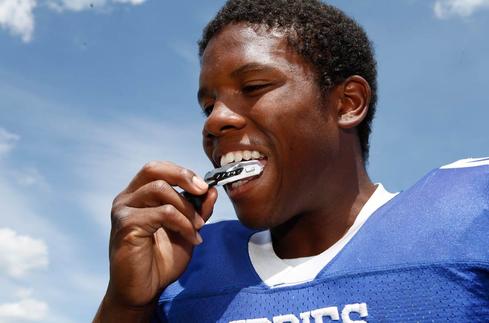 The mouthpiece turns on only when sensors detect that it's in place, and it turns itself off when the player takes it out, whether between plays, on the sidelines, or at halftime. Because of the "teledensity" of football stadiums, with thousands of fans, all with their own mobile devices, SMS or Bluetooth technology couldn't work, Harper said. Instead, the mouthpiece uses a proprietary radio signal. If the signal is interrupted, the mouthpiece stores data while it searches for the handset; when the signal is restored, the mouthpiece burst transmits all the data gathered during the interruption.

In addition, the data gathered for each player is stored both in a medical database and in the cloud, Harper said, and it follows the player, allowing coaches and medical staff to track up to a thousand accumulated hits. The data will show "a heat map of the head" detailing where each hit occurred.

And even though questions of safety might be dominating the headlines at the moment, Harper said the mouthguard also can serve as a performance measurement and training tool, which is a much greater motivator for coaches and players.

The study of concussions -- how many head impacts and with what force and frequency -- is still fairly new, and Harper said teams will need to have the infrastructure in place to analyze the data and understand what they see.

"Today, if your child has a 100-degree fever, you know what that means, but a hundred years ago you didn't," he said. "That's where we are, trying to establish context."

Right now i1 is aiming for the high school and college football, lacrosse, and ice hockey markets. "There is a slight protrusion [on the mouthpiece] -- that's what lends itself to helmeted sports," Harper said. As the technology improves and gets smaller, he believes that soccer will follow.

Harper, who has a background in wearable sports technology, said that wearables such as the mouthpiece need to be seamless to the user if they are going to expand beyond niche markets.

The mouthpiece is a familiar piece of equipment for players, Harper said. "It's just instead of choice A, use choice B."