Doctors Learn To Give Up Faxes - InformationWeek

Here's how one accountable care organization improved patient follow-up rates by saying goodbye to faxing and hello to a smartphone app for doctors.

The hospitals needed to ensure doctors' offices scheduled post-release visits within the government-mandated 14 days. And practices needed to determine the types of services patients required, from home health nurses to residential care. But the ACO realized that its old-school method of communication needed to change.

Faxes easily get lost, misdirected, or unread, noted Tom Samuels, CFO and CIO of Quality Independent Physicians, in an interview. As an ACO whose reimbursements are directly tied to savings and quality of care, Samuels knew the group had to improve communications between hospitals and its independent doctors across Louisville and Lexington, Ky., and Southern Indiana.

"The doctor may or may not be able to see that fax for two or three days and may not know about that patient's discharge until after the fact," he told us. "We were looking for a very simple solution to meet that communication need."

QIP physicians run their own practices, employing different electronic health records (EHRs) or in some cases still relying on paper files, says Samuels. Although QIP operates a CareEvolution health information exchange (HIE), that system was too complex for some users, and QIP was unable to track who had read or not read messages, he says. Hospitals sent information to both QIP's HIE and doctors' individual offices, but it is up to the physicians' offices to plan each patient's post-release care.

Samuels investigated HIPAA-certified secure messaging options, many of which were sophisticated programs sure to intimidate tech-shy physicians. He wanted simplicity and ease-of-use. Like most physicians, QIP's medical professionals typically use a mix of iPhones and Androids to communicate in their personal lives. Samuels wanted something doctors could use on their own devices that met HIPAA security requirements. Unlike a desktop browser-based system, a mobile app gave physicians the mobility they demanded; texting provided the ease-of-use Samuels believed would encourage doctors to use the app.

He found that Red e App, a mobile app for private communications, met most of his requirements, including HIPAA security. Other apps he reviewed were too complex for his organization. 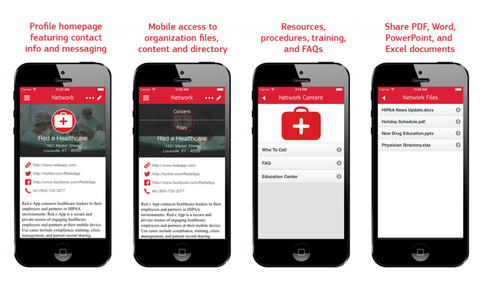 To equip doctors with the app, a member of the QIP IT staff used a regular visit to QIP member offices as an opportunity to download it to the iPhones and Android smartphones of each physician, nurse, and office manager. During the same visit, the IT person trained users on how to add contacts and use the app.

Although it's premature to determine financial ROI, after just three months of using the app QPI is seeing early benefits that could bolster its bottom line. Communication is getting better, says Samuels.

"Our quality standards from last year to this year have improved. We're keeping high-risk patients in front of office managers and doctors. The percentage of patients followed up within 14 days has increased every month since Red e App."

QPI will know by the middle of May whether the app has decreased the number of patients readmitted to the hospital, he added. "The readmission hits us in two ways. It's a measure of quality CMS is measuring us on. Additionally, every time a patient is readmitted you're talking big dollars."

To encourage more doctors to use Red e App, QIP asked the developer to provide more-granular controls so it can measure the number of texts each doctor reads. To increase the response rate among the doctors who read fewer texts than others, Samuels is considering gamification, a ranking system, or other rating to spur doctors' competitive spirit, he said.

Or, if May readmission rates are lower, the opportunity to continue improving care and profitability might be reward enough.

Alison Diana is an experienced technology, business and broadband editor and reporter. She has covered topics from artificial intelligence and smart homes to satellites and fiber optic cable, diversity and bullying in the workplace to measuring ROI and customer experience. An ... View Full Bio
We welcome your comments on this topic on our social media channels, or [contact us directly] with questions about the site.
Comment  |
Email This  |
Print  |
RSS
More Insights
Webcasts
Disaster Recovery/Business Continuity in the New Normal
4 Practical Tips for Building a Data Lake
More Webcasts
White Papers
Future Proofing Your Network for 5G
AWS Lambda Security Best Practices
More White Papers
Reports
2021 Email Threat Report
Intelligent Outcomes Are Key to Business Resilience
More Reports

It's incredible, isn't it, especially when the doctors are all part of the same vast healthcare organization -- and you still have to complete the same paperwork! It's even more frustrating when you know they'll then take that info and type it into a computer, which already has the data somewhere (probably billing). Add to that the fact that there are plenty of tablet-based software apps already on the market to eliminate alll this paperwork and it gets super frustrating! My ongoing pet peeve is having to write my insurance information on the paper, then seeing the receptionist copy/scan the card into my e-file... Sigh.
Reply  |  Post Message  |  Messages List  |  Start a Board

No, some practices continue to rely on faxes as the physicians don't want to use the text-based system. However, the CIO hopes that improved efficiency and accuracy translate into improved payments which, as an ACO, means more money for all participants. Perhaps that, coupled with his gameification plan that appeals to doctors' competitive nature, will do the job of reaching 100%.
Reply  |  Post Message  |  Messages List  |  Start a Board

Has this organization really eliminated faxes? Probably not 100%, but the vast majority?
Reply  |  Post Message  |  Messages List  |  Start a Board
InformationWeek Is Getting an Upgrade!