When surgeon Brent Ponce wore Google Glass during a shoulder replacement, the ghostly hand of a remote collaborator coached him along.

Brent Ponce wasn't the first surgeon to bring Google Glass into the operating room, but he may have been the first to use it as a truly collaborative tool.

While performing a complete shoulder replacement at the University of Alabama at Birmingham Highlands Hospital, Ponce wore the Glass display under a moonsuit-style surgical hood, allowing the camera built into the frame to capture video and beam it to a colleague, Phani Dantuluri, M.D., tuning in from his office in Atlanta. At the same time, on the Glass' tiny video screen, Ponce could see a virtual hand pointing things out. It was Dantuluri's hand, captured by video on the other end of the Internet connection and superimposed over the surgical field of view. 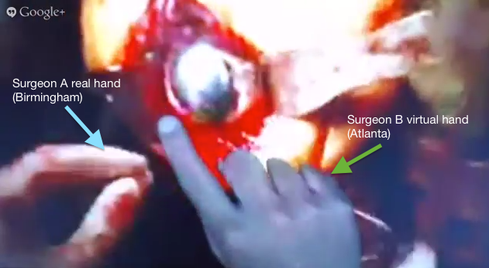 This was accomplished with the use of a Glass app from VIPAAR, which makes software for remote assistance via video. It's technology that got its start in healthcare, although it's also used for other purposes such as field-servicing equipment. The software works on PCs as well as mobile devices, and now on Google Glass, using a camera to capture hand movements and superimpose them on video from a remote location.

Ponce had used VIPAAR's technology before, in combination with conventional cameras and monitors, as part of a medical education demonstration project with the Veterans Administration. In that case, he was the one coaching surgical residents performing a procedure, monitoring it by video from the surgeon's lounge rather than leaning over the surgeon's shoulder. "I was able to reach my hand into the surgical field and have it appear on the same monitor as the resident I was doing the case with," Ponce said.

Importantly, he was able to demonstrate that coaching could be delivered that way without slowing down the procedure and requiring only about 15 minutes of setup time. "It also offers much greater autonomy to the resident -- I'm not breathing over them." A scientific presentation on that work, "Telesurgery: Use of Augmented Reality in Orthopaedic Education," was one of the prize winners at this year's American Academy of Orthopedic Surgeons conference.

Ponce is convinced this sort of virtual coaching -- where a collaborator can not only give spoken instructions but point out exactly where to place an instrument or make an incision – has great potential. "It's not unreasonable to say that this will be the standard of care in the near future," he said.

As a practical matter, a setup employing a high-definition camera and monitor is still a superior experience compared with Google Glass, at least as the technology exists today, Ponce said. After all, it's still a prototype rather than a commercial product, and it does not yet provide HD video. "This technology, while amazing, is going to need several iterations to refine it," he said.

The Google Glass demonstration, which occurred in September, was also a somewhat artificial scenario. The operation was the sort of surgery Ponce performs on a routine basis, meaning he didn't need a lot of coaching. Still, he found having Dantuluri virtually engaged interesting. "What we really don't do as surgeons, we rarely attend surgery with one another. So it was nice to see where he likes to put his retractors, the way he likes to do things."

Where he thinks this sort of remote consultation could be extremely useful is when surgeons are called on to perform a procedure that they don't normally do. For example, as someone who paid for medical school with military service, in 2006 he found himself serving in Iraq as an orthopedic surgeon, but called on to perform emergency vascular surgery. A soldier came in with a large vein cut in his thigh, and it was situation where, "if it wasn't me, it wasn't going to be anybody," Ponce recalled. "It wasn't arterial, but it did need to be repaired. I was able to do it, but it would have been nice to have been able to dial up a vascular surgeon to assist."

Add to that the promises of haptic touch technology, and the possibilities become more amazing -- to the point of giving tactile feedback to someone's hands/body as they guide them through a procedure, or even controlling a robot from afar.
Reply  |  Post Message  |  Messages List  |  Start a Board

With these sorts of rapid technological advances, we are this close -- this close -- to having the holodeck from Star Trek: TNG!  :D
Reply  |  Post Message  |  Messages List  |  Start a Board

I did ask about the risk of this being a distraction. Dr. Ponce said no, because he actually had to glance up and to the right to see the projected virtual image. There were plenty of times during the procedure when he was busy and so ignored it.

Remember that using cameras and monitors in the operating room to provide magnification or a better view of the area where the surgeon is working is not a new thing -- there are some procedures where this is essential. So being able to glance at a video image to get additional info, beyond what can be seen with the naked eye, is something many surgeons already have practice doing.
Reply  |  Post Message  |  Messages List  |  Start a Board

It is awkward. But some compelling apps are emerging, like the recently introduced translation capability. I suspect Glass will thrive in niche markets for a while until people get used to it. But Google does have to do some work to assure people they're not being filmed all the time.
Reply  |  Post Message  |  Messages List  |  Start a Board

Using Google Glass in surgery takes it into one of the more difficult environments, but consider it for less demanding environments like doing machine repairs, where a technician who's stumped can call in to an expert and get this same kind of guidance for fixing a refrigerator or washing machine. Lots of business use potential in it.
Reply  |  Post Message  |  Messages List  |  Start a Board

The software vendor mentioned here actually does more business in field service repair sorts of scenarios than in healthcare, even though one of the company cofounders was a surgeon and originally envisioned the tech for healthcare applications.
Reply  |  Post Message  |  Messages List  |  Start a Board
InformationWeek Is Getting an Upgrade!