A week before Google is expected to release Google Fit at its I/O conference, several vendors unveiled Google Glass-related healthcare products. Shipments of the smart glasses could reach 6.6 million units in 2016, compared to the measly half-million units sold in 2012, according to IHS Research.

Apps are crucial to the success of Google Glass, and healthcare developers are rising to the challenge, enabling new and existing applications to work with Google's powerful eyewear. EHR developer drchrono this week began accepting beta test applicants for a Glass-enabled version of its cloud-based software. Wearable health records (WHRs) will become the preferred way for providers to interact with health data, CEO Michael Nusimow predicts in an interview. "We are definitely ahead of the curve, but since we started asking doctors to sign up for our beta program, the reaction has been overwhelmingly positive and excited about using Glass in their practices," he says.

Using Glass and drchrono, physicians can use voice commands to take a picture that's automatically added to a patient's EHR. They also can record videos of consultations or surgeries so scribes or coders can accurately bill after the procedure, the developer said. Glass can show real time data-streaming of patient encounters, or allow doctors to skim through their day's appointments and patients' medical files.

"Google Glass was a great addition to drchrono's EHR interface," Dr. Bill Metaxas, a physician at the Foot and Ankle Institute of San Francisco, told InformationWeek. "It allows me to capture the first-person perspective in both image and video in a medical examination. Patients are impressed by Glass as a new technology and comment on it favorably. Only one or two patients have expressed concerns about privacy," he added, "and we make sure to reassure them that we are using it in a secure manner." 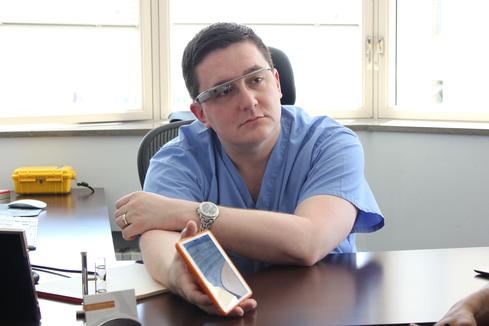 By switching to Glass, Nusimow said, physicians can focus more attention on patients. "Tablets and wearable devices force us as EHR developers to build an interface that doesn't get in the way of patient face time while still automating and saving time on the 90% of healthcare paperwork that happens once the patient leaves the exam room," he explained. "Wearable devices like Glass are at the bleeding edge of technology right now,

@Alison yes, I remember when that news came out. I was wondering because quite a number of doctors do wear prescription lenses and so may need that component built in. The only thing about adding it is that it makes each pair only fully useful for the one for whom the lenses are prescribed. It is also possible, of course, to wear contact lenses, but some of us with prescription lenses wear our glasses most of the time.
Reply  |  Post Message  |  Messages List  |  Start a Board

I don't know the answer to that question, @Ariella, and I didn't think to ask... sorry. I do know earlier this year Google Glass added a prescription option, earlier this year.
Reply  |  Post Message  |  Messages List  |  Start a Board

Very interesting, Alison. Do you know if the healthcare workers will have the option of having their presciptions built into the lenses? For people who like to wear contact lenses part of the time and glasses part of the time, two pairs might be necessary.
Reply  |  Post Message  |  Messages List  |  Start a Board
InformationWeek Is Getting an Upgrade!