Students can replay lectures they missed or skim through ones they attended for forgotten details.

When students miss one of Frank Fedel's lectures in the Orthotic and Prosthetic Program at Eastern Michigan University, they can capture the replay on video. Even when they catch him live, they might want to skim the video for key details. Even when he demonstrates a procedure or examination in class, they might be able to see the details better on the video.

"Students are pretty much begging me have other faculty do the same thing," Fedel said, an assistant professor and research director for the program.

Medical school students at Case Western Reserve University have a similar opportunity, using the same lecture capture software from Panopto. "It gives students an opportunity to look at things in the evening, on their own time, in their spare time -- and review over and over what is taught in the lecture halls," said Victor Guinto, manager of academic technologies at the medical school. 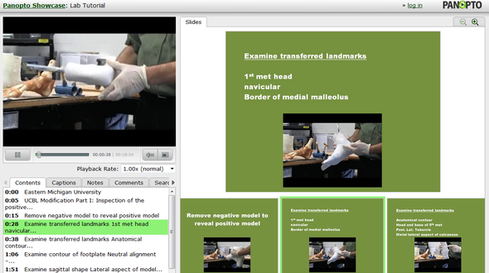 Video of an Eastern Michigan University orthotics lecture indexed to a set of slides.

In both cases, part of the key to making the video useful as a study aid for students with limited time is that playback is indexed to any slides presented in conjunction with the lecture -- the slides act as a rough outline of the content and allow students to skip around as needed or search by keyword. Panopto VP of marketing Ari Bixhorn said that the video search takes advantage of text on slides as well as a transcript of the lecture. Panopto uses human translators rather than voice recognition, and the expense of transcription is built into the annual subscription, he said. "We can get up to 99% accuracy on the information in any video, which is particularly important in the healthcare space or in any technical space."

Guinto said another feature popular with busy students is "to set the playback to 2X so they can listen to the lectures at twice the speed -- and they claim to be able to retain it."

For Fedel, video is a tool for conquering time and space.

"Video is a very linear format for presenting information, so I looked for something more sophisticated," Fedel said. He first started experimenting with video lecture capture in 2009, initially using Panopto in parallel with another solution. Since he settled on his tool of choice, he has been promoting the use of Panopto to other faculty "and we have a dozen and a half that are passionate about using it," he said. In an official university pilot last year, more than 100 professors signed up to use the tool.

Although Fedel is training physicians' assistants rather than doctors, the nature of the training is similar, he said, and some of the best uses of video are for capturing live encounters with patients. For example, he will use a camera mounted on a pair of glasses while fitting a prosthetic to someone who has lost a limb. "Students aren't always able to get access to patients," he said, and even when they are in class for the demonstration, in a class of 20 not everyone is going to get an ideal view of the procedure.

"When we have a guest patient come in or a model come in, subsequent cohorts of students get to see that," Fedel said. He can further enhance the video by adding in slides to illustrate the concepts he is demonstrating.

Fedel has also experimented with having students use the same technology to capture video of their own work for him to review. Also, students can go back and see their own performance, which is significant because "one of the critical things is for them to be able to see themselves in a high-pressure situation," he said.

In general, medical schools have been slow to adopt the "flipped classroom" concept getting so much attention in other sectors of higher education, where students get their lectures on video and use classroom time for discussion or other sorts of coursework. However, Guinto said Case Western has been promoting the use of video and other technologies in conjunction with a new teaching model that emphasizes small-group problem solving. Video lectures have proven particularly useful for pulling in guest lecturers who are leaders in the medical world or simply working physicians, he said. "It lets us have more flexible schedules for getting them in and out. Physically, to have them here for 50 minutes for a single lecture is a big deal."

Like Fedel's program, the medical school has also found video to be a useful teaching tool for presenting techniques to more students than would be able to see them up close. An example is the gross dissection of cadavers. Students who are in the room can use iPads for "high resolution portable visuals" and webcasting video from the wet lab means "students can view the dissection from the lecture hall," Guinto said.

Fedel also foresees applications where small videos on specific techniques could be made available for just-in-time mobile education. A student on a clinical internship, faced with a specific challenge, could then download one of these learning modules to their phone "and then walk in, confident at doing what they need to do," he said.

David F. Carr is editor of Information Healthcare and a contributor on social business, as well as the author of Social Collaboration For Dummies. Follow him on Twitter @davidfcarr or Google+.

We welcome your comments on this topic on our social media channels, or [contact us directly] with questions about the site.
Comment  |
Email This  |
Print  |
RSS
More Insights
Webcasts
Keys to Better Cyber Risk Assessment
Take DevOps to the Next Level
More Webcasts
White Papers
How to Avoid the Challenges of Cross-Platform Data Access Governance
Annual Cybercrime Report
More White Papers
Reports
We Need Your Input: Trends in Workforce Optimization
Intelligent Outcomes Are Key to Business Resilience
More Reports