50%
Tweet
Nurses and other healthcare workers who communicate vital patient information say they need an alternative to outdated pagers and insecure smartphones.

At most hospitals, nurses are still required to communicate with colleagues and doctors via Voice over IP (VoIP) or pagers. But many nurses, who tend to be constantly on the go, are increasingly ignoring policy and are texting from their smartphones instead. This approach carries risks: Not only are the phones insecure, but they could also introduce germs into sterile environments.

Pagers may be less risky, but they aren't efficient. They cost US hospitals $8.3 billion in 2013, according to a report by the Ponemon Institute: $3.2 billion through time-consuming discharge processes and another $5.1 billion while clinicians waited for patient information (an average of 46 per minutes per day).

Fed up with waiting for pages, nurses are taking matters into their own hands. Although 89% of hospitals forbid the use of personal smartphones at work, 67% of hospitals report nurses are using their iPhones, Androids, and other devices to support clinical communications and workflow, according to a new report by Spyglass Consulting Group. Hospital IT departments know nurses are doing this, but they don't have the time or the resources to monitor their usage. Of the 53% of hospitals with BYOD programs, only 11% include nursing staff.

[Innovation by popular demand? Read Crowdfunding The Next Healthcare Hit.]

Hospitals recognize they must improve nursing communications. According to Spyglass, only 4% currently have nursing smartphone systems installed, but 51% are investing in or evaluating these technologies, and half of the more than 100 hospitals surveyed have already implemented VoIP-based systems. 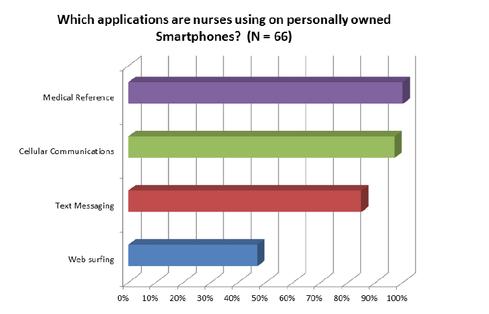 Despite being user-friendly and widely available, consumer smartphones are not designed for hospital use, 89% of respondents told Spyglass. Enterprise-class solutions, especially systems that integrate with EHRs, are rare since hospitals want smartphones to support real-time VoIP, HIPAA-compliant secure text messaging, alerts and alarms approved by the Food & Drug Administration (FDA), simple nursing documentation, and bar code scanning for medication administration. In addition, 88% of survey respondents worried about the risk of mobile devices on their network -- particularly violating HIPAA security and patient privacy rules -- and the danger of introducing viruses and other malware to the network.

But merely giving nurses secure texting capabilities isn't enough, said Dr. Benjamin Kanter, chief medical informatics officer at Palomar Health, in an interview. "Can you make a message that's smart, that can escalate, and can you start to message within the context of a patient's record? The message is only one piece of the puzzle. You've got to provide context and you've got to be able to create action," he said. "Usually for what nurses are trying to communicate in a hospital, something triggering has occurred and most secure texting systems don't take that into account. It's very different in a hospital environment."

When Palomar Medical Center, in Escondido, Calif., opened its doors in August 2012, it featured distributed stations to keep nurses closer to patients. The hospital wants its nurses to be equipped with enhanced communication capabilities and is exploring new tools, like AirStrip One and Sotera's wireless patient-monitoring devices.

Hospitals must improve their communication systems because medicine today involves so many specialists and handoffs, said Dr. Steven Davidson, senior VP and chief medical informatics officer at Maimonides Medical Center in Brooklyn, N.Y. But most currently available tools don't fit all requirements, especially as many hospitals use more than one EHR.

Today, Maimonides allows all clinicians to see which clinicians are in the hospital and how to reach them, a move designed to speed up patient care. In the future, the hospital would like to integrate that information with the EHR so responding clinicians can immediately view patient records rather than looking them up separately, Dr. Davidson said. Later this year, he added, Maimonides will work to develop bedside medication verification that uses a handheld device, probably built off a smartphone.

Alison Diana has written about technology and business for more than 20 years. She was editor, contributors, at Internet Evolution; editor-in-chief of 21st Century IT; and managing editor, sections, at CRN. She has also written for eWeek, Baseline Magazine, Redmond Channel ... View Full Bio
We welcome your comments on this topic on our social media channels, or [contact us directly] with questions about the site.
Comment  |
Email This  |
Print  |
RSS
More Insights
Webcasts
The 6 Must-Haves for Practical Cloud Security
5 Steps to Integrate SAST into the DevSecOps Pipeline
More Webcasts
White Papers
6 Emerging Cyber Threats That Enterprises Face in 2020
2019 Security Technology Sprawl Report
More White Papers
Reports
Apex Report: Global Cyber Infection
The Definitive Guide to Managed Detection and Response (MDR)
More Reports

You bring up some good points, CommsEngineer, especially when you add BYOD to the mix. Then, in addition to the technical issues you cite regarding cell networks, you have a mix of older and newer phones, and individuals' potential non-payment or limits on their texting/calling plans. These concerns could well be one reason so many hospitals apparently have opted to stay with pagers, especially as one study (and I cannot for the life of me remember where I read or heard about it although I'll try to dig it up) found that nurses prefer carrying two devices (doctors would rather carry one).
Reply  |  Post Message  |  Messages List  |  Start a Board

I read your article with interest, but as an RF systems designer, I think you overlooked an important point.

Everyone loves their 'cell'; it is their be-all and end-all of technology....many think it talks to satellites, and that the only things it can't do are things that no one has thought of writing an app for.  It is, frankly, all they know in the communications world.

However, despite references to "HIPPA", the handy program that seems to be able to make or break any argument on medical matters regardless of the position, there is something FAR more important:

The cellular infrastructure is haphazard, fragmented, constructed in vastly different ways by varying carriers, and is simply NOT a defined life-safety system. Very, very few cellular base stations have back up power for more than a couple of hours of run time, and 1 in 20 has a generator. Backhaul routes from the sites to the cellular MTSOs are least-cost, non-redundant, and easily disrupted.

It does, and often has, completely collapse under heavy system load, or in the event of natural disaster. I point to the Boston Marathon, any busy sports or entertainment venue, earthquakes (even minor ones)....essentially anywhere great numbers of subscribers reach for the beloved 'cell' at once.

I can imagine the problems when Nurse Jones' battery dies, the service is cut off for a missed payment, or she decided to upgrade and change numbers without efficiently notifying the world.

Cellular infrastructure is fine for this posting I'm typing, two teenagers planning to cut class, or for planning lunch with a friend. But, for my upcoming surgery, when I need a pint of blood, I don't want it to depend on Nurse Jones knowing Dr. Brown's personal mobile number, both accounts being up to date, equipment being in good shape, and the system working.   Even if hospital-subscribed,  properly cleaned and maintained devices are used, it's still a consumer network, built with precious little redunancy, and engineered for sunny-day, normal conditions.

Regardless of the 'trendiness' of the 'cell', calls for the removal of healthcare-agency engineered, controlled, and operated life-safety communications systems are specious, and downright dangerous.

I'll trade you all the HIPPAs in the world for a reliable public-safety grade, properly installed and engineered, well-backed up professional communications system.
Reply  |  Post Message  |  Messages List  |  Start a Board

Sure, any item a doctor or nurse handles or carries needs to be kept clean. This is "the devil I know vs. the devil I don't" tradeoff, where there are established practices and policies for pagers that need to be adapted to smartphones. As background reading, I found this blog post from Rock Health (which invests in health IT startups) laying out the reasons why the boring but reliable old technology of pagers still trumps novel smartphone tech in many ways.
Reply  |  Post Message  |  Messages List  |  Start a Board

Good point, Tom. Any nurses want to weigh in here? How would you like a smartwatch instead of a pager?
Reply  |  Post Message  |  Messages List  |  Start a Board

Hospital paging may be an actual use-case for smartwatches.
Reply  |  Post Message  |  Messages List  |  Start a Board

You wear a pager on your belt and put your hands on it just like a smart phone, so how is it any different from a germ perspective? Okay, you certainly use the smart phone more than a pager, and you would use it outside of the work environment. But doctors and nurses don't take those pagers off when they leave the hospital. Everything needs a swipe, right?
Reply  |  Post Message  |  Messages List  |  Start a Board

It's hard to imagine someone who needs quick and easy communications more than a nurse. I wonder if the nurses' needs are being dealt with second in line, after the doctors' needs? Also, how do tablets fit in here? Aren't more nurses being asked to use tablets to work with patient records as they move around the floor? It seems like IM on tablet would be faster than pages.
Reply  |  Post Message  |  Messages List  |  Start a Board
Editors' Choice
Hot Topics