An Apple patent made public recently points to potentially larger plans for the iconic computer and device maker's Apple Watch. The wearable may eventually offer capabilities of a medical device.

Apple appears to be eyeing the wearable medical device market for its Apple Watch, suggests the company's patent filing released Thursday by the US Patent & Trademark Office.

Apple's "Care Event Detection and Alerts" patent features a wearable device that communicates with a smartphone to monitor the user's vital signs and health. It detects problems such as a heart attack or fall, and transmits the alert to a smartphone, which can then notify people listed as emergency contacts.

Although the image that Apple provided with its patent application depicts a jogger with a fitness monitor strapped to the user's bicep, rather than the Apple Watch, the company notes in its filing that "it is understood that this is an example." The patent then goes on to note that the electronic device may be any kind of electronic device, including "a wearable device," which could suggest the Apple Watch. 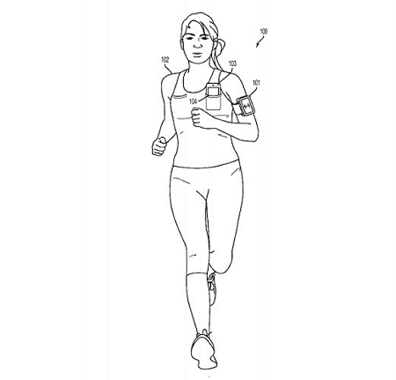 Apple's patent outlines how it envisions the device may be use:

Care events may be any event that may occur for which a user may need care. For example, care events may include a car crash, a bike accident, a medical emergency such as a heart attack or an aneurysm, separation of a child from the child's caregiver, a dementia patient becoming lost, an avalanche, a fall, a mugging, a fire, and/or any other event for which a user may require medical, police, family, fire rescue, and/or other kind of assistance.

In order for the user to receive care for such a care event, one or more individuals or entities who provide such care (such as friends, family, firefighters, ambulances, hospitals, police, and so on) may need to be alerted to the fact that the care event has occurred. Often, the user may contact such individuals or entities upon the occurrence of the event. For example, a user who has been in a car crash may telephone emergency services for an ambulance. However, in many cases the user may be incapacitated and/or otherwise unable to initiate communications regarding the care event.

The user would be allotted a certain amount of time to cancel the alert before it is sent, according to the patent. And should an alert be sent, the emergency notification may also include the user's medical records or information that the device has gleaned.

Apple is clearly in the early stage of any consideration in turning the Apple Watch into one that could also double as a medical device. In order to call a product a medical device, it needs to go through the process of seeking approval from the Food and Drug Administration (FDA) -- a very lengthy process that some companies abandon and decide to call their product a fitness tracker.

Last year, Apple reportedly cancelled plans to include medical features like heartbeat monitoring, blood pressure levels and stress into the Apple Watch, according to a Wall Street Journal report. Those plans were nixed, in part, because of regulatory hurdles the company could face.

However, it appears that Apple is still interested in these areas, despite cancelling its plans last year. The patent states at least one sensor will be part of a heart rate monitor, a respiratory system monitor, a blood pressure monitor, or a temperature sensor.

Although Apple is apparently aiming to hit some of these major four illnesses with its patent, how soon consumers will see an Apple Watch doubling as a medical device has yet to be seen.