3 comments
Comment Now
Technologies such as sensors, GPS, and even senior-focused social networks can help seniors continue to live at home. 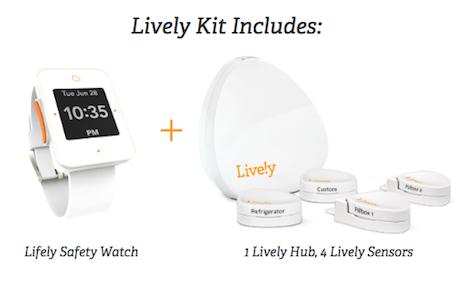 Sensors
Advanced remote patient monitoring sales accounted for $29.7 billion worldwide in 2014, according to Kalorama Information, and a good deal of that demand came from home treatment and health facilities. "We have received significant interest from elder care providers who are seeking to keep the elderly in their homes rather than moving them to assisted-living centers," Jason Johnson, chair of the Internet of Things Consortium, told Scientific American.

Sensors can be placed around the home -- on doors and windows -- as well as in appliances and on the patient. They alert caregivers if the senior misses a meal, doesn't get out of bed, or falls. Some Alzheimer's patients, for example, remain at home under a program that monitors their movements via sensors and smartphone apps, and alerts their nearby caretakers to risky behavior -- such as leaving the house, forgetting to eat, or leaving water running too long.

One example of a worn sensor is the Lively safety watch, which looks like a smartwatch. "A lot of people don't want to wear the garage door opener," CEO Iggy Fanlo told InformationWeek. "We had to make a beautiful product people aren't ashamed of wearing."

The device, which detects falls as well as inactivity and other situations, connects to sensors and an around-the-clock call center. The waterproof device also has a one-push help button, switchable colored bands, medication reminders, daily activity sharing, step counting, and family alerts.

While there will always be exceptions regardless of how simplified tech becomes, these eight technologies detailed here will be a great help to caregivers (and remote family members) once the tech matures.
Reply  |  Post Message  |  Messages List  |  Start a Board
Editors' Choice
Hot Topics