BaseHealth's Genophen service wants to reach consumers (through their doctors) with strategies for "modifiable risks" -- a more FDA-friendly approach.

BaseHealth is not the first company to suggest that access to genomic analysis could help us manage our health better, but the startup, publicly launching its product this week, promises to do a better job of putting genomic information in context.

Founder and CEO Hossein Fakhrai-Rad holds a doctorate in medical genetics and spent three years as a visiting scholar at the Stanford Genome Technology Center in addition to working in biotech. By working with doctors rather than bypassing them, he hopes to not only avoid regulatory entanglements but give patients a more comprehensive picture of their health risks and what they can do about them.

This contrasts with the direct-to-consumer approach of 23andme, which the US Food and Drug Administration ordered to stop making medical claims for its product in November. The FDA became concerned that 23andme was offering consumers a more definitive analysis of their health risks than was justified by the underlying science and without adequate clinical guidance. While trying to resolve the impasse with the FDA, 23andme has been reduced to marketing its product as providing genetic clues to an individual's ancestry rather than information about health risks. Yet a current New York Magazine article on "The Google of Spit" shows the company has not abandoned its big data, mass-market ambitions.

[Is genomics the answer to a longer life? Read Startup Aims To Unlock Family Medical History.]

Fakhrai-Rad thinks he has a better way. "23andme and other direct-to-consumer companies, they were the first wave. But we are the second wave," he said. His approach is to treat genomics as an important factor, but not the only one in, in analyzing health risk factors. As an example, he cites diabetes, a disease that runs in his family -- and one associated with both genetic and non-genetic risk factors such as diet and exercise. To focus on either one to the exclusion of the other is a mistake, he said.

Since the first complete sequencing of a reference human genome in 2001, the price of detailed genetic analysis has declined to the point where it is practical to analyze the genetic sequence data for specific individuals in search of markers associated with specific diseases.

BaseHealth involves doctors not only to avoid trouble with the FDA but because that's the best way to put genomic analysis in context, Fakhrai-Rad said. "The output is a personalized health assessment -- but the patient won't get access to any of this until the patient has had a consultation with the physician."

BaseHealth's Genophen health analytics service starts with either a complete genomic analysis or a more limited (and less expensive) genotype scan for specific risk factors. Before opting for the genotyping, Fakhrai-Rad said he would encourage patients and their doctors to consider the likelihood that they might want to run another such scan in the future -- in which case doing a complete genome analysis in the first place might be more cost effective. 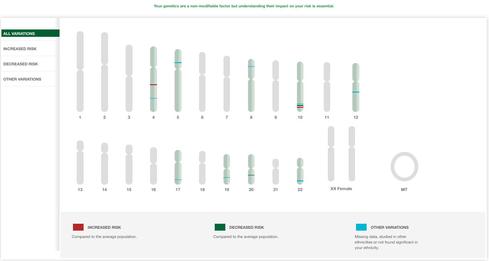 Genophen also tracks the same sort of data as other personal health records portals, such as weight, lifestyle habits, and previously diagnosed disorders, with integration for wearable health trackers, starting with the Fitbit, coming soon.

If the assessment identifies significant risks, doctor and patient can then work together to come up with a plan for minimizing those risks, Fakhrai-Rad said. For example, the Genophen analytic portal includes a "what if" tool, allowing the doctor and patient to "start playing around" with the model, seeing what specific changes to diet, exercise, and lifestyle could do to lower the risks. Doctors can play an integral role in formulating the plan, then give patients access to the portal so they can continue to reference it and post updates on their progress.

In its risk analysis, Genophen emphasizes "modifiable risks," those that can be minimized with diet or lifestyle changes. It places less emphasis on "unmodifiable" ones. "We're not focusing on diseases you can't do anything about," Fakhrai-Rad said.

BaseHealth CTO Prakash Menon said he is just starting to investigate possibilities for integration with electronic health record systems, which might make sense given the drive for physicians to achieve the kind of patient engagement Genophen delivers as part of the federal Meaningful Use program. He anticipates building a first integration in the next three to four months.

"For now, we're focused on physicians, not IT -- on the use of the platform and of genomics" as part of a practice, he said.

The first beta customers of the service were mostly physicians in the San Francisco area and a few concierge practices located elsewhere, Fakhrai-Rad said. He sees other "boutique" medicine practices, whose patients are willing to pay more for better healthcare, as a likely first market for expansion. BaseHealth also hopes to get the attention of other internists and primary care doctors interested in offering more proactive care. Hospitals seeking to promote population health programs that lower the cost of care could be another potential market segment in the long run, he said.

David F. Carr oversees InformationWeek's coverage of government and healthcare IT. He previously led coverage of social business and education technologies and continues to contribute in those areas. He is the editor of Social Collaboration for Dummies (Wiley, Oct. 2013) and ... View Full Bio
We welcome your comments on this topic on our social media channels, or [contact us directly] with questions about the site.
Comment  |
Email This  |
Print  |
RSS
More Insights
Webcasts
Bolstering Your Enterprise Cyber Risk Assessment
Monitoring Critical Cloud Workloads
More Webcasts
White Papers
Research from STL Partners and Vertiv Reveals Why Telcos Should Prioritize Efficiency and Sustainability in 5G Network
Top Serverless Security Risks and How to Mitigate
More White Papers
Reports
Future Proofing Your Network for 5G
A Decade of Passive DNS
More Reports

As I recall, 23andme got into trouble because the FDA decided consumers might not be able to handle information about their own health -- even though consumers can't go out and order themselves a hyseteroctomy, masectomy, or other drastic surgery as the result of a genetic study. This startup definitely sidesteps that issue, although consumers could still shop around to find a surgeon willing to take more drastic action than a situation warrants, if they really want to. Personally, I'm not interested in this type of test: I know what my greats and grandparents died from and recognize diet, exercise, and low stress are beneficial; cholesterol, tobacco, and sugar are bad.
Reply  |  Post Message  |  Messages List  |  Start a Board

The problem is judging the value of a product that offers only statistical data. Unless the data shows a significant chance of getting a certain disease, it's of uncertain value. You can't really tell how much it's worth to know whether you have a 0.65% greater chance of getting a disease than the average person.  Absent a rational way to make the decision, you're not likely to have a health service that attracts a lot of customers.
Reply  |  Post Message  |  Messages List  |  Start a Board

Would you pay out of pocket for a better glimpse at what your genetic makeup and lifestyle say about your future health?
Reply  |  Post Message  |  Messages List  |  Start a Board
InformationWeek Is Getting an Upgrade!