Starkey Hearing Technologies turns an iPhone into a remote control for its wireless hearing aids.

Given the popularity of earbuds, transforming an iPhone into a hearing aid controller seemed like a natural transition to Starkey Hearing Technologies. Two years ago, the US hearing aid manufacturer teamed up with Apple to design an app, called TruLink, that leverages the iPhone's power, audio controls, and user friendliness. By pairing a hearing aid with an iPhone, iPad, or iPod with familiar Apple controls, Starkey hopes to sell more hearing-impaired consumers its Halo wireless hearing aid.

Only about 10% of today's hearing aids are wireless, according to Starkey. That's one reason so many people with hearing issues don't seek help. As a result, only one out of every five individuals who could benefit from a hearing aid wears one, according to the National Institute on Deafness and Other Communication Disorders. About 48 million people suffer some degree of hearing loss -- one-fifth of the US population.

"We wanted to partner with Apple to make hearing aids cool, if you will," Dave Fabry, PhD, VP of audiology and professional relations at Starkey, said in an interview. "As we age, we lose manual dexterity. Although many hearing aids have user controls directly on the hearing aids, rather than having dedicated remote-control or switch-on hearing aids, Halo now enables the Apple device to serve as the remote control to turn the volume up and down, change the volume for the listening environment, or answer a cellphone call."

It's not quite as easy as simply downloading an app. Hearing aids are medical devices that require fittings.

Starkey recently trained more than 1,000 audiologists online and hundreds more in person, Fabry said. "We are training our customers not only in how to fit our hearing aids, but in working with the app in combination with the hearing aid."

Starkey trains audiologists on the basics, including downloading apps and using Bluetooth. It also recommends iOS 7 because it enables automated updates. "Starkey has... already used online support to push out software support to our customers for their devices," Fabry said. "This is a different model. This allows us to push it out to the app so we can be certain everyone with the app is current. With iOS 7, if they agree to the update, they won't even know it's updated." 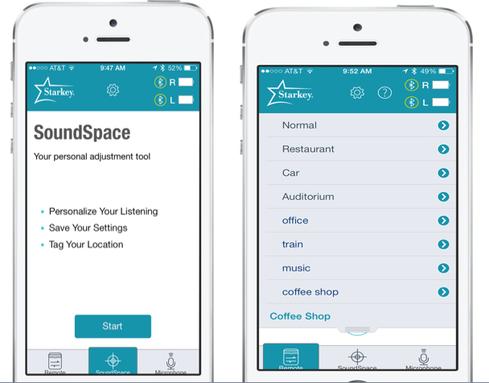 Starkey credits its relationship with Apple for Halo users' ability to leverage many standard iPhone features, such as Siri. The company, which considers itself a technology developer, has offered online tools and apps for several years.

Users can personalize and geotag settings pertaining to particular environments based on the noise level -- for example, setting the device up for the mall, the library, or home. Users can set Halo to adjust automatically when they are driving and can use the Find My Hearing Aid feature in case of a misplaced device. The TruLink app controls the hearing aid from an iPhone, iPad, or iPod. Halo also uses Apple's sound technology for streaming music.

"The sound, clarity, and general hearing aid mode are much better from what I'm used to," said tester David Brahee, who lives near Minneapolis. "Its software package is easy to manipulate and understand, almost intuitive as to where you go next. I suppose it's even better if you were already an iPhone user."

Derrick Coleman, who plays for the Superbowl champion Seattle Seahawks, was the first patient to use Halo and has become a spokesman for the company.

But many less well-known users are testing the hearing aid and apps, too. Brahee, a hearing aid wearer for about four years, volunteered to test Halo because he enjoys checking out new technology. Because Brahee uses an Android smartphone, Starkey loaned him an iPhone. But while Brahee likes Halo, the hearing aid isn't enough for him to consider trading in his Android for an iPhone. "I'd be more apt to look at that and ... a new set of hearing aids with the Droid controls," he said.

Fabry said the company is considering developing an Android version of Halo. The Bluetooth 4.0 standard will make it easier to develop products for Google's open platform, he said.

Alison Diana is an experienced technology, business and broadband editor and reporter. She has covered topics from artificial intelligence and smart homes to satellites and fiber optic cable, diversity and bullying in the workplace to measuring ROI and customer experience. An ... View Full Bio
We welcome your comments on this topic on our social media channels, or [contact us directly] with questions about the site.
Comment  |
Email This  |
Print  |
RSS
More Insights
Webcasts
Fintech at SaaS speed: Navigating the scale & security challenge
Disaster Recovery/Business Continuity in the New Normal
More Webcasts
White Papers
Must-Read Research: Why Sustainable 5G Networks are a 150-Year-Old Problem
The State of Zero-trust Security Strategies
More White Papers
Reports
Are We Cyber-Resilient? The Key Question Every Organization Must Answer
Cloud Misconfiguration Mayhem
More Reports

Thanks for your feedback. I am sorry you are having such an awful time with these hearing aids. I do have friends who  use hearing aids, actually, and their experiences vary. I think they are extremely personal devices so experiences vary widely. And they don't go to the VA, so care is different, too.
Reply  |  Post Message  |  Messages List  |  Start a Board

Precisely, @Susan! As we've seen from Laurie's comments, it's vital for all members of this community to work together closely. Just because products are integrated doesn't necessarily mean the patient will be satisfied. We all rely so much on our smartphones and tablets that it's critical to extend this capability to as many individuals as possible. (And thanks for your kind words about the pic, taken in my front yard!)
Reply  |  Post Message  |  Messages List  |  Start a Board

@Laurie, your frustrations and experiences underscore how important it is for phone makers, developers, and healthcare providers -- in this case, hearing aid-makers -- to closely partner, not only on development but on support. We're talking about a health device, not a game or even a business app, and so ensuring the patient's satisfaction with the end result is vital.
Reply  |  Post Message  |  Messages List  |  Start a Board

Precisely. Android will get it, but focusing on iOS first is a good step. We are not talking about just a game. Making this work perfectly in every platform requires time and dedication. (On a different note, very nice new picture. :D )

You may want to check out some online communities that specifically address people with similar issues, Laurie. I cannot imagine you are alone in this frustration and, although I am no expert in this matter, some phones may be more hearing aid-friendly than others? I don't know if this site will be helpful, but the president commented on this story and shared some details about the site with me via email. Called HearingTracker.com, it includes users' reviews of hearing aids -- and surely some of those reviews include their compatibility and sound quality when used with various phones? I hope you find the right phone to suit your needs!
Reply  |  Post Message  |  Messages List  |  Start a Board

@Iozza, is this a problem with your iPhone and a Starkey hearing aid? Or is this a problem with the iPhone in general? If it's the first, let me know and I'll see if I can put you in touch with someone from Starkey if you haven't contacted them yet. If it's the iPhone itself, then I suggest contacting the store where you bought the device if Apple hasn't helped you.
Reply  |  Post Message  |  Messages List  |  Start a Board

I agree, Susan. For a system this sophisticated, I'd imagine developers have to work on the dedicated platform. In this case, Starkey credits its close developer relationship with Apple for some features and capabilities. Given the size of the Android market, obviously the company expects to move into that space although it will be more difficult because of the number of hardware developers using Google's OS.
Reply  |  Post Message  |  Messages List  |  Start a Board

That is a great idea, @HearingTracker. As we've seen from the success of other review sites, it's important for users to share their experiences -- whether on this site or another one -- to alert other potential buyers and developers themselves about improvements (in the tech, support, or service) customers want to see.
Reply  |  Post Message  |  Messages List  |  Start a Board

Many apps get released first on the iOS platform and later on on Android. What is important here is not on what platform the hearing aid is available now but the fact that something like this is available and will help lots of people.

I was tempted to say, "it soudns like a great idea," but I wouldn't to be accused of making a pun here. Still, yes, it does seem to be a great way to improve the experience of hearing aid users.
Reply  |  Post Message  |  Messages List  |  Start a Board
InformationWeek Is Getting an Upgrade!