Quest Diagnostics capitalizes on regulatory change and gives patients access to their own lab results on the web and mobile devices, boosting its own EHR software in the process.

Quest Diagnostics now offers patients web and mobile access to their own lab results, capitalizing on a recent regulatory change that made doing so legal in all 50 states.

Originally proposed in 2011, the rule updating provisions of the Health Information Portability and Accountability Act and the Clinical Laboratory Improvement Amendments is part of the US Department of Health and Human Services initiative to give citizens greater access to their own health data. It allows people to get direct access to lab records, rather than going through their doctor. The final rule requiring labs to provide individuals with access to test results, either on paper or electronically, was announced in February and went into effect this month, with an October deadline for labs to comply.

"We complied as of April 7," Tom Wagner, CTO for Quest Diagnostics, a Madison, N.J.-based clinical laboratory services company with worldwide operations, said in an interview. "The reason it's important for us is we believe continuity of care needs to involve patients in their own care."

[Is it the end of an era for hospital pagers? Nurses Say Pagers Must Go; Hospitals Drag Feet.]

Patients can now access request lab results through the MyQuest by Care360 patient portal, which is accessible through the web and mobile apps. 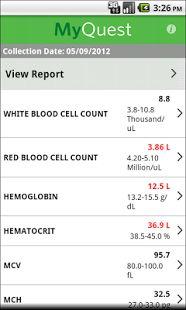 The HHS rule doesn't specifically require that lab results be made available online, only that they be provided within 30 days of a request. Quest also will honor requests from patients who want the data mailed or faxed to them, Wagner said. However, making the data available online will be more convenient for most people and also less expensive for Quest.

The HHS decision makes it easier for Quest to make lab results broadly available because it supersedes laws that were different from state to state, with 11 states prohibiting labs from bypassing doctors and delivering the results directly to patients. Wagner said some states have laws, which Quest must still respect, giving doctors a window of opportunity in which they can be the ones to share lab results with their patients. For example, in California it's seven days. In the absence of such restrictions, consumers should be able to access their results within 48 to 72 hours of a test, he said.

According to a Wall Street Journal article, HHS declined to require that lab results carry a disclaimer urging that patients seek a doctor's help with interpretation, as urged by the American Medical Association and the American Academy of Family Physicians.

"We do want to say when we provide results out to patients, that's not a substitute for professional medical judgment -- it's not designed to be that," Wagner said. Although there is not a disclaimer on every record, "there's some of that language on the signup form," he said.

By branding the portal MyQuest by Care360, Quest makes a connection with its Care360 cloud-based electronic health records service. Although the two do not have to be used together, the link to MyQuest gives Care360 customers a leg up on helping achieve Meaningful Use Stage 2 status under the federal EHR adoption incentives program. One of the requirements of Stage 2 is achieving at least a minimal level of patient engagement, convincing 50% of patients to view their health records online. Any patient who signs into MyQuest to check lab results will count toward that goal for Care360 users.

"It is an advantage, and we try to exploit it at times," Wagner said. Quest recruits most Care360 customers from among the doctors who already have a relationship with the company for lab work. The latest Black Book Rankings found Care360 to be one of the most popular EHRs for primary care physicians, top ranked by practices of 11 to 25 doctors. (Practice Fusion, a free EHR, was most popular overall in that survey, particularly among sole practitioners.)

Quest previously offered a mobile app for accessing lab data, called Gazelle, which was available for iPhones and Android phones, but there was no web version. In addition to viewing lab results, patients can use MyQuest as a personal health record for tracking other aspects of their health and care, such as prescriptions and doctor's visits, or data fed into the service from a wireless scale.

I neglected to link to Alison's column on this: Labs Must Protect Newly Portable Patient Data
Reply  |  Post Message  |  Messages List  |  Start a Board

That's an important reason -- especially if you or a loved one is one of those 7%. Of course, there's no guarantee that you'll proactively see the results if they're accessible to you and I believe the onus still lies with the healthcare provider who ordered the tests (as everyone keeps stressing: non-medical pros won't necessarily understand the results anyway), but at least it gives patients another way to stay informed and to own their data to take it to another doctor.
Reply  |  Post Message  |  Messages List  |  Start a Board

When I first wrote about it, I was happy about the law change. Quest's approach seems pretty seamless and simple to use, giving patients every option they can choose to get their results. I'd imagine all other labs will offer something similar, although not all will be as well integrated.

In all my doctors, I've only ever seen one who called every patient when you had labwork done. Her reasoning: That way patients knew she'd had the chance to review it. It was much more reassuring than the usual "we'll call if something's wrong." In those instances, you never really knew if the paperwork got lost or something. And if you rarely see a doctor then you could be walking around in happy oblivion.
Reply  |  Post Message  |  Messages List  |  Start a Board

I should have noted in the story that one argument in favor of making lab results directly accessible to patients is that about 7 percent of the time patients never even learn of an abnormal test result. The reference for that number, which I got via Quest, is here:

Would you use this service, or one like it? I'd think the biggest appeal would be to those with a chronic condition who are getting tested regularly. Lacking such a problem (for the time being), I can imagine using the web app if there was something I was concerned about but probably wouldn't bother with the mobile app.

I did think it was interesting the way the lab results portal and EHR strategies come together for Quest.
Reply  |  Post Message  |  Messages List  |  Start a Board
InformationWeek Is Getting an Upgrade!