Startups don't always get to finish what they start, even if they have great ideas. Zibdy Health is a case in point. I don't know whether it will grow into its grand ambitions or muddle along as a moderately interesting medication-management app maker. What captured my imagination in talking with CEO Hirdey Bhathal was the idea that electronic health records shared among family members would be more valuable than health records surrounded by layers of privacy protection.

"My mother's medical history should be linked to her kids' data, and it's not," he said in an interview. Bhathal estimated that if his mother wanted to create a medical will, allowing her children to inherit access to her health data after she dies, drawing up and filing the required legal paperwork would cost $10,000 to $15,000.

I had been corresponding with him for months, since he initially wrote me about a column, Why Doctors Hate EHR Software, saying he wanted to enlighten me about some of the other shortcomings of electronic health records. "There is an enormous amount of good data wasted or destroyed in the name of privacy," he wrote me in one of those emails.

Why does it matter that the medical records of family members are not linked? Because even at the dawn of the era of genomics -- the big data approach to genetic screening based on a complete genetic analysis -- family history may be a better predictor of health and health problems. 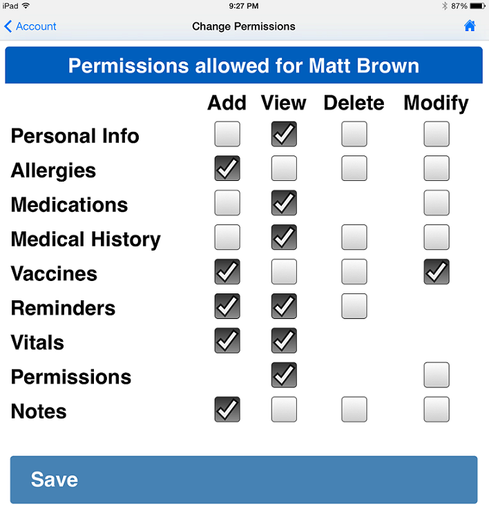 Bhathal directed me to journalist and author Kira Peikoff's article for The New York Times, in which she wrote about getting inconsistent results after ordering genomics screening reports from three different companies selling directly to consumers. The tests didn't just disagree slightly: one told her she faced the highest risk for a disorder that another classified as her lowest risk. One of the services producing wildly divergent results in her test was 23andme, a consumer service that offers an online analytics report based on a home test kit that you mail in. In November, the US Food and Drug Administration ordered 23andme to stop promoting its genomics test as a health assessment (the company continues to market the test as a means of discovering more about your ancestry, as it seeks formal approval of its consumer health app).

Another resource Bhathal pointed me to was a video interview with Dr. Francis Collins, director of the National Institutes of Health and previously one of the leaders of the Human Genome Project, extolling the value of gathering a good family health history. Since scientists managed to decode that first reference genome, the ability to do a complete genetic analysis for an individual has become almost routine, opening up exciting possibilities for applications such as cancer treatment. Collins doesn't discount any of that, but he does say that the low-tech approach of finding out whether cancer runs in the family is still valuable. Dr. Chris Eng of the Cleveland Clinic's Genomic Medicine Institute makes the contrast more explicit, saying that so far "personal genome scanning misses almost all high-risk cases," making family medical history a better predictor than genomics alone.

Yet the traditional way of gathering a family health history is to quiz the patient on it. Confession: when the doctor asks me what my grandparents died of, I'm often vague on the details. I can share more details about my parents' health (and lack thereof), but at even at that level I probably get some of it wrong. A doctor who could get easy access to my family's health records, or a summary of them, could probably do a better job of keeping me healthy.

For example, doctors typically approach finding out which drug will work best to treat a patient's hypertension (high blood pressure) through a process of trial and error. Genomics screening may eventually provide a way of identifying the best drug matches for an individual's genetic makeup, but meanwhile there's an easier way, Bhathal suggested. "If they know what worked for your mother and father, that's a pretty good place to start."

There are some online tools that can help you gather that information, such as My Family Health Portrait from the US Surgeon General's office.

Why don't we share electronic heath records among family members? Well, asking for a consolidated medical record that would include data on other family members is a lot to ask for, given that creating a consolidated medical record for an individual is still a stretch for the healthcare industry. Health information exchange (HIE) exists as community-based infrastructure in a few regions of the country and as middleware technology that hospitals implement to connect with affiliated providers and other partners, but the degree to which the data is truly integrated and consolidated and reconciled is still limited.

The HIPAA healthcare privacy law would be another reason. The law erects barriers to sharing private health information, barriers that we generally see as a good thing when they protect our privacy. HIPAA includes some exceptions for sharing private data with family members, which is intended to ensure the law doesn't interfere with family caregivers getting the information they need to support someone who is ill. In those cases, the data can be shared, unless the patient specifically objects. Still, healthcare providers have been instilled with such fear of the law that their knee-jerk reaction is sometimes to say, "I can't share that with you," whether the law would allow the information to be shared or not. Imagine the paperwork required to authorize routine, ongoing sharing of electronic medical records -- even assuming the technological capabilities required to do so.

There is a loophole, however. "Your healthcare provider cannot share data with anyone, but you can share it with whoever you want to," Bhathal said. You can get a printout of your records and hand them to someone else. You can violate your privacy rights however you want, so long as you don't make the hospital do it for you.

Educated as a geneticist himself, with a PhD from the University of California San Diego (UCSD), Bhathal has spent a career working in the pharmaceutical and medical technology industries. He started Zibdy with support from Dr. Irwin Kaufman from Rady Children's Hospital in San Diego and Dr. Sanjay Gupta from UCSD.

Bhathal got interested in the conflict between healthcare privacy and healthcare data sharing while trying to help a former college roommate who was dying with cancer. He discovered there was no easy way to record what

Really intriguing issues, David. Would have to be a heck of a privacy agreement. What happens when the company gets acquired?
Reply  |  Post Message  |  Messages List  |  Start a Board

This really got me thinking about whether healthcare privacy is too much of a sacred cow. Jeff Jarvis has a book called Public Parts, on the value of sharing vs. privacy, that I'd like to go back and read in the context of healthcare IT (I remember it's something he discussed in the context of his own illnesses).

The question of what happens when the company goes belly up applies to any cloud service, including the cloud EHRs, and can only be determined by law and regulation. I don't think we have a lack of regulation to protect the patient (although how it works in practice is not always consistent). The question here is whether we've protected ourselves in a way that makes it difficult to achieve certain benefits. The easiest work around, without changing the law, is to put the individual/consumer/patient in charge of deciding what to share. One of the big questions about that as a business plan is whether people will be motivated to do so.

BTW, I downloaded the Zibdy app but didn't get very far with it because (I'm glad to say) I'm not on any medications at the moment and didn't have much to record there. Getting my parents into the system could be interesting, but they don't even have an Internet connection or a smart phone.
Reply  |  Post Message  |  Messages List  |  Start a Board

Wow, talk about a massive breach waiting to happen.  Printing out health info and handing it to a family member  is one thing, but the creation of apps for the purpose brings all kinds of security breaches into the mix, particularly since (1) the average person has no clue as to security; (2) the great majority of apps (unless the user is tech savvy and isn't using Android) allow an app to phone home to the mother ship without notice or permission to the user.  Nothing good can come from the wholesale sharing of health info despite the best intentions of the individual who stands to make millions from it.
Reply  |  Post Message  |  Messages List  |  Start a Board

Whether he stands to make millions is still open to question, at this point. But I'm not sure I'd characterize the approach as "wholesale sharing of health data" -- it's sharing of data between people who choose to share their data. Convincing consumers that this is a good idea would be the first major challenge.
Reply  |  Post Message  |  Messages List  |  Start a Board

I did a survey of similar tools, including some that allowed you to assign tasks and help coordinate family members care at:

Zibdy is new to me, however I am sure there will be many more of these before the market shakes out years from now.
Reply  |  Post Message  |  Messages List  |  Start a Board
Editors' Choice
Hot Topics