The US Department of Health and Human Services will work with the public and private sectors to improve interoperability standards in healthcare, said Dr. Karen DeSalvo, National Coordinator for Health Information Technology, during a keynote question-and-answer session at the Crimson Clinical Advantage Summit 2014 in Orlando, Fla., on Thursday.

The Office of the National Coordinator for Health Information Technology (ONC) "has authority for governance of an interoperable exchange," said DeSalvo, who is four months into her new role at ONC. "It matters so much to me that systems have a way to speak to each other. Incentive or no, this is one of these situations where everyone's asking for it."

[Where Does It Hurt? book excerpt: How My Cousin, President George W. Bush, Almost Killed Athenahealth.]

In response to a question by host Chas Roades, chief research officer at The Advisory Board Co., which sponsored the summit, Dr. DeSalvo gave the industry an "A" for its adoption of Meaningful Use stage 1.

"I would say Meaningful Use stage 1, which is the most mature, has been very successful," she said. "The investment in infrastructure, [electronic health records], has been dramatic. I would give stage 1 an A. It's too soon for the rest. It's incomplete -- but not because the homework is late. You can turn it in any time." 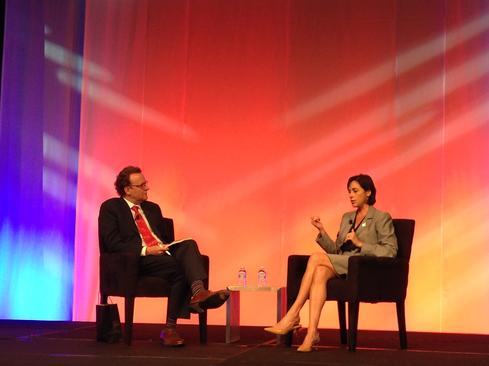 In fact, 93% of hospitals had certified EHR technology in late 2013, according to a new report by ONC. Most hospitals have the functionalities necessary to meet Meaningful Use stage 2 requirements, DeSalvo said, although HHS still needs some provider information.

"It appears the marketplace is ready in many ways. There are some areas where people are having to learn from each other, and we're trying to learn where we can facilitate."

The department is aware of the frustration surrounding isolated pools of data often created as healthcare providers adopt EHRs that don't communicate with each other, said DeSalvo, and HHS is spending a lot of time focusing on this challenge.

"The walled garden is a first step, but without the data following the patient, we're missing the opportunity as a nation of dealing with a major national priority... It's missing a chance for clinicians to really step up and do the kind of care they really want to do."

Interoperability brings with it many complex issues including governance, privacy, security, and authentication, she noted, and these are all topics under consideration -- and under ONC's jurisdiction.

Interoperability will empower providers to improve care through expanded use of analytics that deliver population health, said DeSalvo. Instead of simply treating Johnny's asthma, for example, physicians can get to the root cause of the condition by combining GPS and other data points to determine where and when the symptoms worsen.

"That is the kind of place I want to get us as a community. It means people have to let go a bit. That doctor has to admit he or she is not ultimately responsible for the success of little Johnny's asthma. That's a culture change."

In addition to a cultural shift, this also means a change in payment models, she pointed out. Healthcare already is moving toward value-based, versus fee-based, payments; but insurers, patients, and payers must decide who should foot the bill for health-tracking devices and other new technologies.

"By the way, if we fix little Johnny's asthma and living situation, he's not going to the hospital."

Wearables and ingestibles generate vast amounts of data -- and questions about ownership of this personal information. Privacy is paramount, she said.

"Even aggregated data can be de-aggregated and identified. There are real concerns for individuals. As you move into what you like on Facebook, is that health information? Is that HIPAA?"

With so many questions and so many topics under consideration, DeSalvo recognizes HHS cannot do it alone. The organization wants feedback from industry groups, she said, as it continues its quest to reduce costs and improve healthcare.

Having overseen the rebuilding of New Orleans's healthcare infrastructure and services after Hurricane Katrina's devastation, DeSalvo said little surprises her anymore. The hard work in Louisiana also underscored the importance of teamwork and the ability to meet impossible goals.

@Alison I agree with you 100%. It makes no sense to me that individuals are not granted ownership of their own health data.
Reply  |  Post Message  |  Messages List  |  Start a Board

That's one reason I'm a huge advocate for patient ownership of his/her own health record; transparency, and a simple way for patients to correct errors on their records. So far, I don't think this is the case, unfortunately, but it's going to become a really big problem in the future.
Reply  |  Post Message  |  Messages List  |  Start a Board

@Alison yes, it has great potential for much greater efficiency. But there is a downside, as well. Last year's report from the Emergency Care Research Institute (ECRI), TOP 10 HEALTH TECHNOLOGY HAZARDS FOR 2013 warned of the potential for a single error on a health record spreading before it is caught and corrected. because a single error in patient data "can have far-reaching consequences, leading to a host of downstream effects that" are challenging to detect and complicated to set right. Should a doctor act on the wrong information before it is discovered, there may be irrevocable damage.

That is not to say that people should give up on EHR, only to take some precautions. for example, the report recommended  disassociatiing any device that uploads data when switching from patient to patient. While that sounds simple enough, it may not be the default for "location-centricy" operations, which connects the data to the room rather than the individual.  In such a system, when the patient is moved, the system has to be manually updated.
Reply  |  Post Message  |  Messages List  |  Start a Board

Yes, the latest data says 93% of hospitals have some level of EMR installed. Now, that doesn't necessarily mean use is widespread, of course. Nor does it mean hospitals are fully leveraging this investment. But it's a good foundation. Physician offices have much lower adoption, unsurprisingly. Personally, I think the availability of cloud-based EHRs increases the odds of faster EMR adoption within practices; it's easier, often more affordable, and requires less internal IT knowledge.

As you say, Ariella, now hospitals have EMRs in place they're digging in to the data to try and discover new ways to reduce costs and improve care. (I'm writing a story on that later today, based on the Crimson conference I attended late last week.) Once you've invested so many resources into such a massive data repository, you want to fully leverage this amazing asset!
Reply  |  Post Message  |  Messages List  |  Start a Board

93% of hospitals? Wow, they've made pretty good progress. About a year ago I wrote about EHR adoption in NYC, something that Bloomberg encouraged. One of the things I came across was the report  Using Electronic Health Records to Improve Quality and Efficiency: The Experiences of Leading Hospitals. It points to additional benefits associated with EHR.  On a macro-level, EHRs make it possible to identify "patterns in performance data to identify problem areas, thereby facilitating quality improvement efforts and identifying opportunities for process redesign."  The EHRs also contribute to the data that can be used to investigate "questions and test hypotheses," whether they relate to general efficiency or clinical issues.
Reply  |  Post Message  |  Messages List  |  Start a Board
InformationWeek Is Getting an Upgrade!