23andMe, the personal genomics company, has been ordered by the Food and Drug Administration to halt the marketing of its $99 genetic testing service.

In a letter sent on Friday, the FDA chided the company for dragging its feet in complying with federal regulations. The agency notes that it has been working with the company since July 2009 to help it comply with applicable rules. It recounts 14 meetings, hundreds of emails, and dozens of written communications.

Despite this long history of interaction, the FDA says 23andMe has not provided any assurance that its personal genomics test has been validated analytically or clinically for its stated purpose.

[ Can patients be trusted to monitor themselves? Read Mobile Health Tech Could Reduce Doctor Visits. ]

Because of absent documentation that the tests provide accurate genetic data, the FDA fears test flaws could lead to unnecessary medical procedures or customers failing to take advisable medical actions.

"For instance, if the BRCA-related risk assessment for breast or ovarian cancer reports a false positive, it could lead a patient to undergo prophylactic surgery, chemoprevention, intensive screening, or other morbidity-inducing actions, while a false negative could result in a failure to recognize an actual risk that may exist," the FDA's letter states. 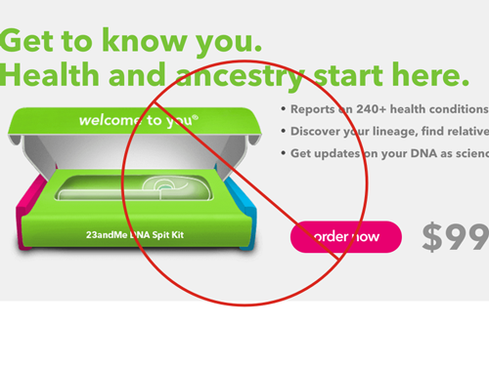 23andMe acknowledged receipt of the FDA's letter and said it intends to satisfy the agency. "We recognize that we have not met the FDA's expectations regarding timeline and communication regarding our submission," a company spokesperson said in an emailed statement. "Our relationship with the FDA is extremely important to us and we are committed to fully engaging with them to address their concerns."

The company did not immediately respond to a request to clarify whether it will fulfill orders that have been paid for but not yet processed, or whether it will delay fulfillment until the FDA's concerns have been met.

For Google cofounder Sergey Brin, one of the company's financial backers -- and the recently separated spouse of 23andMe CEO Anne Wojcicki -- this lesson might evoke a sense of deja vu: Google launched a health service of its own back in 2008, only to shut it down in 2011 for lack of interest. Nonetheless, Google is back at it; it introduced a health services company called Calico in September.

In December 2012, Wojcicki announced an effort to sell a million of 23andMe's personal genomics tests by the end of this year, backed by $50 million in new funding. Three months earlier, she reported that the company had about 180,000 customer profiles in its database.

It appears the company will fall short of its goal. In September 2013, BusinessWeek reported that 23andMe had reached 400,000 customer profiles.

Over the summer, 23andMe hired a new executive, Andy Page, a board member and former president of luxury shopping company Gilt Groupe, to assist its effort to attract more customers.

We welcome your comments on this topic on our social media channels, or [contact us directly] with questions about the site.
Comment  |
Email This  |
Print  |
RSS
More Insights
Webcasts
Hybrid Cloud: The Great Balancing Act
Optimizing App Performance in the Cloud
More Webcasts
White Papers
Why Add Security to Your Skill Set and How to Do It
Don't Let the Past Obstruct Your Zero-Trust Future
More White Papers
Reports
How Data Breaches Affect the Enterprise (2020)
DNS Network Traffic Volumes During the 2020 Pandemic
More Reports

Do you all work for the FDA? There is another perspective I'm surprised I have not seen here yet: The FDA, like so many other facets of our government, is focused on making itself bigger. It looks for every opportunity to inject itself into private business for the purpose of self growth. The 23andMe saga is a perfect example whereby the FDA saw an oportunity to make BIG government even BIGGER. 23andMe is niether selling Drugs nor Food.

If the Information sold by 23andMe does not live up to its promise, let the market dynamics play out - they would not stay in business if their product was not effective. This is how a free market society is intended to work.

The company is not giving up without a fight.

This was posted to the company blog and signed by CEO Anne Wojcicki:

23andMe was started in 2007 with the belief that consumers have the right to get access to their genetic information and that information can help them live healthier lives.

It is absolutely critical that our consumers get high quality genetic data that they can trust.   We have worked extensively with our lab partner to make sure that the results we return are accurate.  We stand behind the data that we return to customers — but we recognize that the FDA needs to be convinced of the quality of our data as well.

In 2008 we began our dialogue with the FDA. The relationship with the FDA remains critically important to 23andMe.

In July 2012 23andMe submitted its first application for FDA clearance and followed on with another submission at the end of August. We received feedback on those submissions and acknowledge that we are behind schedule with our responses.

This is new territory for both 23andMe and the FDA. This makes the regulatory process with the FDA important because the work we are doing with the agency will help lay the groundwork for what other companies in this new industry do in the future. It will also provide important reassurance to the public that the process and science behind the service meet the rigorous standards required by those entrusted with the public's safety.

I am committed to making sure that 23andMe is a trusted consumer product. I believe that genetic information can lead to healthier lives — a goal that all of us share.

We will provide updates as they become available.

Accordint to Techcrunch, Wojcicki also sent out a letter to customers, saying:

We stand behind the data that we return to customers – but we recognize that the FDA needs to be convinced of the quality of our data as well.

23andMe has been working with the FDA to navigate the correct regulatory path for direct-to-consumer genetic tests. This is new territory, not just for 23andMe, but for the FDA as well. The FDA is an important partner for 23andMe and we will be working hard to move forward with them.

I suspect the issue is the company can't sell $99 tests that have also been conducted with sufficient regulatory rigor. And $999 tests just won't sell well enough without a very clear benefit to consumers.
Reply  |  Post Message  |  Messages List  |  Start a Board

I am not sure how come this news came after Anne Wojcicki split up from Sergey Brin, on the other hand i guess manufacturers should be asked to seek FDA approval before putting dietary supplements on the market.
Reply  |  Post Message  |  Messages List  |  Start a Board

I can see how much of a risk taking one of these gene tests could be. Imagine if you did get a false positive...

It's clear that the FDA is not yet comfortable with 23andMe. They must not think that the test is accurate enough. That being said, wouldn't you get a second opinion if you did get some sort of positive result?
Reply  |  Post Message  |  Messages List  |  Start a Board

Is this game over for 23andme? Does the FDA give them any out, any way to redeem themselves?

Sounds like no genetic tests = no businesses for them

$99 for an individual genome analysis? It may be a case of you get what you pay for. The reputable testers say the price of effective testing has come down to about $1,000. Courtagen Life Sciences told me their test cost $999. If I paid $99 for such a test, I'd worry it would discover my nearest relative was a chimp.

I agree that wrong information is worse than no information. I've spoken with people who believe personalized healthcare, stemming from genomics, will be the next wave in healthcare. I wonder when we'll start to see FDA-approved versions of this.
Reply  |  Post Message  |  Messages List  |  Start a Board

Very few people other than physicians have the background to interpret genetic readouts of this type, and in fact, most non-specialist physicians probably don't, either. In an era of soaring health care costs, why open a Pandora's Box containing unnecessary testing, unnecessary worry and unnecessary expense? Sooner or later, the medical infrastructure to work with this type of data will develop, and appropriate venues for performing these tests will be established. Wrong information is worse than no information!
Reply  |  Post Message  |  Messages List  |  Start a Board