Where Healthcare.gov has failed, N.Y.'s marketplace has succeeded because of good planning, say a state official and the contractor CSC.

In contrast to the federally operated health insurance exchange, HealthCare.gov, several of the state-run exchanges, including those in California, Kentucky, Connecticut, and New York, have been introduced fairly smoothly. Through November 12, for example, 48,162 people had enrolled in health plans and 197,011 individuals had completed applications on the New York State of Health (NYSoH) website. Most of them were eligible for private plans, and other people were enrolled in Medicaid.

What has made the New York insurance marketplace so much more successful than HealthCare.gov out of the gate? The answer, unsurprisingly, has much to do with the planning and execution of the IT aspects of the rollout.

[For more on health IT planning, see Where Is Enterprise Architecture In Healthcare?]

Long before the October 1 start date, for example, N.Y. officials determined that the state's Medicaid eligibility system would have to be upgraded, noted Donna Frescatore, executive director of NYSoH, in an interview. The state hired CSC to do the upgrade, and it also contracted with the technology firm to build its exchange website and to develop interfaces with federal agencies and local health plans.

The launch of the marketplace was not troublefree, because the initial volume of visitors exceeded expectations, Frescatore said. "But within three or four days, we quadrupled the capacity and found some places where we could run the software application more efficiently." As a result, volume has not overwhelmed the site since then. Even if the number of visits increases significantly between Thanksgiving and December 15 -- the cutoff date for people to enroll in plans that begin coverage January 1 -- she is confident that the server capacity is sufficient to handle the demand.

Since the first few days of the rollout, there have been no unscheduled outages or downtime on the site, according to Chris Harmer, CSC's program manager for the New York State exchange. But NYSoH has had some problems in accessing the data hub operated by the Centers for Medicare and Medicaid Services (CMS), which includes income data from the Internal Revenue Service (IRS).

"We've had periods when some of the data in the federal hub was not available to us," noted Frescatore. "For example, last weekend, IRS data was not available to us. That means we cannot complete new applications, because we can't verify the individual's income or calculate any tax credits they're entitled to." 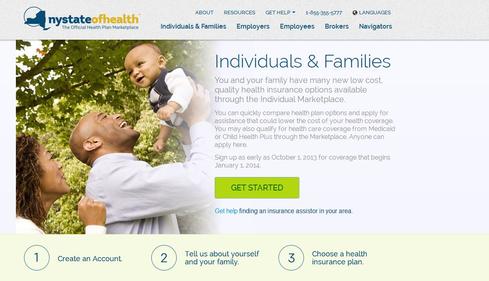 Harmer said the CMS hub was down for maintenance during the Veterans Day three-day weekend. Additionally, he said, the Social Security service in the hub is taken down every night for maintenance from 1:00 a.m. to 5:00 a.m.

The US Department of Health and Human Services (HHS) is still trying to figure out how to transmit enrollment files reliably from HealthCare.gov to the health plans in the 36 states where the federally run marketplace operates. But NYSoH officials and CSC prevented this from becoming a problem well before the site's launch.

"We worked with the plans to make sure we could send accurate transactions to them and to make sure they could receive them and apply them to their internal systems," Frescatore said. "For the most part, our health plans have already been in communication with individuals who have selected them. The individuals who chose those plans have gotten a welcome letter or have already started to get insurance cards. And soon, if they haven't already, they'll receive an invoice for their January premium."

The key to achieving this goal was planning, she noted. "We spent a lot of time on the enrollment file itself. We spent a lot of one-on-one time with each of the plans' technical teams, making sure they were ready to accept the transactions."

Harmer explained that there's a common interface for sending enrollment transactions in the 834 format specified by the HIPAA 5010 transaction set. There's also a standard protocol for downloading the files. But not all health plans had software that could do this correctly before the launch of NYSoH.

"In some cases where people had a different piece of software we worked individually with them," he said. "But generally, they've all been able to adapt. We put a lot of time into planning and testing. That's one reason why we've fewer issues with them having to adapt their technology."

The state and CSC keep trying to improve the website, using feedback from the public that's collected through call centers and social media, Frescatore said. In addition, NYSoH is using private insurance brokers to help enroll people. It plans to run TV and print ads to increase awareness of the website.

CSC received some bad press a couple of years ago because of problems with the rollout of an electronic health record system to UK physicians and hospitals through the National Health Service (NHS). But since the technology firm recontracted with NHS in August 2012, things have gone more smoothly, according to CSC.

"The new agreement does not contain any changes to budget or scope, but does provide NHS hospital trusts that choose to take the system with greater flexibility, while helping to reduce administrative complexity," the company said in a statement. "Three hospital trusts are already successfully running their day-to-day operations using the Lorenzo electronic patient record system, and six additional trusts so far have selected the system since August 2012."

There's no such thing as perfection when it comes to software applications, but organizations should make every effort to ensure that their developers do everything in their power to get as close as possible. This Dark Reading report, Integrating Vulnerability Management Into the Application Development Process, examines the challenges of finding and remediating bugs in applications that are growing in complexity and number, and recommends tools and best practices for weaving vulnerability management into the development process from the very beginning. (Free registration required.)

Even the best planning can't eliminate errors in execution and unintended consequences.  The state exchanges by definition should have been simpler to design and execute than a federal exchange, which has to work with 36 states worth of health insurance rules. That NY ran into the its share of problems, based on the social media chatter is a reminder that testing is a fundamental, and under-appreciated part, of launching these systems. Haven't we learned that lesson from all big software companies' beta releases?
Reply  |  Post Message  |  Messages List  |  Start a Board

Aw crap, Ken, you caught me confusing my 3-letter acronyms. Hasn't CGI also been involved in some state projects, or do I have that wrong, too?
Reply  |  Post Message  |  Messages List  |  Start a Board

I'm not defending the botched federal rollout, but the scale of the federal project was much larger and more complex than any of the individual state marketplaces. That said, from what I've read, the IT teams certainly did not appear to play a role as senior partner int the planning process. Looks like the classic communicaiton problem where the business and tech teams were not talking to each other.
Reply  |  Post Message  |  Messages List  |  Start a Board

Given that another division of CSC was heavily involved in the federal rollout, why were the results so different here?
Reply  |  Post Message  |  Messages List  |  Start a Board

It seems the difference between success and failure can be attributed to this: "We put a lot of time into planning and testing. That's one reason why we've fewer issues with them having to adapt their technology."
Reply  |  Post Message  |  Messages List  |  Start a Board
InformationWeek Is Getting an Upgrade!