50%
Tweet
Industry organizations work to clear up the confusion that still surrounds telemedicine.

Two industry organizations recently drafted guidelines and policies to clarify murky rules surrounding telemedicine, demonstrating the struggle many providers continue to have with this approach to care.

FSMB's policy is advisory, meaning state boards can fully adopt it, modify it, or implement their own, says Dr. Humayun Chaudhry, president and CEO, in an interview.

FSMB instituted its first telemedicine guidelines in 2002. That document included the definition of a website, something FSMB removed in its latest version, Dr. Chaudhry notes. FSMB did not, however, need to update the meaning of telemedicine.

"The verbiage was perfect," he says. "We reaffirmed the original definition of telemedicine and didn't make a single change."

FSMB defines telemedicine as "the practice of medicine using electronic communication, information technology, or other means of interaction between a licensee in one location and a patient in another location with or without an intervening healthcare provider." 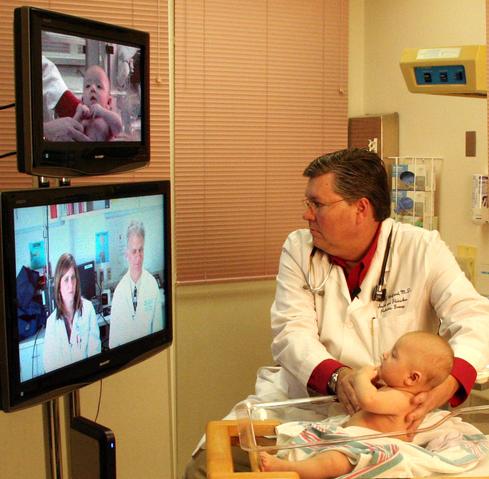 The organization specifies that telemedicine typically isn't based solely on phone calls, emails, or instant messages, and that physicians should conduct these sessions via secure videoconferencing or store and forward technology. However, this doesn't take into account that for decades many physicians have provided afterhours care via phone, and some of the country's largest medical systems use secure email to communicate with patients, says Jonathan Linkous, CEO of the ATA, referring to a list of suggestions ATA submitted to FSMB. At least three states pay for telephone consultations under their Medicaid plans, he adds.

"Overall, we agree with the majority of it," he says. "In medicine, the first thing you're taught is 'first do no harm.' And that's what I'd say a medical board first thinks of as policy."

Telemedicine is complex but FSMB's policy should help state boards simplify the process, Roy Schoenberg, CEO of American Well, says in an interview. "Importantly, they do the heavy lifting of framing the principals of operation that must be adhered to in order to preserve patient safety and quality of care. Balancing the immense promise of this technology with the legitimate concerns of its abuse has driven many boards, even enthusiastic ones, to adhere to older rules that prevented its use," he says.

"The guidelines offer the detailed framework needed to revise those dated rules. I expect many boards to refine the guidelines to meet their own perspective and culture but, as a whole, healthcare will embrace telehealth."

Adding telemedicine tools to the ICU can enhance patient safety by relieving so-called "beep fatigue," when staff become inured to real alerts because of the constant noise from the many machines, says Nathaniel Lacktman, a partner in the global law firm Foley & Lardner.

"If you have an electronic ICU, those people on the floor don't necessarily have to be in the room. They can be in the rooms of people who need care most," he says. "They can observe, they can consult, and they can advise. It steps up the staffing of an ICU. Their footprint can expand to help so many more patients, which is fantastic. That's not eICU specifically. That's telehealth."

Lacktman, who helps clients set up telemedicine arrangements, finds lots of confusion surrounding this opportunity, because so many laws and organizations are involved. In addition to state and federal regulations, hospitals must work with groups, including doctor and nurse organizations, insurers, and Medicare, ATA's Linkous adds.

Whether state boards opt to use FSMB's policy or not, the advent of the new guidelines should prompt state and healthcare leaders to discuss telemedicine, says Lacktman. "It's very heartening to see all the focused attention on telemedicine," he says. "Obviously it's not a different specialty practice, but it is one of the most exciting ways medicine is changing -- both for costs and improvement in quality."

From what I can tell, the two biggest factors holding back telehealth adoption include FUD and fear of competition. In the case of FUD, some folk point to the very few bad apples that push real pills to addicts or sell fake pills to addicts. In both cases, those are crimes and are happening today, with or without telemedicine. They also occur in the world of bricks and mortars medical practices, unfortunately. You'd think some smart healthcare professionals, in tandem with some smart lawyers, could figure out a way to create sensible rules -- ie, preventing US telemedicine providers to see US patients from outside the country -- to ensure practitioners and patients would be under US law enforcement's sphere of influence if wrongdoing occurs. As to competition, from the handful of doctors I've spoken to who work for telehealthcare organizations, they like this alternative career opportunity. Facing additional competition is tough; it really is. But there is room for traditional providers to work with telehealth if they don't want to work against it.
Reply  |  Post Message  |  Messages List  |  Start a Board
Editors' Choice
Hot Topics