Someone recently forwarded Doximity CEO Jeff Tangney an email that went out to the staff at Massachusetts General Hospital. The email discussed Doximity's professional social network for doctors, describing the potential uses of the network and its promise of upholding HIPAA standards for healthcare security. It also included a phrase that strikes him as funny: "The service appears to be reputable."

Reading it aloud during a phone interview, Tangney chuckled. "For healthcare, that's a rousing endorsement."

There are many strategies for doctors to use social media or tap social networks for medical education and research. However, doctors are a justifiably conservative bunch.

"Physicians have a lot of privacy constraints in their lives," Tangney explained. "There's a certain distance they need to maintain from patients -- both legally and for their own sanity. Even a friend relationship [on Facebook] can be considered a privacy violation." 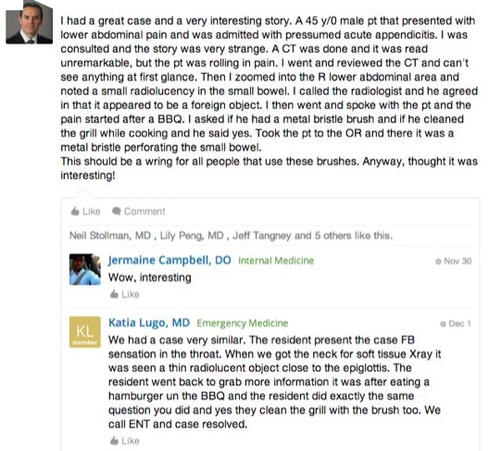 Excerpt from a discussion on Doximity

Founded in 2010, Doximity aims to be the professional social network doctors can use without worrying that they will get in trouble. It's more like LinkedIn than Facebook, both in professional focus and the kind of relationships and communications it enables, and membership is currently limited to doctors only, as validated by DEA number. The other well-known social network for doctors, Sermo, also limits its membership to US-based doctors, although Tangney claims his firm's identity validation process is more rigorous. Doctors who have used both services say they have very different styles: Sermo focuses more on discussion forums, while Doximity emphasizes professional networking and private messaging. Sermo also allows anonymous postings; Doximity insists on real names.

Tangney has a history of creating interactive services for physicians. Prior to starting Doximity, he was one of the cofounders of Epocrates, a maker of medical reference applications that in recent years has become best known for its mobile apps. Tangney served as president and COO from 1999 to 2009. Epocrates was acquired by Athenahealth in January 2013.

Doximity claims 40% of US physicians are active members, and the value of the network becomes greater as usage has become more pervasive. In its earliest incarnation, the service was a simple directory physicians could use to look up each other's phone number to reach out for a consultation. "We still have a third of our doctors who will share their cell number selectively with other doctors," Tangney said.

Later, the service added a private HIPAA-compliant email service. "That didn't take off at first because we didn't have enough coverage," Tangney said. To make it more useful, Doximity added a secure Internet faxing capability -- faxing of health documents and medical images is still common in medicine because of limited interoperability between Electronic Health Records (EHR) systems. But by the end of 2012, Doximity usage had gained momentum -- at least in some markets -- and the private messaging service began to take off. Tangney has found when the majority of the physicians affiliated with a particular hospital become members, usage really starts to explode.

On the other hand, he added, some of Doximity's most committed users are rural doctors in places like Alaska, reaching out for remote consultations.

Although Doximity does offer discussion forums, about 90% of the service's traffic comprises one-to-one messages rather than group discussions. Strictly speaking, Tangney and his staff don't know what's going on in those private messages. "The easiest way to make [Doximity] HIPAA-compliant was to make it so we can't see it," he explained. "But from talking to our doctors, a lot of that discussion is around patient collaboration." A doctor who specializes in colonoscopies, for example, might use the service to send colleagues the results as a professional courtesy, saving him from spending hours every night reporting the results by phone. "That one-to-one messaging can cut out a lot of phone tag," Tangney noted.

Doximity does also offer support for the Direct Protocol, a point-to-point method of exchanging records between EHRs, as opposed to using a centralized Health Information Exchange. However, that capability is not used much, according to Tangney. "The reality is HIE is a bit of a unicorn -- it doesn't exist in a lot of places -- and even where it does, there's a place for that professional courtesy, that individual follow-up," he explained. "There's a subtle line between personal follow-up and 'it's in the database.'"

Discussion forum activity tends to be highly professionally focused, whether on the business challenges of running a successful practice or on getting help with a tough diagnosis. In one notable case, a puzzled emergency physician shared a radiologic image that appeared to show a tangle of wires in the patient's stomach. Another physician correctly guessed that the patient had eaten a grilled hamburger recently -- the wires had likely come loose from a grill brush -- and provided advice on how to remove them safely. The importance of that story, Tangney explained, is that such incidents are rare enough that they wouldn't happen at the average hospital, and yet by consulting a broad enough network of physicians, the emergency physician was able to get help.

Doctors also use their profiles to promote themselves and their areas of expertise, or to find colleagues with a specific expertise for patient referrals. Doctors who have published medical research can add those papers to their profiles and receive alerts when their papers get an academic citation in another publication.

Like LinkedIn, Doximity makes money by providing recruiter accounts to hospital personnel and medical recruiters, who can search its database of talent but cannot access any doctors-only content. With temporary access to an account of this type, I was able to look up and confirm that a few doctors I know were in the directory. I followed up with one, who said he uses Doximity occasionally to look up colleagues if he doesn't have their phone number, but he hasn't yet used the service for clinical consultations.

Because MDs aren't necessarily the only ones who need access to some Doximity services, such as private messaging, the service will eventually expand to offer accounts to physicians, nurses, nurse practitioners, and office staff, but it will do so in a very deliberate fashion, Tangney said. There will be some "circles of trust" scheme to keep doctor-to-doctor communication private while also allowing them to delegate some responsibilities to other medical team members.

Through a social sign-on capability using the same underlying OAuth technology as Facebook Connect, Doximity users can sign into partner applications such as patient portals. Might Doximity eventually offer its own service connecting doctors with patients?

"There's lot of things we could be down the road," Tangney mused. "Who knows what we will be? For now, we want to build a really useful directory for doctors and let them message each other. That's going really well."

David F. Carr oversees InformationWeek's coverage of government and healthcare IT. He previously led coverage of social business and education technologies and continues to contribute in those areas. He is the editor of Social Collaboration for Dummies (Wiley, Oct. 2013) and ... View Full Bio
We welcome your comments on this topic on our social media channels, or [contact us directly] with questions about the site.
Comment  |
Email This  |
Print  |
RSS
More Insights
Webcasts
The Experts Guide to Ransomware Response
Multi-Cloud Data Management for Modern Applications
More Webcasts
White Papers
Annual Cybercrime Report - Cybersecurity Ventures
The InformationWeek 2021 State of ITOps and SecOps Report
More White Papers
Reports
Enabling Enterprise Resiliency Through Cyberthreat Detection
The State of Endpoint Security
More Reports

Sounds like one characteristic of this environment is how transactional, as opposed to purely social, it is -- sort of like LinkedIn without the frivolity. Essential to its success will be positioning itself as a productive tool for doctors to connect with each other and consult or otherwise do business in a streamlined way. Still, it would be healthy to also see more open discussion -- open, within a circle of peers that is -- on solving complex cases and improving the business and practice of medicine.

What will it take to make social-style discussion flourish here?
Reply  |  Post Message  |  Messages List  |  Start a Board
InformationWeek Is Getting an Upgrade!