Bad news for healthcare community: New study shows retailers like Target and eBay are more secure than many healthcare organizations.

Healthcare organizations are rife with insecurity, and it's only a question of when a Target-like attack puts millions of patient health information (PHI) files on the black market, a new study suggests.

A large-scale attack within the healthcare industry could put patients' safety and lives at stake, cautioned Stephen Boyer, CTO of security rating firm BitSight Technology, in an interview. Despite increasing awareness about these risks, healthcare organizations far behind their peers in other vertical markets, Boyer said, citing a BitSight study titled Will Healthcare Be the Next Retail?, released May 28.

Of four industries the study analyzed, healthcare saw the largest surge in attacks and was slowest to respond, taking more than five days to remediate security issues. By comparison, finance took about 3.5 days, and retail and utilities combatted issues within approximately four days. Some healthcare organizations led the market, using best practices and adequate resources, but as a sector, healthcare is weaker than others.

According to Boyer, however, that may be improving. "I don't know of a major breach of healthcare records, but stay tuned. I know that certainly there's worry about privacy. I see more transparency going into the process and I think that's going to put the right incentives in place," he said. "The Target breach was just a watershed moment in the industry. It's changing conversations everywhere we go."

[Are you prepared for insider threats? Read Colleagues In Cuffs: When Employees Steal Patient Records.]

For its report, BitSight analyzed the security performance of Standard & Poor 500 firms based on data such as communication with a botnet, malware distribution, or spam propagation, and determined that last year, 82% of organizations suffered a security compromise. Within the finance, utilities, retail, and healthcare and pharmaceutical industries, healthcare showed the worst performance overall, according to the study. 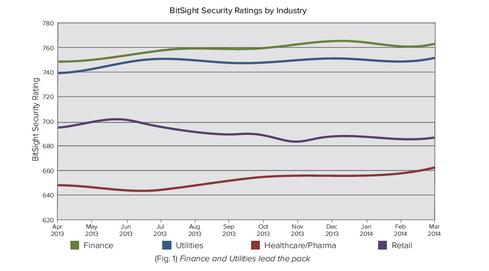 (Source: BitSight Technology, "Will Healthcare Be the Next Retail?")

PHI has real value to thieves. On the black market, Boyer said, a patient's electronic medical record sells for about $20; by comparison, credit card data sells for approximately $1 per card. Some patients could be embarrassed if their health records become public, opening them to blackmail or other victimization. Thieves also sell PHI to those without insurance.

Unlike finance firms that have secured money since their earliest days, healthcare organizations are typically comparatively new to the world of data protection. Their mission is to deliver care, not safeguard bytes of data, Boyer explained, so awareness, cognition of the full range of insecurities, and resources are not available across the industry.

The Department of Health and Human Services tackled the issue with a stick: Bigger fines for breached organizations. Earlier this month, for instance, HHS Office for Civil Rights (OCR) settled a $4.8 million HIPAA breach case with New York and Presbyterian Hospital and Columbia University. That scrutiny may only increase in light of retailers' recent breaches, according to Paul Trulove, VP of products at SailPoint.

"On the heels of such well-known data breaches at Target and even [more recent] news of the cyberattack on eBay, auditors are going to put even more scrutiny on healthcare organizations as the data they house is even more valuable than consumer data," he said in an interview.

"I will never say never, but the healthcare industry has seen a disproportionately low instance of cyberattacks, and rather a higher proportion of accidental data loss through well-intentioned but risky user behaviors on the device or lost devices. A major reason for a low instance of cyberattacks is because stringent HIPAA guidelines are a core part of the data security and compliance strategy of all healthcare organizations in the United States," Raggo said. "That said, cyberattacks are increasing, as are the number of attack vectors organizations need to protect."

Likewise, Boyer added, older healthcare systems may not include the latest technological safeguards. In fact, he pointed out, one healthcare official recently received an implementation pitch that included computers running Windows XP, an operating system Microsoft no longer supports with security upgrades.

"I know there are some key conversations going on now on things that will improve [healthcare security]," he said. "I'm less optimistic they'll happen quickly. This is not a super agile environment inside hospitals and health organizations. It's going to be difficult to turn around."

If a big breach occurs within healthcare, Boyer warned, patients could react by switching providers or insurers, or being less forthcoming with physicians -- even to the detriment of their health.

Alison Diana is an experienced technology, business and broadband editor and reporter. She has covered topics from artificial intelligence and smart homes to satellites and fiber optic cable, diversity and bullying in the workplace to measuring ROI and customer experience. An ... View Full Bio
We welcome your comments on this topic on our social media channels, or [contact us directly] with questions about the site.
Comment  |
Email This  |
Print  |
RSS
More Insights
Webcasts
Building Asset Management into Your Enterprise Security Strategy
Advancing the Hybrid Cloud & App Modernization Journey with IBM
More Webcasts
White Papers
Gartner: Hype Cycle for Security Operations
Addressing Complexity and Expertise in Application Security Testing
More White Papers
Reports
Key Strategies for Managing New Risks in Cybersecurity
The Malware Threat Landscape
More Reports

That's really great to hear, @SarahBeene. You almost wish there was a Good Housekeeping seal for practices! Sounds as though you'd be on the list!
Reply  |  Post Message  |  Messages List  |  Start a Board

You're exactly right: PHI will be hacked and the fact that the government is moving toward a centarlized database of healthcare records and the possible creation of a healthcare ID number should send alarm bells off. When you have studies demonstrating that healthcare, as an industry, is far less secure than the notably insecure retail market, we should be extremely worried. I don't think we're being alarmist when we say this will have much more dire implications than financial fraud.
Reply  |  Post Message  |  Messages List  |  Start a Board

You raise great points, @AmandaInMotion, in that perhaps finance isn't a great bastion of security; it's just less bad than the other verticals in the study. After all, banks get hacked and as you say, the NSA has its fingers in just about every pie.

Personally, I'm concerned about healthcare data and lack of privacy. Almost every day I get a press release touting the use of "anonymized" data by one company, research firm, or university -- and that's data coming from doctors, hospitals, insurance firms, or government. In other words, it's patient data but I don't recall ever agreeing (or disagreeing) to allowing my data to be used in this way. Nor do I know anything about the standards used or not used or what happens when some of these companies go out of business. When my daughter started middle school, I discovered there's a central database where schools can look up kids' vaccinations. The IRS oversees health insurance coverage. And companies troll social media for mentions of individuals' medical complaints, treatments, and symptoms.
Reply  |  Post Message  |  Messages List  |  Start a Board

Do you think healthcare organizations will become more likely to try and recruit security professionals from finance? Or is healthcare too specialized, their budgets too tight (compared with finance) for this approach to work?
Reply  |  Post Message  |  Messages List  |  Start a Board

@Jon, I believe you're correct about those stolen CC numbers. This report didn't get into how healthcare data is being stolen. Information from HHS seems to indicate most is taken due to lack of encryption when hardware -- laptops, smartphones, etc. -- get stolen or lost. But this report suggests healthcare organizations WILL be attacked in a much more organized fashion. And if/when that happens, the general lack of preparedness will lead to a huge loss of personal health information, much bigger than anything we have yet seen from the world of retail.
Reply  |  Post Message  |  Messages List  |  Start a Board

How can vendors make their systems more secure, @moarsauce123? Do you think they should automatically encrypt all data, for example? Do you know of any vendors who are doing a better job than others?
Reply  |  Post Message  |  Messages List  |  Start a Board

You are SO right, @Chris. Whenever I see reports or press releases on healthcare breaches or take a spin through HHS' Wall of Shame, I am (unsurprised but) stunned at the high percentage of breaches due to employee negligence, such as losing an unencrypted laptop. I don't know if it's laziness, lack of education, overly complex procedures that spawn workarounds, or a combination of factors that lead to these commonplace lapses but it's very disheartening. I think IT and security pros can help their organizations improve security by showing the direct result of lapses: Huge penalties and loss of public trust (and patients?) once these occur. Plus design security solutions that are as user-friendly as possible, while still safeguarding data. Tough but feasible.
Reply  |  Post Message  |  Messages List  |  Start a Board

I agree with you that security is NOT what healthcare providers typically are good at. It's one reason I, personally, think many should seriously consider cloud as an option. Now, that doesn't mean rushing out and choosing any old cloud provider. It requires due diligence, a strong SLA, a deep dive into a cloud service provider's security (physical and cyber), as well as a long look at the company's financial resources. But partnering with a firm that solely provides data services and security can make a lot of sense for healthcare organizations, especially those without the resources to hire the right number and type of internal staff and buy adequate tech of their own.
Reply  |  Post Message  |  Messages List  |  Start a Board

You're so right. Many people like the convenience of storing their data, including credit card numbers. And I've seen studies that show the majority of people don't even use a simple four-digit password on their smartphones, leaving them wide open to theft.
Reply  |  Post Message  |  Messages List  |  Start a Board

An interesting side point: The company really expected Utilities to perform worse than other verticals. As you can see from the chart (and from the full report, if you access it), that was far from true! Good news for our grid. Bad news for retail and healthcare.
Reply  |  Post Message  |  Messages List  |  Start a Board
Page 1 / 2   >   >>
InformationWeek Is Getting an Upgrade!