How The Enterprise 2.0 Managerial Model Was Born - InformationWeek

In this first of a three-part series, we explore the evolution of Management For Opportunity. How did "manager" become a dirty word?

New technological eras invariably create new managerial eras. Enterprise 2.0 is no different. In this three-part series, I will argue that E 2.0 organizational technology leads to a management model I will call "Management For Opportunity," a model that exposes managers to market risks in unprecedented ways. This model is contrary to the popular emerging idea that managers (especially the much hated middle managers) will become entirely obsolete.

But to get to this vision, we need to situate E 2.0 management and technology ideas within the evolutionary history of corporations.

I'll start the story around 1954 rather than go all the way back to 1600. If you're interested in earlier eras of management, check out my posts "A Brief History of the Corporation: 1600-2100" and "Hall's Law: The Nineteenth Century Prequel to Moore's Law".

Let's start by trying to characterize the job of the manager in the E 2.0 world. I assert that this job is to manage for opportunity (MFO), which is fundamentally a risk management role that requires E 2.0 tools to fulfill. It's the newest layer of the functional organization of the evolving managerial mind, which I visualize like so: 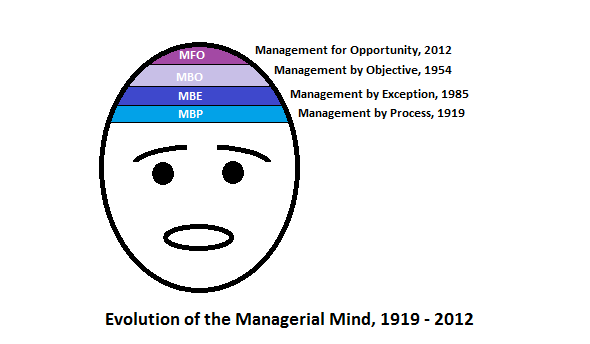 I've tried to capture higher- and lower-level functions in a dependency stack. You need the lower layers before you can install the higher layers. There's a chronological anomaly in that the second layer developed after the third one, but that was due to some historical peculiarities.

Let's start by tracing the evolution of the managerial mind.

The Evolution Of The Manager

Skipping lightly over a couple of centuries of early evolution, the story gets interesting with Peter Drucker, at a time when the default management culture was a layer of owner-executives on top of what you could call glorified shop-floor supervisors, whose job was to steward well-defined processes to meet objectives set by owner-managers. Call this Management By Process, or MBP.

In 1954, in a world where people management was still synonymous with MBP but operations were growing more complex, large-scale, and specialized by the year, Drucker offered an abstract principle for managing the emerging breed of information workers differently: Management By Objectives (MBO).

It was a revolutionary idea: Employees should participate in setting and monitoring their own performance goals. It was a natural consequence of selling complex products and services in a growing global market. In a way, it was a return to the high autonomy enjoyed by managers in the sprawling, flat-hierarchy railroad empires but had been slowly eroded in newer vertically integrated industries such as oil and steel.

Senior managers can see all of that data but will they? Do they have time to? It seems to me that having the data more readily and effectively doesn't change the fact that it takes time and other resources to analyze it and act on it.

Leader is the universal term for manager, despite most leaders in middle management not having the authority to change course or do anything other than control. I think the terminology has changed, but the system is still: Senior executives set the strategy, middle management layers control, and first line executes. The largest disconnect I see is that all of those middle management layers are no longer required with the advances in technology. Senior management can be provided with real time, automated dashboards of project or KPI performance. They can use new communication technologies, e.g. e-mail, to communicate directly with the people executing the strategy. As people are managed by objective and there is no need for the distribution of information downward or the manual collection of reports upward, the middle tiers are really not necessary.
Reply  |  Post Message  |  Messages List  |  Start a Board

I always called it "Industrial Age Thinking", management (that I've ever worked for) has not caught on to "Information Age Thinking", they want us to record how long it takes to write a functional block of code with the insane idea that they can use that to estimate how long it is going to take to write a different block of code and draw up schedules based on that.
Reply  |  Post Message  |  Messages List  |  Start a Board
Editors' Choice
Hot Topics