How-To IT Career Guide: 7 Critical Strategies, From Getting Started To Semiretiring - InformationWeek

Driven by our salary survey data, a look at make-or-break moments in a career.
Semi-retire As A Consultant
There's a demand, but be ready to sell your skills.

A lot of IT veterans -- from CIOs to technical specialists--have in the back of their minds a plan to semiretire and "do some consulting on the side."

There's a market for such skills and knowledge. But those who go in had better be prepared to be their own salesperson. "You have to put enormous energy into marketing yourself--far more than one does as part of an internal IT organization," says James Hatch, who's been doing part-time consulting since retiring as CIO of the packaging company Pactiv. Hatch describes it as a "constant, ongoing networking task." 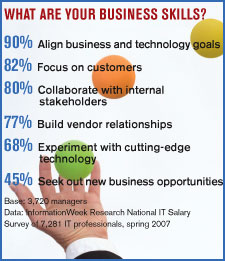 Image Gallery:
What IT Pros Earn:
Charts From Our Salary Survey
The other option is to hand that sales job over to a staffing company. That's what Mike Biela, a 60-year-old, 25-year IT veteran is doing. His previous full-time job was as director of applications development for a steel company. About two years ago, that steel manufacturer outsourced IT operations to another company: Hudson. Biela stayed on for about a year during the transition, then left, spending six months mostly baby-sitting grandchildren.

Then Hudson called, asking if he would like to work on a project that included a sales order management system for another steel company. "That was the best move I ever made," he says. He travels from his Pittsburgh home to Cleveland weekly, putting in 40 hours over four or five days each week. He makes 10% more than on his last job.

Gigs requiring less than 40 hours a week are out there, says Dan Cobb, a VP at IT outsourcing and staffing company Yoh. "If you don't want to work full time, be clear about when you can work," he says. And there are opportunities for specialists to semiretire from the tech track, Cobb says.

In fact, the more concrete people can be about what they're selling, the better. While former senior-level experience is valuable, there's a big demand for project managers who can train and lead other professionals on a team, says Tim Bosse, a Hudson VP.

Hatch has similar advice, suggesting the marketing effort is easier the more you "productize" your approach, rather than focusing on broad, general management capabilities.

One big risk: getting stale. In semiretirement, the same advice you've probably given up-and-comers applies to you: Keep up with the latest tech trends, read, take classes, do whatever's needed to keep your skills and knowledge current.

Then, be ready to sell what you know.