Tesco is among the retailers now experimenting with the use of robots to deliver orders to customers. Here's a closer look.

We have all heard the discussions of drone delivery and driverless cars permeating our cities, now automated delivery has become a reality in London. Tesco, Britain's largest supermarket retailer has successfully tested robotic delivery of groceries in central London.

The robot developed by Starship Technologies is capable of delivering less than 20 grocery items in under an hour within a three-mile radius of a Tesco store. The robots can navigate streets and pedestrians to get to their destination and notify the buyer they are at the door, via an app on their phone. The units are temperature controlled and provide anti-theft capabilities. Each robot is monitored from the Tesco delivery center, and the buyer can monitor the progress of their order from their phone. Currently, the robot is accompanied by a human handler to help it navigate traffic signals and cross the street.

This solution provides a low-cost, fast, and simple alternative to traditional grocery delivery for consumers, especially in cities where purchases tend to be smaller because of limited storage space. The robot will not need a parking space or a licensed driver and many of the other factors that add cost to a traditional human delivery of groceries. Tesco is trying to compete with not only its traditional grocery competitors, but with Amazon that is expanding across the UK. Amazon is testing same-day grocery delivery and drone delivery in Cheshire, England. Another British grocer, Ocado is testing driverless grocery delivery vans and plans to roll out the delivery service later this year.

The Tesco robot can face challenges, it is limited to areas where extreme weather is not an issue, and the robots currently need handlers to cross city streets. However, the tests that Tesco has conducted in London have been largely successful from April 2017 through June 2017, and the company plans to offer the delivery option in a limited test. 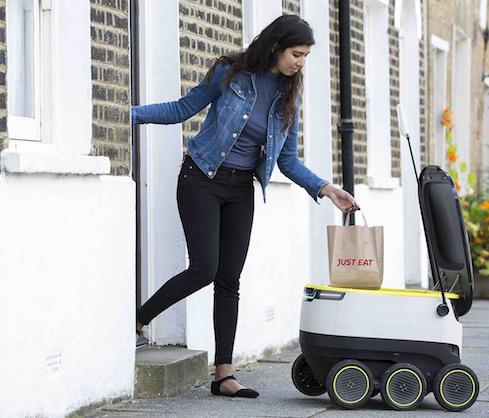 This robot solution removes many of the safety concerns associated with flying drones, but it could still present the company with challenges if the robot malfunctions in traffic, cause an unaware pedestrian to trip, or becomes the victim of pranksters. The robots are equipped with security, and cameras and are monitored from the stores from which they are dispatched. Today, the robot has a handler that can address challenges as it makes its way to its destination, but if the handler disappears the robot could become much more vulnerable.

Critics are already citing robots as the source of job loss, taking jobs from humans who would deliver groceries. The small delivery focus of the Tesco robot, however, supplements many of the traditional grocery delivery options where consumers often place bigger orders to offset the delivery cost. Getting a small number of groceries by robot could help Tesco capture some of the market that currently goes to convenience stores, increasing its overall bottom line. Large deliveries would still need humans and trucks, as are used today.