SEARCH
A minimum of 3 characters are required to be typed in the search bar in order to perform a search.
Announcements
Report
IT Enterprise Dashboard: This interactive data tool enables access to global research on IT budgets, business challenges
Event
Get in-depth insights & analysis from experts on all aspects of communications, collaboration, & networking technologies
Event
Data Center World is the leading global conference for data center facilities and IT infrastructure professionals.
Report
Find out what you need to know so that you can plan your next career steps and maximize your salary.
PreviousNext
Information Management
Slideshow 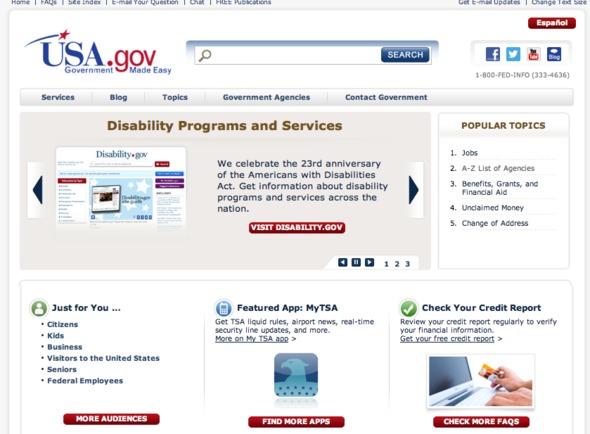 Building a 21st century, technologically enhanced government has been on President Obama's priority list since his first term in office. In theory, this would give Americans access to high-quality digital government information and services. In reality, the transition hasn't been easy. But there are more than a few examples where government agencies are headed in the right direction.

"As anyone knows, dealing with the federal government is not always high-technology and it's not always user-friendly. So over the past four-and-a-half years, we've worked diligently to change that," Obama said earlier this month when he announced his management agenda. The vision, the president said, is to "use technology to allow more citizens to participate in their democracy, and bring a government built largely in the 20th century into the 21st century."

That's not a new concept. What is now known as USA.gov, aimed at providing the public with a single portal to find government information and services, was launched in September 2000, during the Clinton administration. Now managed by the U.S. General Services Administration's Office of Citizen Services and Innovative Technologies, the website has become a powerful search platform designed to help citizens on the front end. On the back end, it also provides tools to agencies to dynamically pull in updated information.

However, Obama's second-term technology mission places renewed emphasis on giving industry and the public access to the government's treasure trove of data. It also is building on its initial success bringing in private-sector expertise to help the government improve its services. With new Office of Management and Budget (OMB) director Sylvia Burwell leading the effort, the White House is tapping into its talent pool of innovators and entrepreneurs from the private sector, under the Presidential Innovation Fellows program, to advance federal agencies to the digital age.

Agencies have been feeling the pressure since the White House introduced the Digital Government Strategy in May 2012. The strategy's main goal is to make federal information and services available to the public "anytime, anywhere, on any device." It also laid out 29 action items that needed to be completed by May 2013. Virtually all of the milestone goals have been met, although many of the initiatives are incorporated in agency IT plans.

The objectives for each agency included making "high-value data" from at least two major IT systems available through Web APIs; establishing a governance structure for developing and delivering digital services; and implementing performance and customer-satisfaction measures on .gov websites.

In an update posted on the White House blog on May 23, federal CTO Todd Park and federal CIO Steve VanRoekel said in the 12 months since the launch of the Digital Government Strategy, agencies have released hundreds of datasets via application programming interfaces (APIs), which developers can use to build mobile apps. Releasing previously unavailable government data is at the forefront of the Open Data Policy, which requires that data generated by the government be made available to the public in open, machine-readable formats. The policy, which OMB and the Office of Science and Technology Policy (OSTP) unveiled in early May, requires agencies to create an internal index of their data, make a public list of their public data, and list all data that can be made public.

Datasets generated by the federal government are now publicly available on Data.gov, a tool that anyone can use to find and download metadata for creative purposes, such as developing Web apps. The government is reaching out to Americans in ways it hasn't in the past, with initiatives such as HealthCare.gov and MyUSA, which is working on a "platform that provides trusted authentication and personalized services, as well as a more simplified and unified experience for interactions with government in general."