SEARCH
A minimum of 3 characters are required to be typed in the search bar in order to perform a search.
Announcements
Alert
Got some free time? Grow your knowledge from the comfort of your computer for FREE!
Alert
Are you looking to stay on top of IT trends? Check out our FREE webinars and virtual events!
Alert
Planning for 2023? Be sure to check out our upcoming in-person events!
Report
How does your salary stack up? 2022 IT Salary Survey Results Revealed
PreviousNext
Information Management
3 MIN READ
Feature

Here a guide to performance management metrics will help your organization act in pursuit of supply chain objectives.
InformationWeek Staff
Contributor
June 25, 2004
Here's a more subtle example. Suppose you're comparing two suppliers on their ability to deliver materials quickly. Supplier A requires an average of 17 days to fill its orders, whereas Supplier B requires 19 days on average, so Supplier A is obviously the better choice. But the actual measurements underlying these averages tell a different story (see Figure 4): A is much less consistent in its delivery times than B, with lead times as little as nine days and as long as 25 days. Early deliveries cause you to hold inventory longer than necessary, and late deliveries require you to increase inventory levels to avoid stockouts. So, any deviation from the requested delivery date requires you to hold more inventory. When you take these holding costs into account, you find that consistency is more important than absolute speed, and that makes Supplier B the better choice. 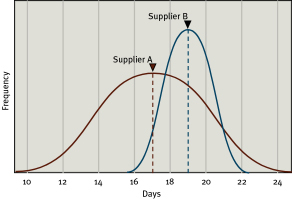 These examples show the importance of examining the entire distribution of measurements to understand what's actually going on in your business. Of course, poring over graphs of data is a rather tedious process, and you don't want to do that for every set of results. But statisticians solved this problem long ago. Just as statistics exist to represent the average value of a set of measures, other statistics can represent variation from that average.

These examples illustrate the importance of analyzing the variability in your measurements, but they also illustrate a deeper insight: Variability is bad for business. Despite the long-standing focus on average values, variation around the average is often the real killer in a supply chain. Variation almost always increases total cost, and even minor deviations in the normal flow of goods cascade down the chain in a self-amplifying pattern know as the bullwhip effect, a phenomenon that inflicts a great deal of needless pain.5

In many situations where time is of the essence, it's actually better to increase the average value of an interval, if necessary, in order to reduce its variability. Consider, for example, the supply chains that serve JIT production facilities, in which small shipments of materials arrive on a frequent, periodic basis. In these environments, suppliers are often given a 15-minute window in which to deliver their goods, and they're penalized for being too early as well as too late. When a producer enjoys this level of reliability in its suppliers, the conventional measure of fulfillment time becomes much less important.

In short, don't focus too tightly on your average performance. Consider the variability in that performance as well, and seek to improve consistency along with your averages. You already have all the data you need to do that. Just by looking at two numbers rather than one, you may be able to take your company well beyond what the competition is doing.

David A. Taylor, Ph.D is a writer and consultant in the area of supply chain technology and performance. He can be reached through his Web site, www.supplychainguide.com.