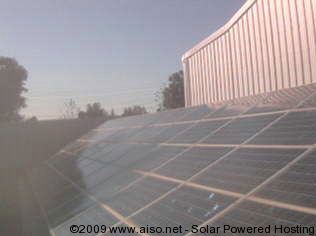 All of AISO's servers are running AMD processors with VMware's virtualization technology to reduce cooling and electrical requirements to the bare bones, which works out to roughly a 60/70:1 ratio of virtual servers to physical servers. The company also uses AMD-powered IBM BladeCenter servers, which also results in less heat, and therefore, less power spent on server room cooling.

"To cool our facility we use two air/water units, each of which uses only 600 watts of power at full speed," Nail said. "The units are not old-fashioned evaporative or 'swamp coolers,' they're actually state-of-the-art. They can cool 110-degree air down to 55 degrees with no humidity. We have a total water capacity of 10,000 gallons that will run through the units throughout the year. We catch all the water from our building and solar panels and divert it to a sump, which in turn sends it on to the tanks. From the tanks it goes into the air units. The air units only use a very small amount of water, about 2 gallons per hour, but 50% of that water is diverted back into the tanks for use at a later time.

"We're also going to be installing 40 to 50 more solar panels this year on an awning at the back of the data center. The return air from the air units will be ducted under the panels with special designed boxes to cool the panels, which in turn will allow us to get an extra 15% to 20% in energy from the panels." 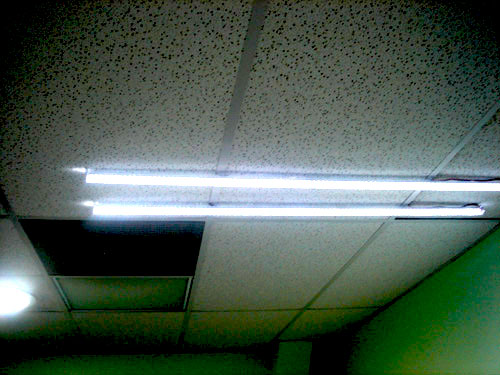 Office interior with solar tube and LED lighting set, which only uses 11.52 watts

AISO's data center and office interior are built of steel and have several layers of environmentally friendly insulation, which gives it an R-value equal to R 50. To keep from having to run lighting during the day, the building has seven solar tubes to bring in natural light from the outside. And to save energy during low light hours and at night, the facility uses LED lighting instead of compact fluorescent or fluorescent light bulbs.

AISO also runs energy-saving virtual desktop computers for its employees. Since these virtualized computers only use 6 watts of power each, Nail said he has plans to install a small wind turbine in front of the large fan on the air units. "Since the fan generates wind speeds of 18 knots, we will be able to produce enough energy to power our desktop units during our work week," he pointed out.

Nail said AISO is also in the process of designing a green roof for its data center. The green roof will be a layer of dirt 3 to 4 inches thick with drought-resistant plants that should reduce the data center's cooling requirements by up to 50%. When finished, AISO will be the first and only public data center in North America with a green roof.

This kind of relentless commitment to environmental sustainability should keep AISO ahead of the competition for true green Web hosting solutions for the foreseeable future. A first step for any serious competitor might be to grab a shovel.