The Bunker is a 10-year-old ultrasecure co-location facility built in a former nuclear bunker in Kent, England. The 18-acre site is surrounded by a 3-meter-high barbed-wire perimeter fence. The underground data center is an ex-Ministry of Defense nuclear bunker encased in 3-meter-thick reinforced concrete walls. The only entrance is through a security check point, protected by bulletproof glass and electronic barriers. In addition to this physical security, The Bunker has an onsite security team made up of ex-military and police supported by guard dogs who patrol the facility 24/7/365.

Although The Bunker provides a variety of hosting platforms, it's especially enthusiastic about open source software: The company's director of security, Ben Laurie, was the creator of Apache-SSL.

Far and away, the most tricked-out converted nuclear bunker is the Pionen data center located 30 meters below the bedrock of Stockholm, Sweden. Bahnhof, one of Sweden's largest ISPs, created a facility that's a marvel of high-tech design with features like waterfalls, greenhouses, German submarine backup engines, and simulated daylight, not to mention a huge 2,600-liter saltwater fish tank. 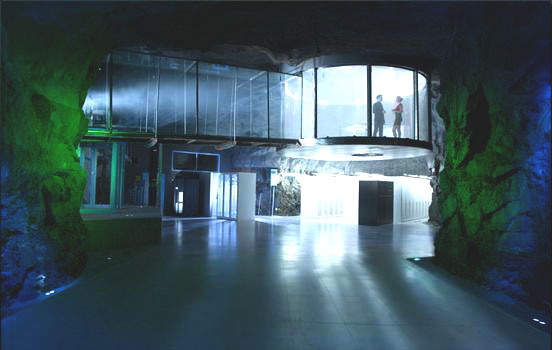 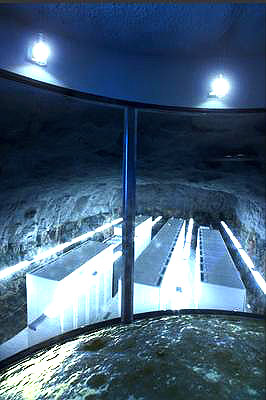 
"Since we got hold of this unique nuclear bunker in central Stockholm deep below the rock, we just couldn't build it like a traditional -- more boring -- hosting center," he said. "We wanted to make something different. The place itself needed something far out in design and science fiction was the natural source of inspiration in this case -- plus of course some solid experience from having been a hosting provider for more than a decade."

Regarding the visual inspiration for the facility, he said, "I'm personally a big fan of old science fiction movies. Especially ones from the '70s like Logan's Run, Silent Running, Star Wars (especially The Empire Strikes Back) so these were an influence," Karlung said. "James Bond movies have also had an impact on the design."

Karlung admitted that he had actually looked for the same outfit as the villain "Blofeld" featured in several Bond movies and had even considered getting a white cat, but came to the conclusion that might be going a bit far.