I'm all for a way to work around Office ribbons, a set of interface elements introduced in Office 2007 that I characterized last September as "visually unbalanced." Ribbons degrade Office usability. I wrote in September that "they force extra clicking around for routine work and make it hard to find less frequently used functions." Microsoft is now, essentially, pleading guilty. Search Commands' Guided Help, in addition to calling the awkward process of "browsing for commands by clicking tabs" a "usual method," says Search Commands is "especially useful for finding commands that you use less often."Search Commands reinforces a point I've made in the past, that too often we look to search as a remedy for design lapses.

If we view computing as the discipline of automating information management, then search is the computing world's second oldest profession. If the Web browser is the Net's #2 killer app (lagging only e-mail), search is its eminence grise, finding sense in what is otherwise a largely inchoate tangle of pages and links. On the Web, you need a tool to chase down otherwise-unlocatable information that you know is out there. Search is that tool. 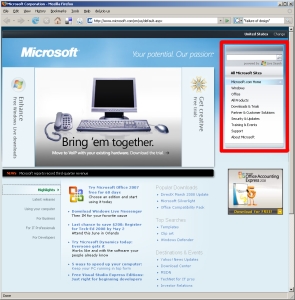 Corporate pages are different, or at least they should be: corporations control their content, and they're supposed to understand their stakeholders. Why is it, then, that a search box is prominent on just about every Web site that delivers more than a minimal amount of content? Check out, for example, the prime real-estate, encircled in red in the screen shot at right, given over to search at microsoft.com. The answer is that on corporate Web sites, search is too often a kludge, a findability fix, just what Search Commands is to Office 2007.

Thirty-three years in business, and Microsoft still doesn't know how to make their Web content findable? But Microsoft is not alone, not by any means. You'll find similar prominence given to search on media and corporate sites alike. (I chose the two sites linked to in the preceding sentence without checking them out first, I was so sure they'd highlight search.) Help me Tim Berners-Lee, you're my only hope.

The prevalence of search boxes on Web sites and in over-designed, under-usable applications alike indicates that we're unable to organize and present information in ways that make it easily found by site visitors and users. I do mean "we" because standardization and structure that would boost findability is too often lacking from our Web sites and applications. Semantics — meaning-based computing — is a/the answer on the Web. I don't have a clue what can fix bloated applications. I do know that search is no more the long-term answer than animated paper clips.

I've tried Office 2007 Search Commands and I like it. Since a return to the pre-2007 Office interface seems unlikely, I hope Microsoft will turn what is now a limited prototype into a core feature of the Office product line. Search Commands fixes an interface that should never have been broken, but since design short-comings are the rule Web-wide, at least it does nothing worse than introduce a near-ubiquitous kludge to the venerable Office suite.Cheers to Microsoft Labs for their release of Search Commands, an Office 2007 add-in that "helps you find commands, options, wizards, and galleries in... Word, Excel, and PowerPoint." The embedded Guided Help calls it "a useful complement to the usual method of browsing for commands by clicking tabs on the Ribbon." But with Search Commands, Microsoft has adapted a findability fix that's quite common on the Web: Search as a crutch. Search Commands reinforces a point I've made in the past, that too often we look to search as a remedy for design lapses...