Tennis fans can check out 'SlamTracker' stats, player-movement tracking, via latest IBM supported innovations for Grand Slam tennis events.
Doug Henschen
Executive Editor, Enterprise Apps
June 22, 2012
Tennis fans will be able to check out the "Keys to the Match" using the analytic SlamTracker system at Wimbledon.com. Developed by IBM to support all four Grand Slam events (the Australian Open, French Open, Wimbledon, and the U.S. Open), SlamTracker is an online dashboard that serves up match-by-match analysis based on seven years' worth of Grand Slam data, which translates to about 39 million data points. The system mines data on match outcomes by player, aces, faults, errors, playing surface, and more, then models the patterns likely to emerge in a pending matchup.

"It's not a prediction who will win; it's a look at what each player needs to do well to have a higher likelihood of winning," explained John Kent, program manager of IBM Worldwide Sponsorship Marketing, in an interview with InformationWeek. 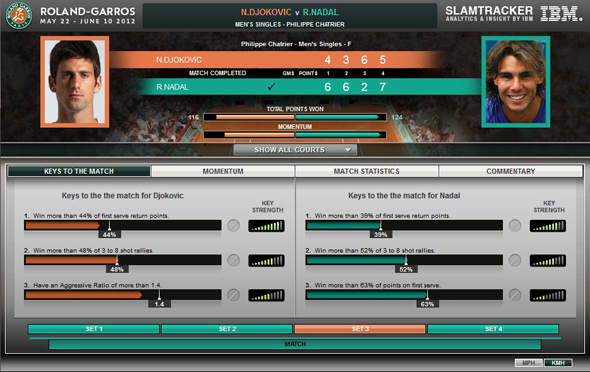 [ For more on the use of analytics in sports, see Analytics Drives Next Generation Of Moneyball In Sports. ]

IBM hopes to get to the next level of tennis analysis starting next week at Wimbledon with IBM SecondSight, a camera-based system that tracks players' movement and how their performance changes throughout a match. The technology is similar to the Pitch FX and Field FX systems used by Major League Baseball and Stats Inc.'s SportVU technology used by the NBA to show shot location, rebounding, and the positioning of offensive and defensive players. SecondSight had a trial run last year on Court 18 at Wimbledon, but this year it will be used for the first time on Center Court.

"There's a discussion in tennis about whether you can carve up the court into quadrants and look at the style of players and see how it impacts their performance when you force them to run," Kent said.

If SecondSight analytics prove to be as insightful as location-based information has been in other sports, IBM says it will add the data and related analyses to SlamTracker next year's Wimbledon tournament. Capturing and analyzing the 3D coordinates of players and the ball on every point and match on Center Court will obviously add to the scale and complexity of IBM's analytics challenge. The company says its DB2 database and SPSS analytics are used behind the scenes.

There are currently more than a two dozen possible keys to a match, but Kent said about a dozen consistently show up "key strengths" that players need to exhibit in order to win. These insights are available before each match, and the performance against goals is updated in real time along with the score as each match unfolds. The goal is to boost engagement on each of the four Grand Slam sites.

"The primary driver of site visits by far is checking the scores," says Kent. "Even in the case of the U.S. Open site, which features a lot of video, live video is right after live scores as the most popular content."

To handle the peak traffic loads and data analysis demands during tournaments, IBM has moved all four Tennis Grand Slam sites as well as the Masters & U.S. Open golf sites into a heavily virtualized private cloud. Wimbledon.com, for example, is expected to draw more than 16 million unique visitors over the next few weeks, but traffic will dwindle as this year's tennis season comes to a close.

"In the past we had dedicated servers for these sites, but now we can provision a new Web server within three minutes by literally pushing a button," Kent said, noting that the private cloud is built on IBM Power Servers and same infrastructure used for tech giant's SmartCloud.

Professional sports are increasingly large consumers of technology and technology services. In addition to its relationships with the tennis Grand Slams and the Professional Golf Association, IBM until recently provided data center support to the National Football League through a nine-year-old partnership. Earlier this month an IBM spokesman said the company chose not to renew the NFL deal. No additional details were available from IBM or the NFL.

IBM has been supporting Wimbledon, the French Open, and the U.S. Open for more than 20 years and the Australian Open for 19 years.

At the Big Data Analytics interactive InformationWeek Virtual Event, experts and solution providers will offer detailed insight into how to put big data to use in ad hoc analyses, what-if scenario planning, customer sentiment analysis, and the building of highly accurate data models to drive better predictions about fraud, risk, and customer behavior. It happens June 28.